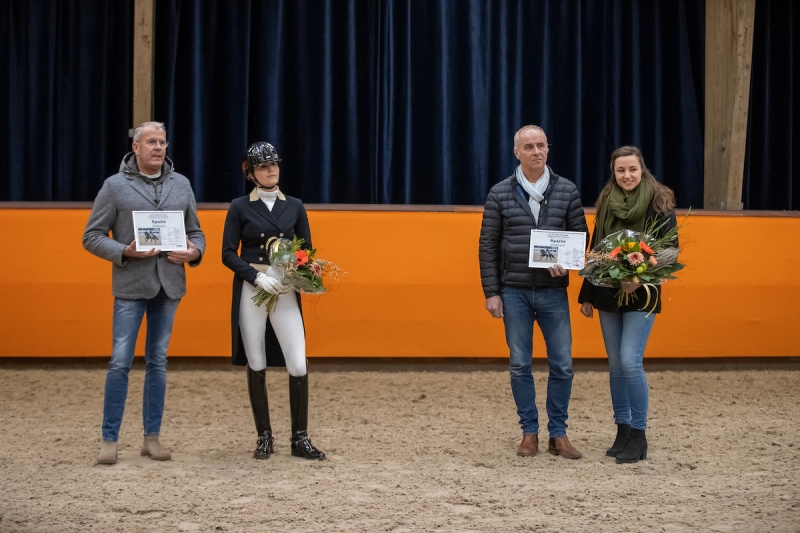 Just now, the Grand Prix-stallion Apache was awarded the preferent predicate, two years after he was declared keur. UB40-son Apache performed at Grand Prix level himself and passes on his sport qualities to his offspring. This resulted in a breeding value of 154.

During a pre-recorded item, Gerard van der Koppel, son of Apache’s breeder Tonnie van der Koppel, owner Ad Valk and rider Emmelie Scholtens shared their insights in the stallion. “As a foal he was already an exquisite mover,” reviews Gerard. Ad tells that he was very fast as a young stallion, his offspring have that same eagerness as young horses, too. “You have to be able to manage that, then the quality emerges quickly.” Footage was shown of Apache in his sports career with Emmelie, but also of his son Indian Rock. This stallion was crowned champion of the stallion show as a three-year-old and is one of the six KWPN-approved sons of Apache. In addition, his sons Cum Laude, Grand Galaxy Win, Hometown, Improver VDT and Intro K are licensed by the studbook. Apache also positively influences breeding from the second generation, in Lennox U.S., Ladignac and Lewis he has three KWPN-approved grandsons.

Grand Prix offspring
The offspring of Apache stand out at all levels of dressage. A number of his oldest offspring is already active in the Big Tour, among them Gio of Charlotte Dujardin, Gaudi Vita of Joyce Heuitink, Ferrari STH of Jeanine Nekeman, Flanell of Veronique Roerink and Hot Chocolate of Esmee van Gijtenbeek. Another extraordinary horse by Apache is the stallion Jovian, the 2019 champion of the World Breeding Dressage Championships for five-year-olds. “Many people were a bit wary of the offspring of Apache, thought that they were unwilling to work”, says Emmelie about his children. “But I think the exact opposite is true.”

Preferent
The preferent predicate is awarded to stallions whose offspring is at least eleven years of age, who positively distinguishes themselves in passing on conformation and sports qualities and have an index of over 140, with a minimal reliability of 85%. 249 Apache-daughters are registered at the studbook, 71% of them obtained a ster predicate or higher. His breeding value is 154 and the associated reliability of 97% is remarkably high. His breeding values for conformation and free movement of 108 and 144, respectively, with a reliability of 96% are well above average.