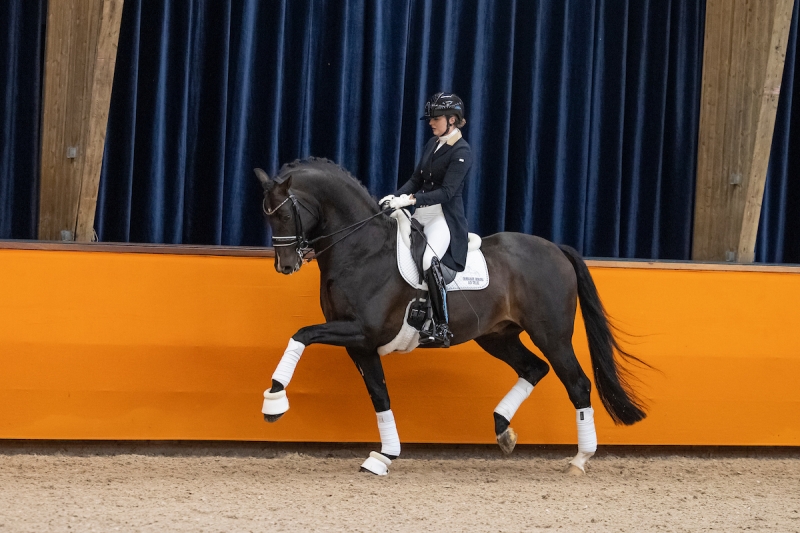 Viewers had a blast during the online KWPN Stallion Show. In a pre-recorded show, four World Championships stallions of the I-crop put on an alluring performance. The eight-year-old stallions demonstrated their potential for the international sports.

Monique Peutz regrets not being able to set out for Verden with this group. “I am positive we could have done well in Germany. Fortunately, we can still show these stallions to the Dutch public via an online program,” says Peutz on behalf of the selection committee.

Mega-talent Indian Rock
Indian Rock, the previous champion of the KWPN Stallion Show, is one of the greatest talents of his year. The Apache-offspring (out of Crisjena keur pref IBOP-dres by Vivaldi, bred by J. de Bruin in Schelluinen) has been impressive from an early age already and now he has become even more expressive in the collected elements.

Impression
Ridden by Diederik van Silfhout, the Don Schufro-son Impression (out of Wicara elite pref IBOP-dres PROK by Ferro, bred by M.J.C. Maat of Doorn) already claimed the silver medal in the Small Tour class at the Dutch National Championships. In the online show, available on demand via KWPN.tv, Impression illustrates his top qualities. “Especially the collected work is one of his strong suits”, explains Peutz. “Impression displays lots of balance throughout. Another stallion for which we have very high hopes.”

Imposantos impresses
The macho Imposantos (Wynton out of Zarina elite IBOP-dres PROK by Krack C, bred by Willy Wijnen of Berlicum) secured the ZZ-Zwaar title at the Dutch National Championships. A landslide victory, as the ease and lightness in which the stallion cooperates with Bart Veeze is of the highest level.

Congenial In Style
According to Monique Peutz, the sympathetic In Style (Eye Catcher out of Sissy van Lorentin I, bred by Joop van Uytert of Heerewaarden) forms a beautiful combination with Renate van Uytert. It would have been the third World Breeding Championships for Young Horses in a row for this stallion. “What stands out is that In Style persists his self-carriage and pure beat gaits throughout all his exercises. He continues to engage his hindquarters and keeps a lovely posture.”

Join the experience at KWPN.tv
If you are a member, you can watch the videos of the pre-recorded show on demand at KWPN.tv.