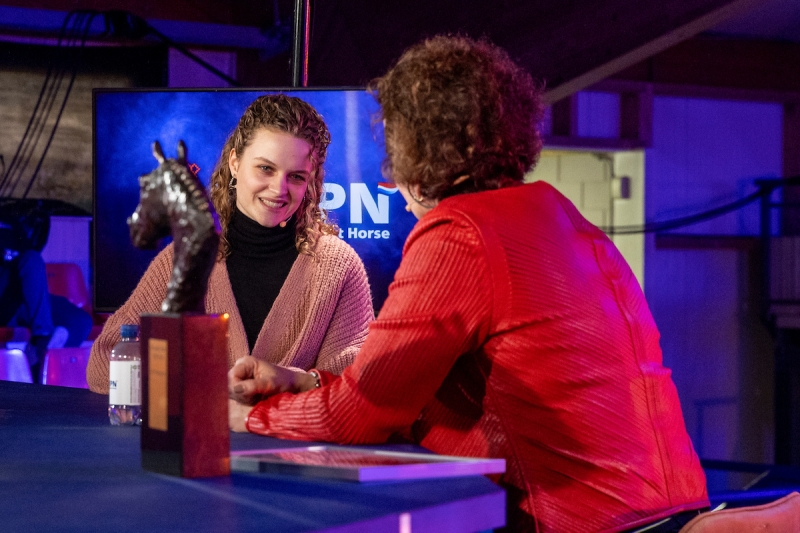 Champion stallion Glamourdale has won the title Dressage Horse of the Year. The in 2011 born stallion received nearly 2000 votes and won the title by a landslide. For that reason, Jasmijn van der Velden, granddaughter of Glamourdale’s breeder Joop Rodenburg, came down to the studio to accept the very first Jazz Trophy.

As a three-year-old stallion, Glamourdale was crowned champion of the KWPN Stallion Show, then he was approved at the studbook with 85,5 points. The stallion, owned by Gertjan van Olst, went to Charlotte Fry and this combination turned out to be a perfect match. They won the World Breeding Championships for seven-year-old dressage horses in Ermelo and by now made their debut in the Grand Prix. During the ceremony footage was shown of the stallion’s impressive sports career. “We are extremely proud to name Glamourdale Dressage Horse of the Year”, responds Charlotte. “I want to thank all his fans for voting for him.”

Jazz Trophy
Jasmijn was twelve years old when Glamourdale was born. “For me he was just as nice and cute as all the other foal”, she says. “My grandfather dreamed about breeding an approved stallion. But we could have never imagined it to turn out like this. We try to follow him closely. Last summer, we visited a training, it is great to see his progress every time.” Joop was a passionate breeder, now his children and grandchildren continue his work. Today, Jasmijn accepted the first Jazz Trophy from Charlotte Dekker. “We are sure to find a nice place for it in my grandma’s house!”

More information and the programme of the KWPN Stallion Show can be found at the special page.