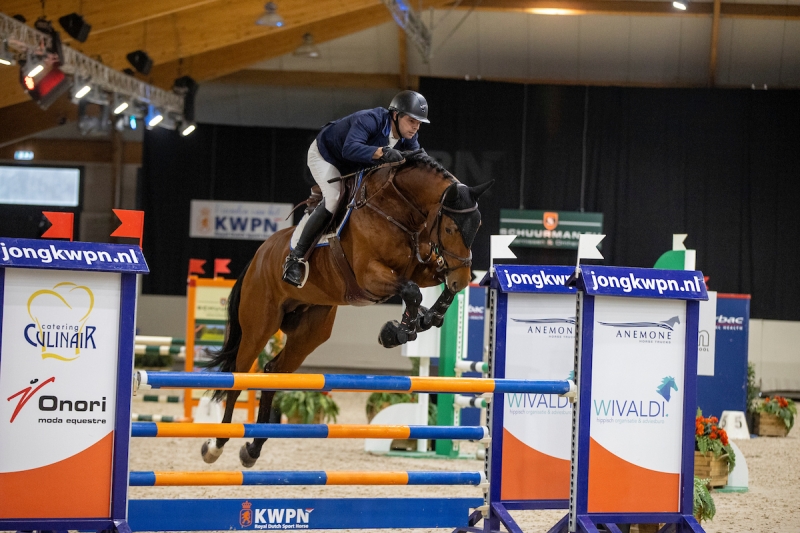 To put the young KWPN-approved stallions in the spotlight, an ability test powered by Blom was organised during the Online KWPN Stallion Show.

Due to the corona measurements, it must be an ability test, not a competition and therefore no rankings were drawn up. Nevertheless, it was an interesting presentation that provided breeders with a lot of information about the jumping qualities of the stallions.

Top score for Lambada Shake AG
Fourteen approved stallions born in 2016 participated in ability test that comprised two matches. Henk van den Broek and Hester Klompmaker formed the jury and provided the stallions with some explanatory notes. Aganix du Seigneur-son Lambada Shake AG (out of Grappa AG by Spartacus, bred y Alex Gisbertz) of Hendrix Stables, Jan van Meever and the Lammers family performed two clears and received the best remarks: 9.5 for jumping and a 9 for rideability. Back then, the bay stallion was approved with a top score of 90 points and he now was ridden by Pieter Keunen. “I think we are dealing with a future phenomenon! He jumps exactly how you want to see it: with lots of reflexes, scope and power”, exclaimed Hester Klompmaker enthusiastically.

Natural ability
Another strong result was obtained by Lord of Farming HS (Balou du Rouet out of Doutzen stb by Clinton, bred by Gebroeders Bosch of Luttenberg) of Jan Schuttert. Ridden by Pim Mulder, his two legs were rewarded with two 8.5s. Connect-offspring Lingo van de Watermolen (out of Happy Wiggy stb by Carambole) of breeder Jan Greve made sure to cast no doubts about his natural ability under Steven Veldhuis.

Good quality
After the in 2016 born KWPN-approved stallions, it was time for six stallions from the K-year to make an appearance in the ability test powered by Blom. Again, Hester Klompmaker and Henk van den Broek were tasked to give the marks to the stallions. In both maches, last year’s stallion competition winner scored best: Kincsem (by Carrera VDL out of First Buresco elite IBOP-spr sport-spr PROK by Ginus, bred by Aat and Nick Smit) made a lasting impression with his owner Marc Houtzager. “Kincsem stands out with his unlimited scope. He is thinking ahead and after the landing immediately retains his balance, this is giving us high hopes for the higher levels and the jump-offs!”, told Hester Klompmaker. In the second round the remarkable chestnut received two nines. This score was equalled by the champion stallion of 2018, Kannan Jr. (Cornet Obolensky out of Van Meta ster sport-spr PROK by Quick Star) of breeder Kramer family and Sjaak van der Lei. Ridden by Wolfgang Zimmermann, the grey stallion stood out in his balance, attitude and athleticism.

Read all about the ability test in the next edition of the KWPN Magazine. More information and the program of the KWPN Stallion Show can be found on the special page.