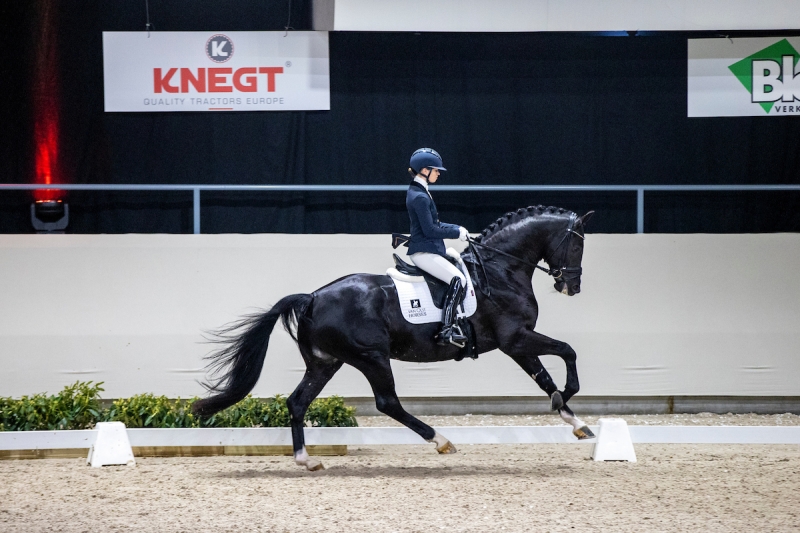 During the ability tests powered by Anemone Horse Trucks, the jury awarded two stallions with the ultimate 10. The young stallions gave us a look into to their progress and were provided with some comments and marks by our judges.

Due to the corona crisis, the Pavo Cup and Anemone Horse Trucks stallion competition were cancelled. Many young stallions were therefore not presented in public since the KWPN Stallion Show of last year. For that reason, an ability test was organised today. The horses were not placed, and no ranking was drawn up, but this afternoon has certainly provided the interested breeders with lots of information.

10 for trot
First, the approved stallions born in 2016 were presented. The sizeable stallion Las Vegas (Ferdaux out of Dalia Delin ster voorl. Keur PROK by Wynton, bred by John Deenen from Heijen) of Nico Witte from Schijndel and Horsecentre De Dalhoeve in Ommeren caught the eye with his appealing trot, for which he received a 10. “A horse with so much ease, freedom in the shoulder and uphill frame”, said jury member Joyce van Rooijen-Heuitink enthusiastically. “He performs the trot elements with such ease and light-footedness. He also has a good, pure-beat and powerful walk. His canter displays abundant power and impression, easy transitions and always an uphill posture.”  Las Vegas and Franka Loos earned a total score of 89 points, his canter and overall impression received a 9. The Don Romantic-son Lord Romantic (out of Veroniek elite pref sport-dr D-OC by Krack C) of breeder Adri van Erp from Heesch was also granted multiple 9s. He received the note for trot and harmony.

Kjento receives ultimate 10
Afterwards, the stallions of 2015 entered the ring for the ability test powered by Anemone Horse Trucks. Top talent Kjento (Negro out of Zoriana elite pref prest ibop-dr PROK by Jazz, bred by Ad van Os from Sprang-Capelle) obtained the highest notes: he received a 10 for his trot and scored a total of 90 points. “Kjento trots with a superb hind leg, he is powerful, light-footed and easily collects and extends”, said Joyce. “He just beams the word Grand Prix. That’s why we gave him a 10. In the beginning he was a little insecure in the trot, but eventually it was really good. He canters with such impression, power and always uphill, a 9.5. The overall impression also earned a 9.5, in every gait he demonstrates his talent for collection, but also the extensions come so naturally.” A 7.5 for walk and an 8.5 for harmony brought the total to 90 points. Two other stallions scored a 9, GLOCK’s Taminiau (GLOCK’s Toto Jr out of Vitamin C elite pref prest PROK by Sandro Hit, bred by Jan Holtland from IJsselmuiden) of GOCK HPC NL in Oosterbeek obtained this mark for his walk. Kyton (Ferguson out of Wilbria keur pref IBOP-dr by Ferro, bred by Willem Goesten from Berkel-Enschot) of Rom Vermunt Jr from Geesteren and Harld and Jeanette Bruinier-van den Ham from Spankeren, received 9s for the walk and harmony and even a 9.5 for canter with Bart Veeze. His total added up to 89 points.

Read all about the ability test in the next edition of the KWPN Magazine.