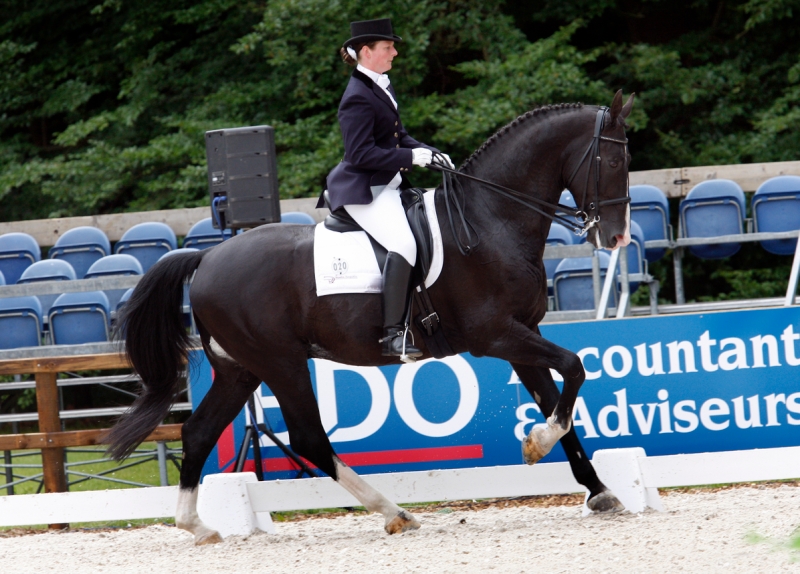 The pitch-black Gelder breeding stallion Rubus B (Ahoy out of Alpenroos keur pref by Pygmalion) died suddenly yesterday at the age of 23.

Bred by Mrs H.A. Post Kettelerij from Hall, Rubus B was already in the possession of Gerrit te Bokkel from Eerbeek as a foal. The foal grew in a short time to an honest and reliable stallion, easy to handle and versatile.  These are a few words that can also be read in the performance report of this pitch-black eye-catcher.

At the age of 6, Rubus B and his then rider Daniëlle te Bokkel were already competing at Z level in dressage. In 2006, they reached 4th place in Z2 dressage at the regional championships of Gelderland and 8th place at the Hippiade. After that, the combination also achieved beautiful successes in the ZZ-light and ZZ-heavy classes. Together they had the points to be allowed to start in the small tour.

Rubus B also made his debut in an album film by the band Haze from Zelhem in 2006. The stallion was filmed like a real movie star in the busy city centre of Arnhem and in the Sonsbeek Park. This marked his good character. Even after his sports career, Rubus B remained a family friend in addition to his breeding services. He taught cousin Siebe the basics of driving and he could bring Sinterklaas several times with the carriage to the schools of the (grand)children. And of course he enjoyed the wonderful rides in the woods on the Veluwe. Rubus B has clearly passed on his golden character and mostly colour to his offspring. The family Te Bokkel and the employees of Stal te Bokkel will miss him very much,