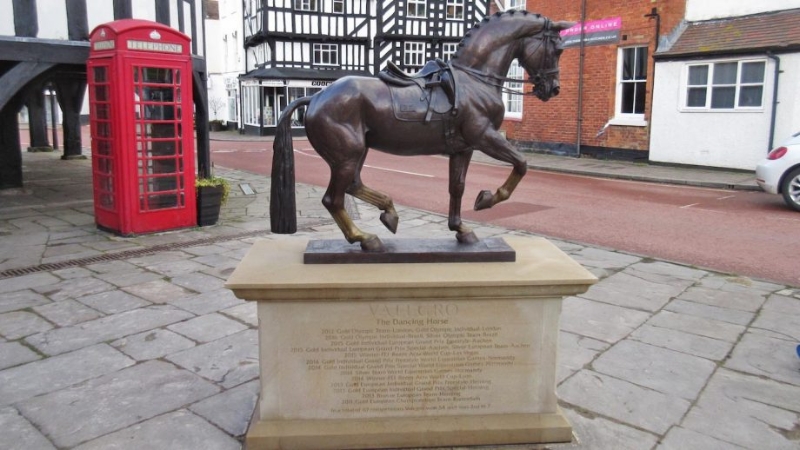 Valegro has taken centre stage in his home town Newent, as his bronze statue is placed in its permanent home.

The statue, sculpted by Georgie Welch, was erected in the Gloucestershire town’s Market Square in a low-key ceremony, owing to Covid restrictions.

A spokesman for the Newent Initiative Trust, which was behind the project with involvement from Carl Hester, Charlotte Dujardin and groom Alan Davies, said lockdown meant the unveiling plans were not as the not-for-profit organisation had hoped.

“Originally, we had planned a very special and public unveiling of the bronze statue of Valegro, the dancing horse, but unfortunately it all happened very differently,” he said.

“The statue was finished in September last year, and found itself being placed in the International Centre for Birds of Prey just outside Newent for safekeeping until it could be installed.”

A private unveiling of the statue took place in October 2020 attended by special guest Valegro, alongside Carl, Charlotte and Alan.

“Due to the restrictions prevailing we were forced to limit the number of attendees but at the same time wanted to let people know the statue was finished,” said the spokesman, who added that the plan to put the statue in place in the Market Square had taken longer due to council paperwork.

The statue was put in its “rightful place” on Thursday (18 February).

“We purposefully did not advertise that the statue was being erected due to the ongoing Covid restrictions,” said the spokesman.

“The bronze statue, after nearly three years of work, now stands proudly next to the old market house in Newent, where he can be safely viewed and admired by all for his amazing successes. We hope that when the pandemic is over, we can bring Valegro and his team down to see his statue.”

Carl Hester said he and Charlotte are “delighted”.

“He changed so many of our lives and elevated our sport so this is a really proud moment for myself, Charlotte and everyone who has been involved with this very special horse,” he said.

“Thank you to the sculptor Georgie Welch and all involved who made this happen.”