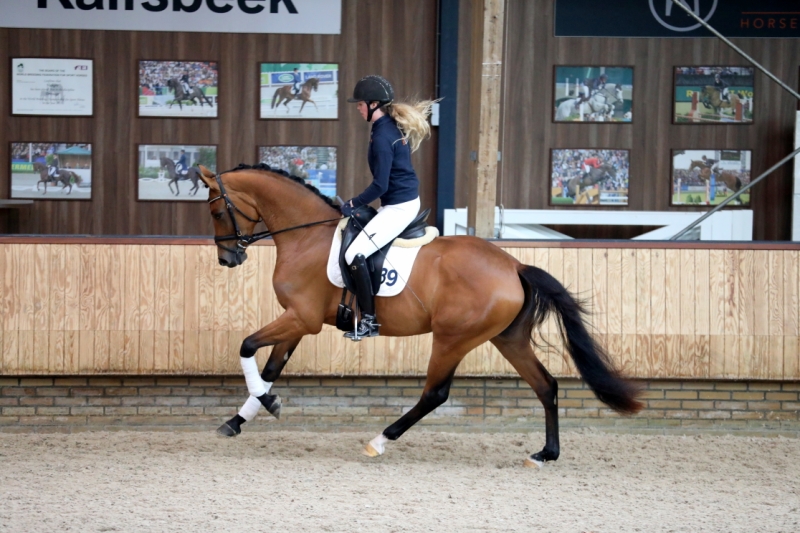 In this week, we dug into the database for the EPTM dressage mares. In 2019, the For Romance daughter Funkemarie was the EPTM topper with 93 points. Which mare will win the title this time and was the best in 2020 or in the first quarter of 2021?

The EPTM is a popular ability test, which is gladly used by the various breeders and owners. Via the EPTM test, you gain insight into a mare's natural talent for the dressage or jumping sport. It is also possible to have the mare prepared to be ridden two weeks prior to the regular test. There have been six EPTM exams in 2020 and two exams in the first quarter of 2021. In total, 42 dressage mares passed in 2020. The average total score for the successful dressage mares in this period was 77.8 points. Among the dressage mares, GLOCK's Toto Jr. is the most common sire with nine successful EPTM mares, followed by Daily Diamond and GLOCK's Dreamboy with five mares.

Top score
Expression daughter New Girl, bred by E.T ten Bosch, received a top score of 86 points. Inspector Marcel Beukers spoke very positive of this mare: "New Girl moves with a lot of flexability and has a spectacular trot: with a lot of technique, in which she can switch easily well and moves uphill. In canter she has clearly developed positively during the test in terms of balance, because she has become stronger."

85 and higher
Last year and the first quarter of this year, many quality mares were tested in the EPTM. Besides the outlier that scored above 85 points, there are also twelve dressage mares that have achieved 80 points or higher. 84 points were given to the dressage mare Madonna (by Fürstenball), bred by Y. van Vliet. This mare received a 9 for the movements, rideability and talent. Inspector Floor Dröge said afterwards "Madonna is a mare that stands out with her rideability and workability. The past five weeks she has developed very well. She walks with a lot of space, purity and activity. In trot she switches very well and she has a hind leg that always moves in the right direction." GLOCK's Toto Jr. daughter Ma Chère Murona, bred by J.J.M. van den Broek, scored 83 points in total, including two 9s for her walk and workability. Another GLOCK's Toto Jr. daughter, Make My Day, scored 82. The mare bred by B. Lichtendahl received a 9 for her trot.

Achieving the elite predicate
In just a few weeks, it is possible for a young 'green' mare who is submitted for the EPTM test to go home with both the EPTM and elite predicate. After the EPTM examination, it is possible to participate in the studbook inspection and the Central Inspection. Last year, 32 dressage mares became elite. In order to become elite after passing the EPTM, the mare must be in possession of the D-OC or PROK predicate. If not, the mare is promoted to keur. Last year, 4 dressage mares were promoted to keur.