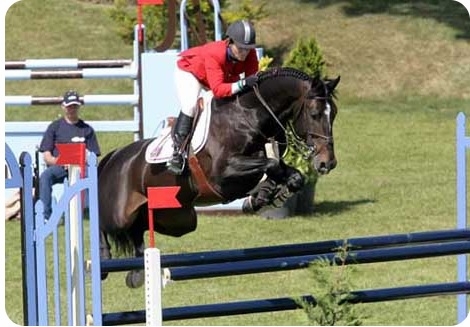 At a respectable age of 30 years old, Judgement (by Consul) has passed away. The first in America bred KWPN approved stallion performed for years with Beezie Madden.

The news was announced on John and Beezie Madden's Facebook page. " We are saddened to hear of the passing of Judgement ISF, but so proud of the long life he led and legacy he leaves behind. He changed our lives, and I am forever grateful to Mary Alice Malone for giving me the opportunity to ride Judgement at the beginning of my career. He made us better horsemen and there was no better feeling than heading in the ring at Spruce Meadows with him," said Beezie Madden. "He rose above himself time and time again. That's why we are so grateful that he has enjoyed so many more wonderful years of retirement at Iron Spring Farm, where he was wonderfully cared for to the end."

Judgement was born in 1991 and won around 1.5 million dollars (by Consul out of Faletta ster pref by Akteur, breeder Iron Spring Farm) won around 1.5 million Dollars. The KWPN horse was for years in the US team and participated in two World Cup finals, the World Equestrian Games in Jerez de la Frontera and ten Nations Cup competitions. His career highlights include winning the million-dollar CN International at Spruce Meadows. He remained active in the sport until the age of 18 and has also earned his reputation as a sire. In 2005 he was recognized by the KWPN based on his own sport achievements and under the NAWPN he produced Grand Prix show jumpers such as Counselor, Worlds Judgement, Judge Not, Better Judgement, Ghiradelli and Judgement Call.