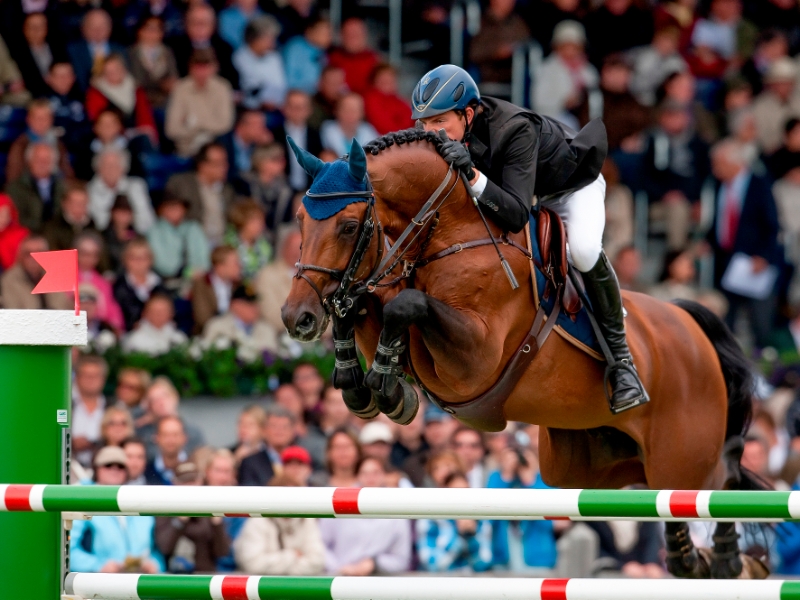 The KWPN holds first place in the World Breeding Federation for Sport Horses (WBFSH) Studbook Ranking for dressage, jumping and eventing. A unique achievement that is a result of the work of all the Dutch warmblood breeders who are breeding with great passion and a critical eye. The KWPN is an open studbook and encourages breeders to use the best genetic material, for example by automatically granting the top 10 stallions of the WBFSH Sire Ranking the KWPN recognized status, so their offspring can be registered in the foal book directly.

Since the beginning of 2018, the KWPN automatically recognizes stallions that hold a position at the top 10 of the WBFSH Sire Ranking. They have clearly positively distinguished themselves in breeding. In the March issue of the KWPN Magazine, the highest-ranked jumping stallions in the most up to date WBFSH Sire Ranking have already been extensively highlighted.

Natural predisposition
The majority of the best-producing stallions performed at the highest level themselves. The entire Top 9 has shown at a young age that they have a lot of talent and all of them have jumped at 1.60m level. It is no coincidence that they have developed into top progenitors. Stallions can only inherit their natural talent, and it turns out this can be estimated very well at a young age. This was recently shown, for example, in the 5* Grand Prix of The Dutch Masters, where the KWPN-approved stallions Grand Slam VDL and Grandorado TN ‘left their business card’. Both ten-year-old stallions were approved with the KWPN at a young age with high marks. The natural talent of a horse, in combination with the right management, attitude and the necessary luck regarding the absence of serious injuries, can ensure that a horse can perform at the intended level. That’s the simple result of the ‘phenotype formula’: meaning that a horse’s performance is determined by its genotype, so everything that he genetically carries or ‘what nature gave him’, and the environmental influences, such as how it is fed and cared for, which rider he ends up with and how well he is managed from a sporting point of view. In breeding it is only about the genotype: the natural predisposition.

Diarado
A stallion that has stood out from an early age and is now proving to be a top sire, for example, is newcomer Diarado (by Diamant de Semilly), who was part of the WBFSH top 10 for the first time in 2020. This sixteen-year-old sire is the only stallion born after 2000 at the top of this classification. Diarado was honored as champion at the Holstein stallion selection as a three-year-old. Not only in freedom, but also under saddle, Diarado was convincing. He subsequently developed into the stallion with the highest points in the ‘Hengstleistungsprüfung’ (stallion performance test) and then performed strongly in the young horse competitions, such as the BundesChampionat where he won bronze. Diarado got a lot of interest from the breeders right from the start and later classified under Jonas Vervoort in the sport at international 1.45m/1.50m level. What is also very special is that Diarado is not only listed in the top 10 among the jumping stallions, but also among the progenitors for eventing. In 2020, Diarado advanced from sixth to second in the WBFSH Sire Ranking for eventing.

In the dressage direction, it’s also mainly the stallions who proved themselves in the sport, that are part of the top 10 of the WBFSH Sire Ranking. The KWPN approved stallion Johnson has knocked his sire Jazz off the top position: both stallions have performed at the highest level. With Hans Peter Minderhoud, Johnson took part in the Olympic Games in Rio de Janeiro, European Championships in Aachen and the World Equestrian Games in Caen. Jazz, now paced second, left no doubt about his dressage talent as a young horse. Later, he shone in the big sport under Tineke Bartels, including participating in the World Equestrian Games in Jerez de la Frontera in 2002. Sandro Hit, who placed third in 2020, was proclaimed World Champion as a six-year-old and then, like his two predecessors Johnson and Jazz, has fully proven himself as a Grand Prix sire. Other top 10 stallions, such as two-time World Champion Florencio (fifth), the successful Vivaldi (sixth) and the Grand Prix stallions Fidertanz (seventh), Blue Hors Don Schufro (eighth) and De Niro (tenth) have also distinguished themselves from an early age and subsequently performed at a higher level. A string of successful offspring ensured that they are now part of this top 10.

The following stallions are KWPN recognized based on their top 10- classification with the WBFSH Sire Ranking:

Different registries
The KWPN has always been an open studbook and encourages breeders in various ways to use the best available genetic material for breeding. To make further progress, breeders can combine stallions from foreign registries with their KWPN mares, or breed KWPN foals with mares that are registered with foreign KWPN recognized studbooks. Since the extension of the registration schedule, an initiative from the Breeding Council that was introduced in 2018, much more is possible for horses with foreign registered parents. Horses can be registered with the KWPN in the foal book, studbook (only for horses from three years old), register A or register B. Due to this expansion, more than 12,000 horses are included in the foal book, which would otherwise be registered in Register A. You can participate in all KWPN events with a foal book, studbook or Register A horse now, such as talent tests, young horse competitions and inspections. Register B horses cannot participate in inspections, but they can participate in young horse competitions, such as the Blom Cup and Pavo Cup. Previously, Register A mares had to meet additional requirements to be included in the studbook and to obtain a possible predicate. Now this is only necessary to convert the ster predicate into the keur or elite predicate. To acquire the Keur predicate, a Register A-mare must, in addition to the requirements for talent (through the IBOP, EPTM or by their sport results), also meet the additional health requirements.

Additional requirements
However, these additional requirements lapse if the sire is approved by a recognized studbook and meets certain conditions, such as a sport classification at a certain level and health requirements. This ensures that offspring of quite some ‘foreign’ stallions can still be included directly in the foal book (see textbox ‘Directly in foal book’).

Exempt
Stallions whose offspring are directly included in the foal book, because they have met the additional conditions, are, for example, the dressage stallions Chinook (by Vivaldi), Sorento (by Sandro Hit), Belissimo M (by Beltain), Samba Hit II (by Sandro Hit), Delatio (by De Niro), Nintendo (by Negro) and Just Royal Dancer (by Jazz). Regarding the jumping stallions, these are well-known names such as Douglas (by Darco), Epleaser van 't Heike (by For Pleasure), Glasgow van 't Merelsnest (by Nabab de Rêve), I'm Special de Muze (by Emerald van 't Ruytershof), Twister de la Pomme (by Darco), Tyson (by Numero Uno) and Cassini Gold (by Cassini I). This means that these stallions are on the same level as KWPN-approved and recognized stallions, although much more information is available to breeders about KWPN-approved stallions. Performance reports, dam reports, descendant reports and breeding values ​​contain a lot of valuable information that the breeders can take into consideration when making their breeding decisions. The complete list of stallions that meet the conditions is published on the KWPN website under ‘Directly to’.

Sports results are leading
The KWPN is a performance-oriented studbook and therefore the focus will always lie on sport. This resulted, among other things, in these expanded KWPN regulations, with more KWPN recognitions for stallions and broader registration options. This also ensures that mares can easily be included in the studbook in various ways and qualify for a predicate. In addition to the traditional studbook inspections, one can also opt for the home inspections, where mares with the sport predicate can immediately get a ster predicate. Or it is possible to get direct studbook admission after participating in talent tests and young horse competitions. Four- and five-year-old mares that participate in, for example, the Blom Cup, Stal Hendrix or GMB competition can also get a ster predicate directly based on a conformation assessment and performance during the competition. This makes it possible to assess the intended use even closer and makes it as accessible as possible to have ridden horses included in the studbook and granted a predicate.