Keur stallion OO Seven passed away at the age of 25 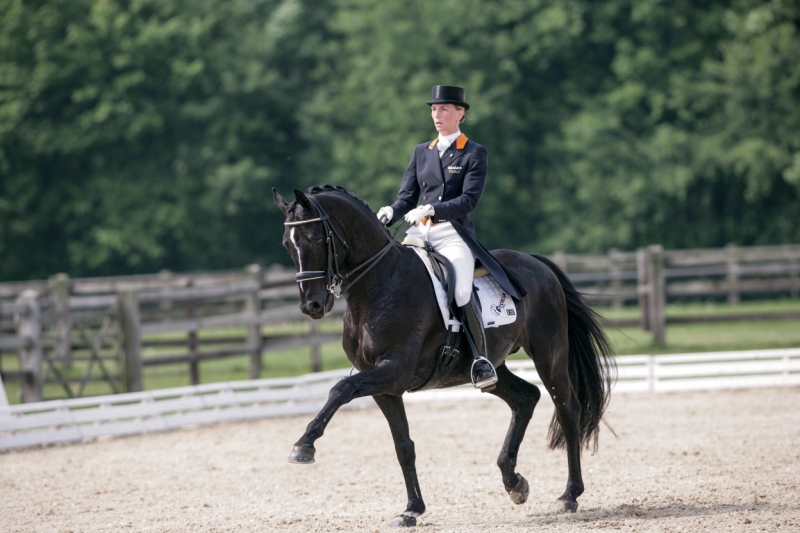 Australian rider David Shoobridge has announced that the KWPN-approved stallion OO Seven, with which he performed at Grand Prix level, has passed away at the age of 25.

The stallion OO Seven (Rubinstein I out of Gelbria ster prestatie by Doruto), born in 1996 at the stables of Isabel van Gisbergen-Sponselee, has had an eventful life. As a three-year-old he was KWPN approved with nines for his trot, canter, and predisposition as a dressage horse. Afterwards, he started his sports career with rider Imke Schellekens-Bartles, who successfully competed him in the Pavo Cup, stallion Competition and the World Championships for Young Dressage Horses. The duo also achieved success at Small Tour level. After an injury, the Rubinstein I son continued his career with Joyce Lenaerts, who describes him as a “very positive and pleasant stallion to work with.” At the age of 15, OO Seven made his Grand Prix debut, and not long after that he was sold to Australia for sport and breeding purposes. With owner David Shoobridge, he subsequently performed at international Grand Prix level. In 2015, OO Seven received final recognition by attaining the KWPN keur predicate.

Strong dressage genes
With his good performances in sport and breeding, OO Seven lived up to his pedigree. His dam Gelbria is a full sister of the famous international top dressage horse Olympic Barbria, ridden by Tineke Bartels. Besides OO Seven, Gelbria also produced the Grand Prix dressage horse Kadans (by May Sherif) and is known as the grandmother of the Grand Prix horses Voice (by De Niro), ridden by Edward Gal and Agent de Jeu (by OO Seven), ridden by David Shoobridge. OO Seven himself produced several offspring that competed at Grand Prix level, such as Uvana, Valenzo, Vedet, Vladimir Z, Zodana, Union, Balette, Zek Sollenburg, Winston, Vindicator, Vinterpol and Valentino S.

Influence
A total of 896 offspring of keur stallion OO seven are KWPN registered. His son Zuidenwind (ds. Jazz) is KWPN approved, and he is one of the OO Seven offspring who performed at Grand Prix level. The KWPN approved stallions El Capone (by UB40), Feel Good (by Contango) and Golden Gate (by Blue Hors Zack) come out of daughters by OO Seven. Of the 458 daughters, 48 ​​have achieved the ster predicate, nine are keur and 23 are elite. Six daughters passed the mare test, 25 the IBOP and 57 have the sport predicate.