The End of a Legend: World Cup Winner Simon (22) 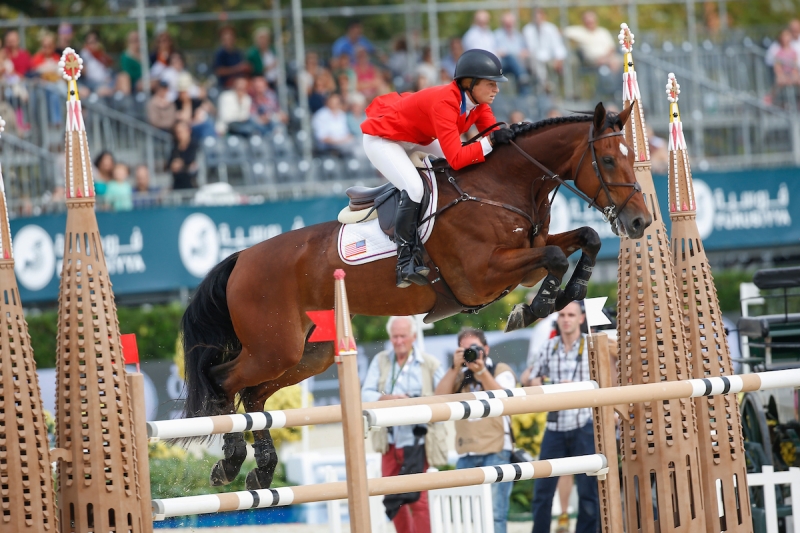 Beezie and John Madden announced yesterday that KWPN ambassador Simon (by Mr.Blue) has passed away at the age of 22. He was very successful with Jeroen Dubbeldam and Beezie Madden.

Simon (Mr.Blue out of Naline ster prestatie D-OC by Polydox), bred by M.J. Vermeulen from Altforst,  has grown into a top class jumper. Eric van Grunsven discovered him at the age of four and had him trained by his former stable rider Martijn Verpoort. They took all their time with Simon and the duo was cleared the 1.45m classes of Jardy, Zuidlaren and Wiener Neustadt.

Jeroen Dubbeldam
The Van Grunsven brothers then had the top talent trained and shown by Jeroen Dubbeldam at the end of the year, when he was 9. With Jeroen, he was given every opportunity to develop further as an international show jumper and that turned out very well. At the beginning of 2009, they made their debut at the international competition in Zwolle, where they immediately made a clear round. In February, Simon jumped his first 1.50m course in Neumünster, immediately cleared the course . In March, Simon already made his debut at Grand Prix level in a magnificent way: he came in second in a strong field of participants at the Grand Prix of Den Bosch. It turned out to be the start of a striking career. In May, they won the Grand Prix of Eindhoven. In 2010, they booked a double-zero result in Calgary's delicate Nations Cup, something only matched by Olympic champion Hickstead. In addition, they also won the prestigious Spruce Meadows Grand Prix. The combination also won the Verona World Cup Qualifier later that year.

Top performance
The year 2011 was an absolute top year, including a third place in the Leipzig World Cup Final and a sixth place at the European Championships in Madrid in 2011. In addition, the Dutch team secured Olympic qualification with fourth place in the Nations Cup. In the same year, they were part of the Dutch team three times. In Aachen and Rome, Simon and Dubbeldam managed to win the Nations Cup, while in Rotterdam the Orange Quartet finished fourth. In Rotterdam they finished second in the Grand Prix, in Rome they finished third, and in Den Bosch they finished second in the World Cup qualifier.

Striking transfer
Dubbeldam and Simon grew into one of the best performing combinations in the world and with that, the international interest in the top-class gelding also grew. After months of speculation, the news came out in November 2011: it would be irresponsible to keep Simon any longer for Dutch sport, although the duo was destined for great Olympic opportunities. At the time of sale, a few weeks before the Olympic deadline, Simon was placed as the world's best showjumper on the WBFSH ranking. Through the intervention of Johan Heins, the Mr.Blue son came into the hands of Abigail Wexner, sponsor of the American top rider Beezie Madden. After a conservative start, they were able to string together the successes later. They achieved victories in the Surpass Grand Prix in Wellington, the Grand Prix of CSI3* in Hagyard (1.60m) and a win in the prestigious Queen Elizabeth II Cup in Calgary. Their biggest success was winning the World Cup Final in Gothenburg in 2013. A year later, they finished seventh in the World Cup Final in Lyon and they took the fourth place in 2015. Simon became a fixture on the US team and enjoyed his well-deserved retirement in 2017.