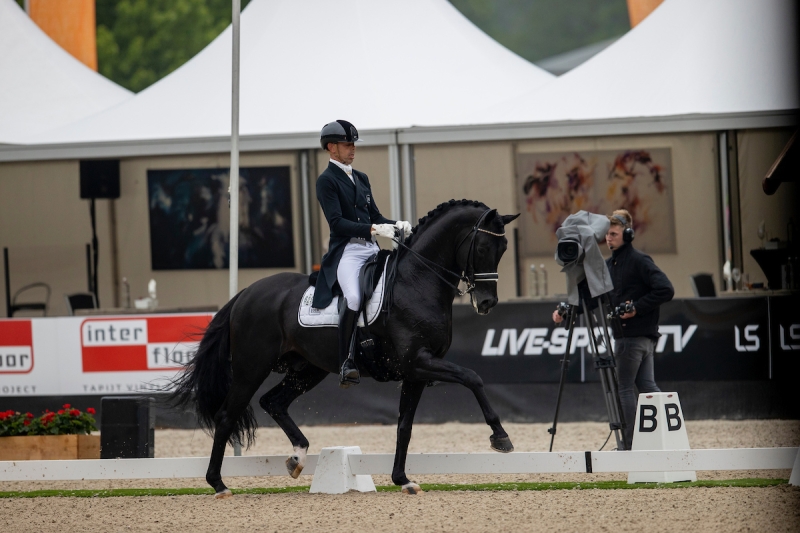 At the Nations Cup of The Nederlands, both the Dutch dressage and showjumping teams managed to win at home turf. The perfect preparation for Olympic Games in Tokyo.

In Rotterdam, the Dutch show jumpers got the chance to appear at the highest level one last time before the teams for Tokyo were announced on Monday. Maikel van der Vleuten had two clear rounds with the Bustique son Beauville Z, Willem Greve and Zypria S N.O.P. (by Canturo) only had one time fault. Marc Houtzager showed that his Sterrehof's Dante N.O.P. (Canturano out of Zidante ster IBOP-spr sport-spr D-OC by Phin Phin, breeder J.W.J. Soeter from Stokkum) is in top condition and in great form. He finished just outside the time in the first round, in the second round the mare knocked one rail down. Frank Schuttert and Lyonel D (by Little Joe) replaced Harrie Smolders, who broke a rib last week. Ermindo W

In the final, the Dutch team took the victory with only 7 penalty points, Sweden finished in second place with 9 penalty points. Rolf-Göran Bengtsson achieved the best result for Sweden with the Singapore son Ermindo W (out of Aziza-W elite sport-spr PROK by Carinjo, breeder A.P. de Wit from Reuver). The pair stayed clear in the first round and had one time penalty in the second round.

After the Grand Prix, the Dutch dressage team was already in the lead, in the Special and Freestyle to music they managed to keep that top-position. In the Grand Prix Special Hans Peter Minderhoud and the Vivaldi son GLOCK's Dream Boy N.O.P. (out of Resia elite PROK by Ferro, breeder: Tim Coomans of Oud-Beijerland) took the win. The pair showed to be in top-form towards Tokyo and unanimously led the scoring board with a personal best of 78.894%. “Dream Boy had his best show ever here in Rotterdam”, summarizes Hans Peter. “Even in the Special, he worked with me superbly in everything. It was just really good. Overall, Dream Boy was super focused, he did his best. He has made a lot of progress in one season. I really feel that if we keep the form and I can fine-tune a little more here and there, it can be beautiful in Tokyo.”

Dinja van Liere and Hermès (Easy Game out of Bukkie keur pref EPTM-dres by Flemmingh, breeder G. Gijsbers from Loosbroek) are facing disappointment, the FEI keeps the stallion away from the Olympic Games in Tokyo. Despite the fact that the combination made more mistakes in the Special than in the Grand Prix, they finished second with 73.489%. “Fortunately, Hermès is always there and he was again today”, Dinja reacts right after her test. “People say, ‘It's great that you're riding again’, but that's the only thing I can influence myself and what I'm good at. I have a top horse in Hermès. There were a few mistakes in the test that I wouldn't have had otherwise, but that might have arisen from my own tension. Hermès feels that too, he is so sensitive. It got progressively better towards the end of the test.”

The freestyle was won by the German rider Isabell Werth and Weihegold (by Don Schufro). Edward Gal rode his young talent GLOCK's Total US (Totilas out of Sondra s.Sir Donnerhall, breeder Gestüt Lewitz from Steinfeld GER) to second place using his famous Totilas-kür. The KWPN-approved stallion received 84.280% from the judges. “Total was much more relaxed than last Thursday. I was very pleased with that. It is such a great feeling that he is making so much progress in such a short time.” Edward had two horses to choose from for Tokyo, Total US and GLOCK's Toto Jr. N.O.P.. In the end he choose Total US, Toto jr. is his reserve horse.

Fourth was another son of Totilas, the gelding Go Legend DVB (out of Litchy elite sport-dres pref prest PROK by Ferro, breeder Stal Wittenberg) ridden by Marlies van Baalen. The difficult freestyle of this duo was appreciated with 77.695%. “This was the second time I rode this Freestyle and then in such an entourage. Go Legend finds music rather scary, so we opted for calm music and a test with a very high level of difficulty. There is always room for improvement, but I felt he was great for now. Everyone also says that his outline is really beautiful. Go Legend suits me very well. I can now get ready for Tokyo. Then I go with my own horse, bred by my in-laws and self-trained. Absolutely fantastic.”

Meggle's Boston and All At Once

A KWPN horse was also part of the German team. Johnson TN son Meggle's Boston (out of Orpa elite prest PROK s.T.C.N. Partout, breeder Mts. Pleyter of Zalk) scored 73.0% under Matthias Bouten. This was good for third just behind Dream Boy and Hermès. In preparation for the Olympic Games, the KWPN-approved stallion All At Once (Ampère out of Wynona RB elite prest IBOP-dres sport-dres D-OC, breeder Stal 104 BV of Wijdewormer) was also in Rotterdam. Under the saddle of his Dutch based rider Yessin Rahmouni, the stallion competes for Morocco. The combination finished ninth with a score of 71.095%.