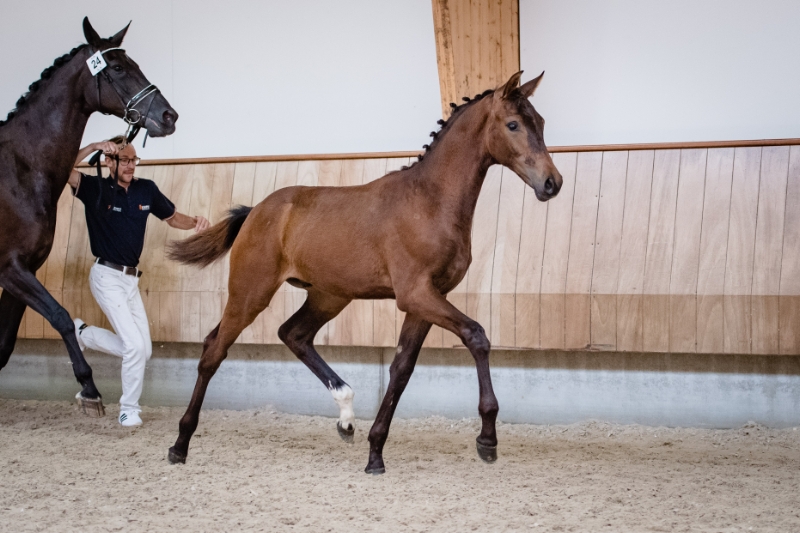 After a successful first edition, the second KWPN Online Foal Auction is now online. If you are looking for youngsters for sport and breeding, you should not miss this collection! There are amongst proven sires also young and upcoming talents whose offspring will get a chance.

From Friday 30th of July it is possible to bid on a combined collection of 38 auction lots. Which expire on Monday, August the 2nd from 8.00 PM.

The nephew of 1.60m classified Urian
Romeo (by El Salvador) is the nephew of Urian (by Orion Fortuna) who competed at 1.60m level. And nephew of Amorka (by Epilot) who started in 1m30 classes. Interesting fact: father El Salvador is currently stabled at the residence of the Belgian Olympian rider Jerome Guery.

Revillion comes from a mother line which has produced many successful stallions. A daughter of Comthago out of a Quidam de Revel mother. Who in combination with For Pleasure already produced the BWP approved Levall. This mother is also the half-sister of the 1m40 Zangersheide stallion Expo, and of the 1m60 jumping horses Oriander (v.Coriander) and Alpapillon Armani (v.Aldatus). Vincent Voorn won teamgold in 2007 with Alpapillon Armani at the European Championship in Mannheim.

Out of the full sister to PSG and fourth level dressage horse
Among the seventeen dressage foals on offer are eleven colts. In many cases closely related to family members who perform in sports. Or are approved as stallions. Rebellion (by Blue Horse Zackery) attracts attention not only with his looks. His dam is the full sister of the PSG dressage horse Four Motion. And from Zione who will be competed at fourth level.

Free bloodline
Racoon B (mf. Bojengel) can count on a free bloodline with the sire Fontaine TN. Something that is very desirable in dressage breeding. He comes from a Dutch dressage line that produced several Z1 and Z2 horses. Besides the PSG classified Tamora (by Olivi) and the third level dressage horse Scaramouche (by Metall).

Mother Izzy no less then 90 points for trot
Rizzy (by Lennox U.S.) is a direct son of the highly tested mare Izzy. This daughter of Olympiad stallion Glock’s Dream Boy scored 90 points for her trot at the studbook inspection. And the parts of movement and canter were rewarded with 85 points. An interesting pairing with the KWPN reserve champion of 2019 Lennox U.S.

Aroused interest
All information about the foals is included with each auction lot. Including the veterinary reports which were made during the photo and video day can be found there. If you still have questions about the auction or one of the foals. Then a KWPN inspector is always available to answer these questions. For this you can contact Mairin van der Tol via salespromotion@kwpn.nl or +31(0)341-255 511 or with KWPN inspector Wim Versteeg +31(0)6 54 20 18 00.