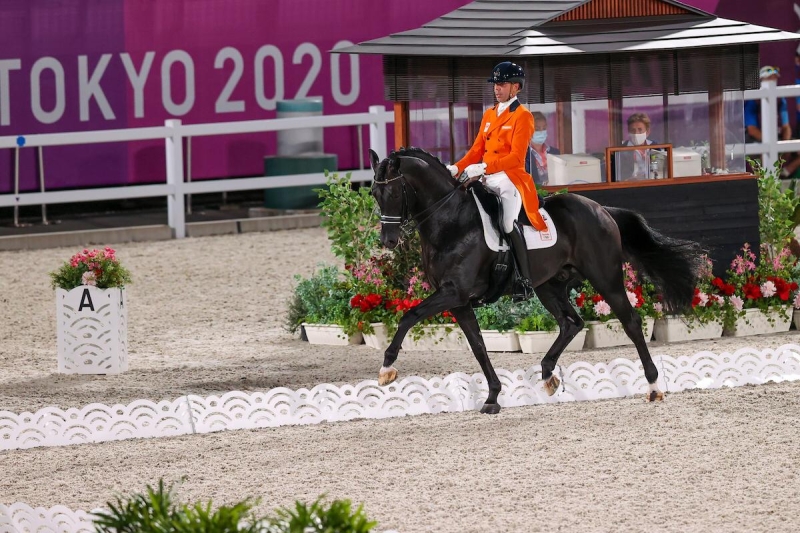 Today the final for the team medals in dressage takes place. In the Grand Prix Special, the riders start in the reverse order of go of the qualification. After all participating countries have had their first two riders in the ring, a one-hour break follows. Then the intermediate rankings are drawn up and that determines the order of go of the last rider for every country. 24 combinations will make their appearance in the Grand Prix Special. Out of the 24 horses, 12 are KWPN-bred or recognized.

Gio
Reigning Olympic Games winner Charlotte Dujardin was consistent in her second test with Gio in Tokyo, however they encountered a few more errors compared to their first test. And yet, a solid personal score of 77.23. This earned her team Great Britain a bronze medal. The tempi changes every other stride went well, but there was a mistake in the changes every stride. On the other hand, there were lovely half-passes and a beautiful piaffe/passage, also on the last line. Among all the large, dark horses the more compact Gio stands out every time. The chestnut gelding is bred by H.J. de Jong and Ad Valk. The Apache-son comes out of elite mare Zenzi (s.Tango). She is also the dam of Enzos Armani, the successful Grand Prix-horse of Jill Huybregts.

GLOCK's Total US
After the first two riders of every nation had competed, a one-hour break followed. During this break the intermediate rankings were officially drawn up and this determined the starting order of the last combination for every country. In the third and last group, each country was represented by their top scoring combination. For the Netherlands, this was Edward Gal and his Glock’s Total US. Rider and horse outdid themselves, what an expression and eagerness was shown by the black stallion. It started with an excellent extended trot. In the collected canter Edward could simply place his hand forward while Total US kept on going nicely. He looked both eager and relaxed. The elevation in the passage was of great class. The half-passes were also beautiful. Unfortunately, there was a slight glitch after the piaffe and passage on the last line. Definitely a top-notch performance. The score was now 7479. Glock’s Total US (Totilas x Sir Donnerhall) is merely nine years of age and bred by Gestüt Lewitz. He made quite the impression as a three-year-old when he was the vice-champion of the stallion performance test, was the four-year-old champion of the semi-finals of the Pavo Cup and Subli Cup and the vice-champion of the Pavo Cup when he was five.

Elegance
Another light-footed and harmonious performance for Elegance and Beatriz Ferrer-Salat. The son of Negro demonstrated a strong collected walk. The passage and piaffe come easy to him, like it did to his father. His movements have a lot of suspension. A pleasure to watch. Beatriz has already competed at the Olympic Games with multiple horses. Elegance’s dam is the elite mare Reina (pref prest sport s.Monaco). She was active at Small Tour level herself. Nick, Elegance’s full brother, is also bred by Gert Jan van Olst and seems the new future talent for Beatriz. 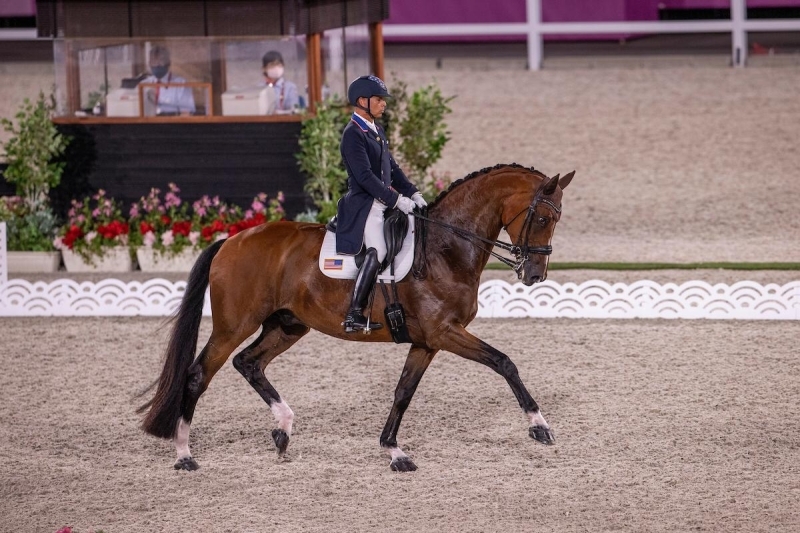 Suppenkasper
Steffen Peters has an all-rounder in Suppenkasper. It is remarkable how easily this XL-son of Spielberg performs the extended and collected gaits. The big bay gelding showed to be very consistent in his contact and his passage was executed with a nice rhythm. The work-willing gelding furthermore demonstrated a great walk and a lovely piaffe. His entire test was a pleasure to watch. Again, a test with no noteworthy errors and this brought the score for the American team to 2558.5. Thus, they are certainly still in the race for a medal. Suppenkasper comes out of Upanoeska (keur IBOP-dr by Krack C). He is born by the name Danny Boy at Frans van der Poel in Haps. Last year he received the title USDF Grand Prix Horse of the Year.

Everdale
Charlotte Fry also completed her second test in Tokyo. The KWPN-approved son of Lord Leatherdale possesses a lovely frame and showed lots of expression in his canter. The piaffe and passage were strong and powerful. The tempi changes every stride and every other stride were flawless and nicely jumped. Charlotte was very satisfied with the performance of her horse and excitedly rewarded him after the test with loose reins. At the same time Everdale spooked and jumped, almost throwing the English rider into the Olympic sand. Charlotte secured a preliminary score of 2528.5 for Great Britain. Everdale is living up to expectations: he was the performance test champion of 2012 and won the Pavo Cup a year later in a convincing manner. Everdale was bred by late Piet Kluytmans out of elite mare Aliska K (Negro x El Corona).

GLOCK's Dream Boy
It is clear that almost every combination had to find their rhythm in their first test at the Olympic Games, Hans Peter Minderhoud and GLOCK's Dream Boy included. Today the black stallion displayed more peace and relaxation. He showed an excellent extended walk, and his canter was very strong. The son of Vivaldi performed the tempi changes every stride without any flaw and impressed in his half-passes. His last extended trot was exemplary. In the piaffe he could show a little more impression at times. One combination to go, Hans Peter is bringing the score for the Dutch team to 2512.0. Dream Boy’s dam is the elite prestatie mare Resia (Ferro x Balzflug). The stallion was bred by Tim Coomans. As a six-year-old he obtained bronze at the World Breeding Dressage Championships for Young Horses in Verden.

Buriël KH
Juliëtte Ramel and Buriël KH showed both harmony and expression in this test. His strong collected walk and rhythmic piaffe earned great marks. The son of Osmium also showed a progressive extension in the canter. The first pirouette was slightly too big. The piaffe and passage at the last line were exquisite. The score for the Swedish team is now 2491.0. Buriël KH is bred by the Bakker family in Oterleek. At a young age he already drew attention. In 2016 he and Juliëtte also qualified for the Olympic Games in Rio de Janeiro. His dam is Ronja KH (s.Krack C). In addition to Buriël KH, she also produced the Grand Prix-horse Azurro. Juliëtte is a sister of Antonia Ramel, who performed her test earlier today with Brother de Jeu. 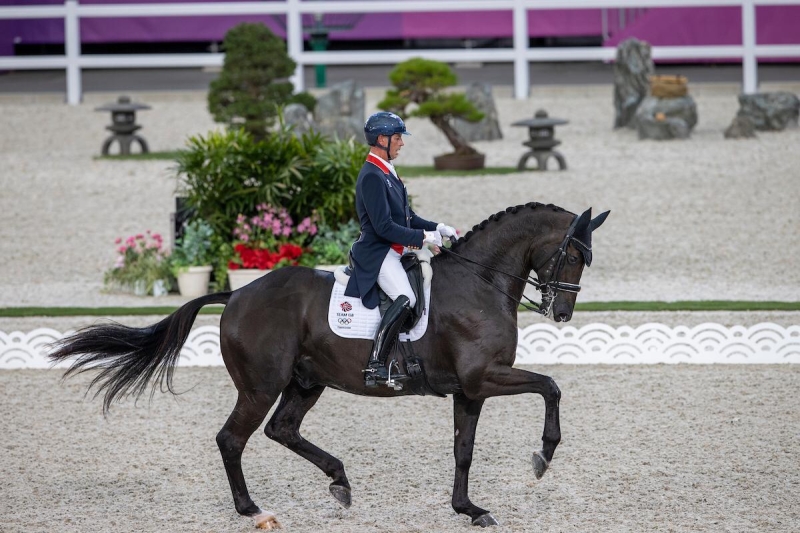 En Vogue
While a sloppy piaffe and a mistake in the tempi changes brought down the score in their first performance, the representative of Great Britain Carl Hester has now completed a nearly flawless and flowing test with En Vogue (s.Jazz). The big gelding continuously showed beautiful contact and attentive ear play. Lovely passages and both pirouettes in a good rhythm. Correctly executed tempi changes rounded the test off. Following the last piaffe En Vogue transitioned into the walk, yet nevertheless the excellent test yielded a score of 2577.5 for the English team, currently placing them second. The entire British team is aboard KWPN-horses! En Vogue comes out of Nicarla (elite prestatie sport-dr s.Contango). The twelve-year-old gelding is bred by the late Adriaan van de Goor in Herpen.

Zack
Nannna Skodberg-Merald entered the ring for Sweden on her Zack. The remarkably moving bay stallion kept on showing a lovely frame. His passage was rewarded with solid points, just like his good tempi changes every stride. Unfortunately, he was a little uneasy in the mouth every now and then which disrupted the harmony. Still, a good test that brought the team score to 2441.5, currently enough for a top-three placement. Zack is approved by multiple studbooks, including the KWPN. He is a son of Rousseau and comes out of Orona (ster pref prest IBOP-dr by Jazz). Zack is bred by Bas Wilschut and was crowned champion of the 2007 KWPN Stallion Show. 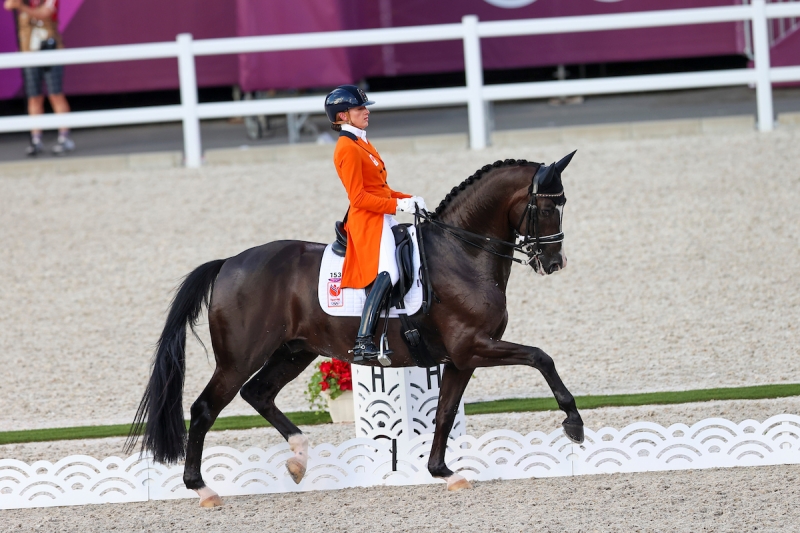 Go Legend
Marlies came out of the ring much more satisfied than after her first test. Aboard Go Legend she had her vindication today. She started with a progressively ridden first extended trot. In the half-passes the black gelding show lavish strides and great cadence. The passages showed lots of expression and the extended walk was spacious and relaxed. For the critics: two minor glitches in the piaffe. The score for this duo is now 2342.5. Go Legend (s.Totilas) is bred by Wittenberg stables out of Litchy (elite preferent prestatie sport-dr s.Ferro). Litchy is also the dam of KWPN-approved stallions Zizi Top and Painted Black, the latter participated in the 2012 Olympic Games London with Morgan Barbançon Mestre.

Fendi T
The first to take the stage today was Severo Jurado Lopez. He entered the ring with the KWPN-horse Fendi T. In the first test last Saturday, the pair was a bit cautious, today the Spanish rider and his chestnut seemed sharper. Fendi T completed his collections and extensions beautifully, crowned by an attentive ear play. The pirouettes and piaffes were also highlights. Only the last piaffe had an error in the beginning. His score is now 2308.0. Fendi T is a son of Negro and previously competed in the Small Tour with Charlotte Fry. He is bred by W.H.J. Timmers and C.G.C.M. Awater out of the preferent ster mare Sursela (s.Lester).

Starting list
Group 3 includes the KWPN-horses Gio, Elegance and GLOCK’s Total US. The exact starting times are not published yet.