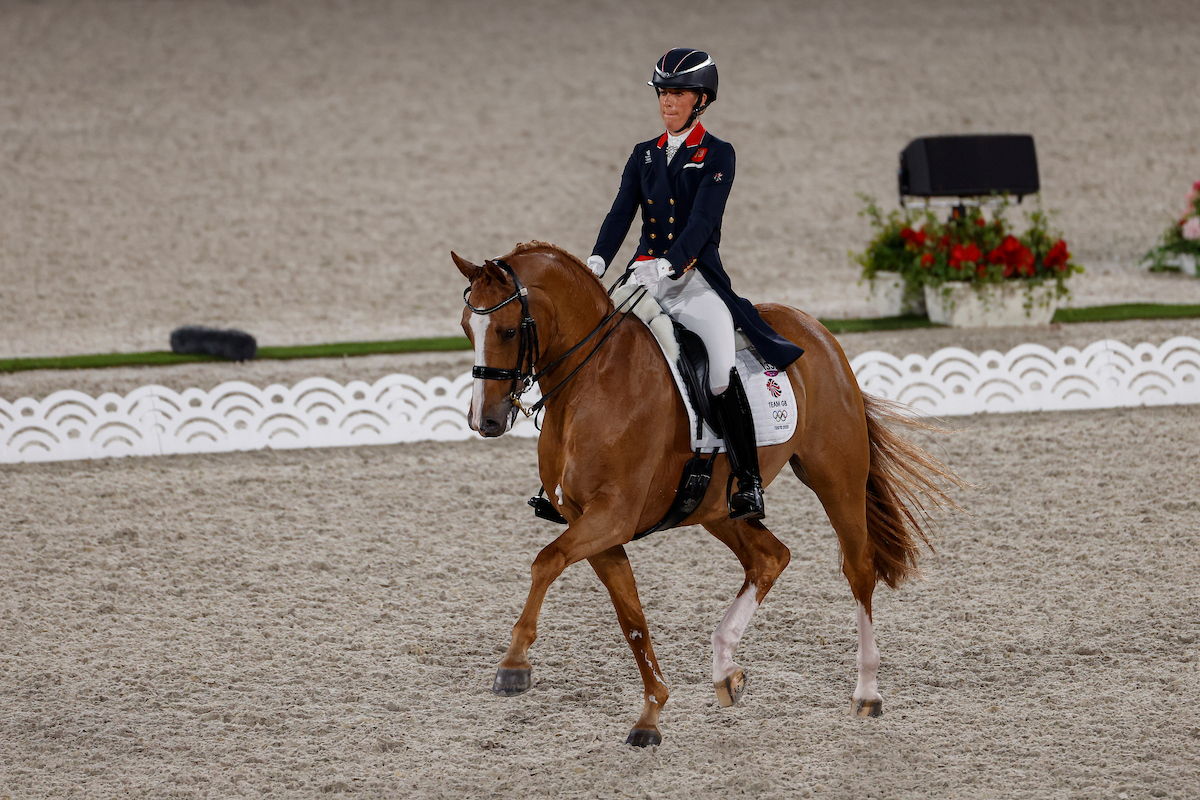 The last day of dressage revolves around the Freestyle to Music. 18 horses are about to enter the arena in this individual final, 9 of which are KWPN-bred and 1 is KWPN-recognized.

Gio
The second to last competitor was Charlotte Dujardin aboard her Gio. This combination carried out their test nearly flawlessly. The one-tempis on the broken line were textbook example and brought in significant points. The work-willingness and eagerness that the chestnut displays certainly has not watered down. The enjoyable ear play, and closed mouth make up for a lovely view. In the piaffe he is not quite Valegro yet, but he is getting close. A score of 88.543 immediately secured a podium place for Charlotte. The chestnut gelding is bred by H.J. de Jong and Ad Valk. The Apache-son comes out of the elite mare Zenzi (s.Tango). She is also the dam of Enzos Armani, the successful Grand Prix-horse of Jill Huybregts.

Glock’s Total US
Not an easy task when the top score of the tipped Olympic champion has just been published. Edward Gal did not let it bother him. He put all his focus into the freestyle to music with Glock’s Total US. How much this black stallion has grown in the last three days. His incredible expression is manifested even more when there is music. One pirouette was sloppy in the preparation, but what a fantastic passage, especially the one on the last long line. The score came down to 84.157, but the performance of this young horse was incredible. Keur stallion Glock’s Total US (Totilas x Sir Donnerhall) is bred by Gestüt Lewitz.

Everdale
At 25 years of age, Charlotte Fry is only at the start of her career. The majority of the Olympic participants in dressage is double her age. The representative of Great Britain has made a lasting impression these three days with her KWPN-approved Everdale (s.Lord Leatherdale). Their freestyle to music was a display of allure and power. A slight miscommunication caused the stallion to spook, but they immediately regained focus. The total score: 80.614. Everdale was bred by late Piet Kluytmans out of elite mare Aliska K (Negro x El Corona). Registered owners Gert Jan and Anne van Olst watched the performance in Tokyo from the sidelines.

Buriël KH
Juliëtte Ramel and Buriël KH are riding under the Swedish flag. The son of Osmium showed a lovely frame throughout the test accompanied by well-suiting music. His collected canter was outstanding. The pirouettes were precisely following the rhythm of the music. The passage on the last line was a highlight. Buriël KH is bred by the Bakker family in Oterleek. At a young age he already captured the eye in the dressage arena. In 2016 he and Juliëtte were also present at the Olympic Games of Rio de Janeiro. His dam is Ronja KH (s.Krack C). She is also the dam of Grand Prix-horse Azurro.

Dream Boy
It is obvious that Hans Peter is experienced in riding a freestyle to music, everything is on point. The transitions were in sync with the music and clearly marked. Dream Boy seemed fresh and responded well to the aids. The half-passes were strong, as well as the canter. It resulted in a score of 80.682, the artistic aspect was rewarded 85.83. The black Dream Boy is out of the second crop of top progenitor Vivaldi and his dam is the elite prestatie mare Resia (Ferro x Balzflug). The stallion is bred by Tim Coomans.

En Vogue
After six combinations, Carl Hester is in the lead with a score of 81.818. Aboard his En Vogue he put on a great performance. The tempi changes every two strides were solid, however there was a small error in the one-tempis. The canter series were exemplary, and the half-passes were right in the rhythm of the upbeat music. For the artistic part the combination scored 85.88. Remarkable is the relaxation of this horse. En Vogue is a twelve-year-old offspring of Jazz out of Nicarla (elite prestatie sport-dr s.Contango). The gelding is bred by the late Adriaan van de Goor in Herpen. Carl represents Great Britain. Fun fact: the entire British team competes on KWPN-horses!

Elegance
Beatriz Ferrer-Salat just entered the arena with Elegance. He is an offspring of Negro and the elite mare Reina (pref prest sport s.Monaco). She was active at Small Tour-level herself. Elegance is bred by Gert Jan van Olst. The music in the freestyle is a somewhat melancholic compilation of classical music that is not a great match for this light-footed horse. In the beginning the bay gelding responded a little hectic to the aids of his rider, but he grew into the test. The passages were a feast for the eye, as well was the last pirouette in piaffe. The score for this performance: 77.532.

Suppenkasper
Steffen Peters, representing the United States, chose light-footed and upbeat music for his freestyle with Suppenkasper. That could not disguise Suppenkasper’s fatigue in the beginning. Fortunately, half-passes and transitions were still executed well, just like the pirouettes. The posture and contact were also very consistent. The bay gelding was born as Danny Boy. Dam is Upanoeska keur IBOP-dr by Krack C and he is bred by Frans van der Poel of Haps. Last year he was elected USDF Grand Prix Horse of the Year.

All In
The American Adrienne Lyle withdrew Salvino (s.Sandro Hit) from the freestyle and the Canadian Brittany Fraser-Beaulieu took her place. She was therefore the first to enter the ring with her All In. The sixteen-year-old son of Tango was in his third test as fresh as on his first day. He kept his ears pointed forward the entire time and the music suited him well. In the changes he is very safe, and he demonstrated a lovely series of tempi changes every stride and every other stride. The extended trot was another highlight. The score was 76.404. The 1.80m measuring All In was born under the name Alex out of the preferent prestatie mare Leontine (s.Damiro) and bred by H. Verstraten in Zeeland.

Zack
The Danish Nanna Skodberg-Merald and her Zack were the second combination to perform. The chosen music suited this powerhouse excellently. He moved with lots of cadence through the ring, maintaining a consistent and lovely contact. Zack also showed well-jumped pirouettes and strong passages. The jury awarded the pair a score of 80.893. Zack is a son of Rousseau and comes out of Orona (ster pref prest IBOP-dr s.Jazz). He is bred by Bas Wilschut and was crowned champion of the KWPN Stallion Show in Den Bosch in 2007.

Draw
The order to go is determined via a draw in groups of six. The combinations with the highest scores in the Grand Prix are in the last group and the six lowest scores in the first group. The competition starts at 10.30 hrs Dutch time.

Netherlands
Hans Peter Minderhoud and GLOCK’s Dream Boy (s.Vivaldi) are the first to start in the second group at 11.45 hrs. Edward Gal and GLOCK’s Total US (s.Totilas) are in the last group following their sixt place in the Grand Prix. Gal starts at 13.20 hrs. Yesterday, Gal and Total US placed fifth in the Spécial.