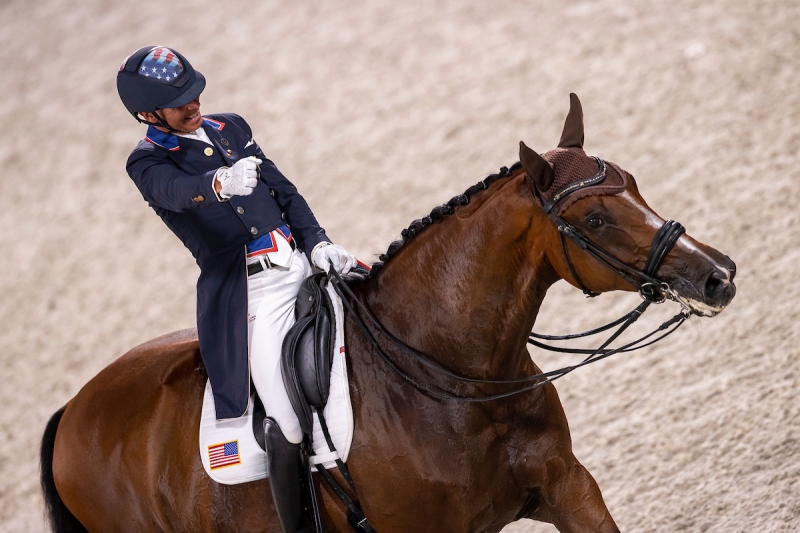 This weekend Suppenkasper, or Danny Boy as he was named at birth, represent the United States of America at the Olympic Games. Breeders Frans and Nelly van de Poel had never expected that. At three years of age, Suppenkasper was sold, but the pair never lost sight of him.

Nelly van de Poel says, “It was a big foal and we kept him until he was three. At that age we brought him somewhere to get saddle broken and be sold. Frans always said: “It is such an easy-going horse; I could have ridden it myself”. But he was really big. He was enormous actually and as a three-year-old definitely not done growing. He was a tad lanky and clumsy too. However, he got more and more beautiful.”

Danny Boy
“As a foal we named him Danny Boy (Spielberg out of Upanoeska keur prest IBOP-drs by Krack), but apparently that was not sophisticated enough”, laughs Nelly. “They called him Suppenkasper, Helen Langehaneberg gave him that name. Frans used to say, ‘It must be an ad or something.’ We liked Danny Boy as well, it is recognizable. So, for us it remained Danny Boy in the beginning, but after some time we gave up on that. It is now Suppenkasper.”

How did Suppenkasper end up in the USA?
“When he was merely three years old, he already reached a height of 1.80m. He then went to Stijn Bruisten, where they started the sales process. Apparently, he already drew attention then. Stijn had him in his stables for just one day when interested buyers paid a visit. They were so enthusiastic, they bought him on the spot. It was an appealing horse,” explains Nelly. So, what was next for Suppenkasper? “In first instance he moved to a girl in Germany, she was a tutor of Helen Langehanenberg and then Langehanenberg bought him. They must have seen something in him, those professional riders are riding just any horse. He then went to Steffen Peters.”

Never out of sight
Nelly tells about the move to the USA. “We thought: ‘What a shame, we will never hear anything from him ever again’, fortunately that was not the case. In the USA they made all these videos of Suppenkasper and placed them on YouTube. That allowed us to always keep following him. We are so happy that he qualified for the Olympic Games, it’s unfortunate that Frans does not live to see it.” She tells proudly: “Steffen Peters wrote once that it was his own fault if things did not go well, because Suppenkasper is incredible. That horse, it’s not him if things don’t go according to plan”, he said. “So, Peters must really love Suppenkasper.”

Dagmar Arts
The dam of Suppenkasper (Upanoeska keur prest IBOP-drs by Krack C) was ridden by Dagmar Arts. When she moved to Heel in the province of Limburg, the distance was too great to keep riding Upanoeska. Nelly: “Frans and I were saddened about this; we would have loved for her to keep riding the horse. But it was too far for Dagmar to drive every day. Frans said: ‘For that girl, I would have bought another horse’, she was such a lovely rider.”

Breeding
Nelly did not grow up with horses she says, “As long as Frans and I were married, I came along. At first, I did not even look at a horse, but we did not have children and then Frans said, ‘I would try and ride a horse.’ Hence, I started and kept going for 30 years. It has been a great time. At first it was only riding and later we regularly started to breed a foal, sometimes two or three foals a year.”

Spielberg
About the stallion choice Nelly says: “We mainly decided together. Frans may have had the final say, but we did it together. Spielberg too, we saw him, and it was such a beautiful stallion. It had to be that one. He was not even approved at the KWPN at the time. It was a risk, but it turned out well. Every stallion has something, and you can listen to everyone else what to do, but it is important to have good feeling about it.”