KWPN in Tokyo #4 | Willeke Bos about All At Once: “He is some sort of Black Beauty” 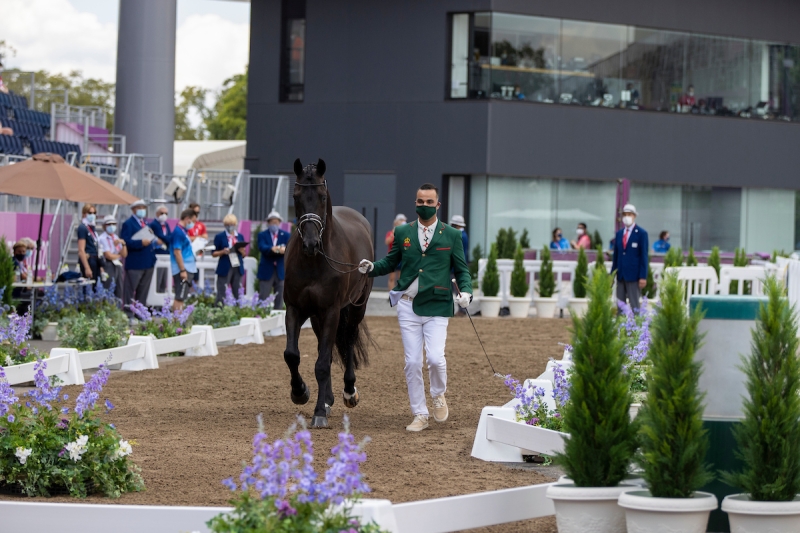 Representing Marocco, Yessin Rahmouni competes at the Olympic Games in Tokyo with KWPN-approved stallion All At Once (Ampère out of Wynona RB elite prest IBOP-dr sport-dr D-OC by Gribaldi). Proud breeders and owners are Patrick van Nek and Willeke Bos (Stables 104). Willeke traveled along to Tokyo and shares the story of this stallion.

“As a foal he was already extremely handsome, but when it’s your own foal you are biased. We called him Flow, he was born via embryo transplantation.” All At Once has a full twin sister Fynona elite pref IBOP-dr sport-dr D-OC, she won gold this year in all the classes of the European Championships for Young Riders under Marten Luiten. Willeke tells “I am very happy that I did not let the mare be pregnant, because then I would have had to remove one foetus. And maybe then All At Once would not have been born, or Fynona. I would not have wanted to miss either of them.”

Black Beauty
“The moment I realised he was truly handsome was when he had to walk in hand at the Westfalen stallion show in Germany. He was walking in the ring with nine other stallions in his group and I was on the grandstand thinking ‘But he is really, truly handsome’. He is not just a lovely horse, but a real beauty. Now I always say: ‘He is somewhat of a Black Beauty’. Black, beautiful, lovely head, he’s got it all. And now here we are, in Tokyo, with a horse we bred and own. What else do you want?”

Offspring
“My daughter Lara is now riding two offspring of All At Once. It’s a dream come true. We use him frequently to breed with, we know all his best and lesser qualities. And we know his character inside out. The offspring we have, give the rider a great feeling and he produces true sport horses, they have something extra. They are not recreational horses by a long shot, they are very attentive. Yet not a bad bone in their body,” says Willeke proudly about the offspring of All At Once. “His offspring are still young, the oldest are seven or eight now. The first are competing in the Small Tour now. What I hear most is that his children have a lot of balance and give such a nice feeling. They are eager to work for you,” tells Willeke.

Goody Two-Shoes
About the character of All At Once, or Ollie as he is affectionately called on day to day basis, Willeke says the following “He is a goody two-shoes, he always does his best. He is sensitive though. He is sharp, but in the right way. Yessin Rahmouni always says “He is that nice kid in school, always in front at class and paying attention to what is asked of him.’ And as a stallion, you could leave your child with him. He wouldn’t hurt a fly. Biting, kicking or lashing out is something he never does.”

Covering
Even right before covering, All At Once is well-behaved, says Willeke, “You don’t need a stallion chain with him, he just waits patiently until he can mount the phantom.” This year they have chosen to withdraw the stallion from breeding and focus on the sport. The idea behind it is that the hormones are less of a factor. The stallion then also does not have to leave mid-season for covering and he can put all his energy into the training and competition.

Yessin Rahmouni
Willeke tells about the rider, “Yessin has been our instructor for over a decade, he rides multiple horses for us. This has been such a steady partnership for so long, it made sense he would also ride All At Once. Yessin is very honest with his horses and and Ollie (All At Once) is a very good boy, that is why they are such a good match.” About the horse, Willeke adds “The fact that our homebred Ollie, that we still own, have made our dream as a breeder come true, is more than special! Performing at the top stage of dressage! Wow!”

DvdB for KWPN
Photo All At Once: Dirk Caremans