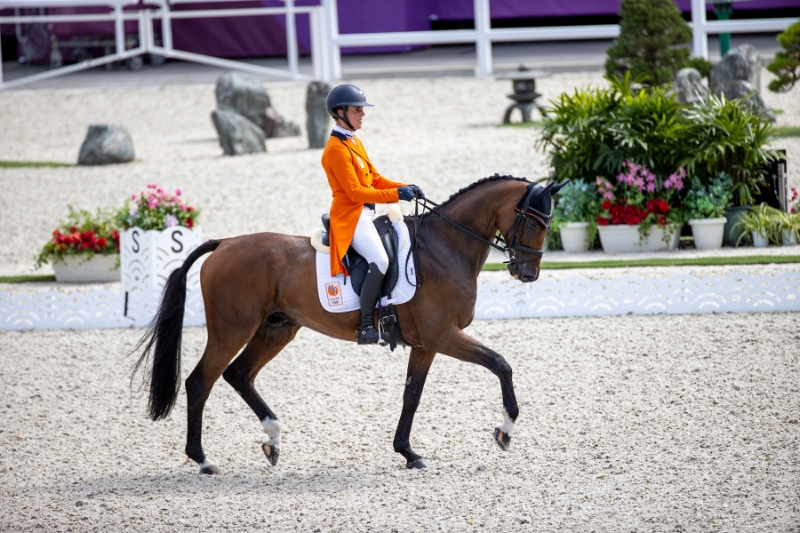 Last saturday, the third and last group eventer riders entered the ring for their dressage test. Merel Blom and The Quizmaster performed a clean test that received 31.30 penalty points.

The Quizmaster (Albaran xx out of Zarah-Maro stb by Casco, bred by R.M. Oechies of Delden) was relaxed and work-willing. One flying change had a small error, but the rest of test went well. Until the last AC-line where a major error occurred, costing them some points. Yet overall, a decent performance that was rewarded with 31.1 penalty points. This brings her to a preliminary 21st position. Janneke Boonzaaijer dropped to the thirtieth place.

More KWPN-horses made their appearance today. The Thai rider Kornawat Samran guided Bonero K (Son de Niro out of Moonlight ster pref prest by Damiro, bred by P. Kluytmans from Tilburg) to 32.50 and the Brazilian Carlos Parro and his Goliath (Chello III VDL out of Octa keur by Belisar, bred by J. de Boer from Nijeberkoop) scored 36.10.

After top performances by Oliver Townend and Alex Hua Tian, there were a few other favorites on the starting list today. Reigning Olympic Champion Michael Jung bested the prior performances, and he is currently in the lead with 21.10 penalty points.

Tonight (tomorrow morning on Japanese time) the cross-country is scheduled. It promises to be an interesting competition with a beautifully designed, yet technical and hilly course.