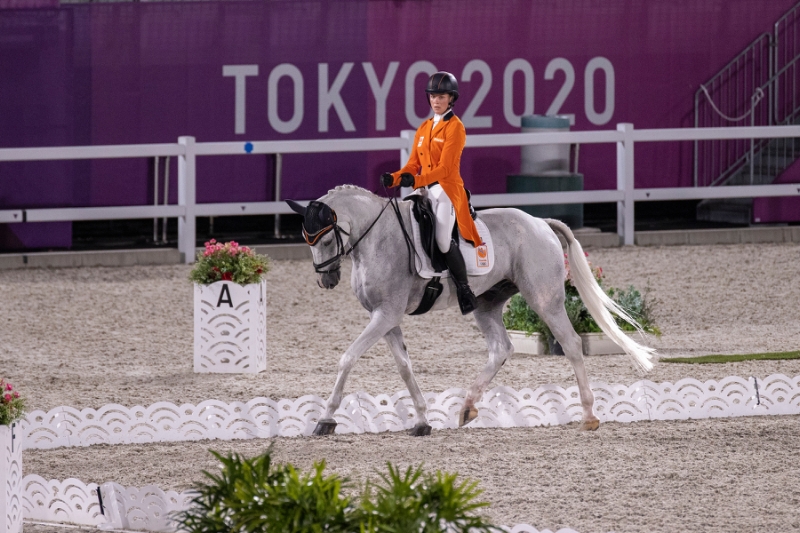 On the first day of eventer dressage, Janneke Boonzaaijer entered the ring with her Champ de Tailleur. They performed a solid test, receiving 33 penalty points. This brings her to a preliminary 21st position.

On Facebook Janneke exclaims proudly: “Wow, how cool was that! I am so proud! We just did a simple, steady test, no mistakes, we did it! My score of -33 means there are quite some good combinations behind us.”

Champ de Tailleur is a fourteen-year-old gelding by Quidam de Revel out of Vera stb-ext by Oberon du Moeulin. He was bred by Arie Hoogendoorn of Haaksbergen and Wim ten Pas of Winterswijk. Janneke had to ride in the evening of the first day. For the eventer sport, dressage has been divided in three pasts. The first group started this morning. The experienced British Oliver Townend and Ballaghmor Class obtained a great score of 23.60. In close pursuit was the in England living Chinese rider Alex Hua Tian, that also realized 23.60. For the first time in history, the Chinese have been able to send an Olympic team.

The Australian Kevin McNab was the traveling reserve, however he got to ride after all with his Don Quidam (Quidam out of Nairoby keur by Amethist, bred by J.M. Schurink in Wijhe). Scoring 21.10, he is currently on the 18th position.

The KWPN-horse Ferreolus Lat (Jaguar Mail out of Veonille II of Royal Dance, bred by A.J.M. van Esch of Eersel) was presented by the Czech Miloslav Prihoda. Their score was 33.80.

The second Dutch rider, Merel Blom, can start tomorrow. She will ride her test at 01.48hrs Dutch time.