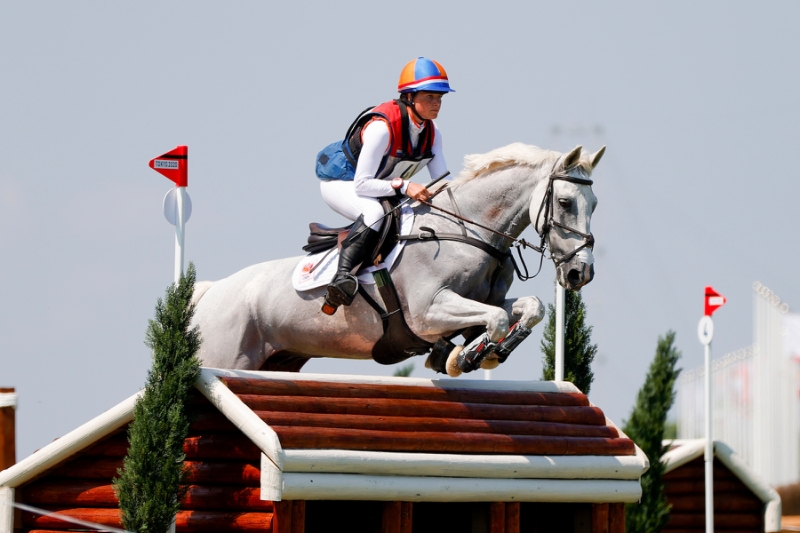 In the cross-country at the Olympic Games in Tokyo, neither Janneke Boonzaaijer nor Merel Blom had any luck. Janneke had to deal with a broken safety-pin, however she still finished the course with time penalties. Somewhat later she found out to be disqualified. Mrel Brom had to leave the cross-country two-thirds in the course. Oliver Townend now leads the interim rankings, ahead of the German Julia Krajewsji. The British Laura Collett is on preliminary bronze. Great Britain leads the battle for the team medals, followed by Australia and France.

The course designer must have held hist breath for a second when immediately the first Thai rider fell in the water at effort 4. The second rider Oliver Townend then performed the textbook example on riding a cross-country. His mighty cantering Ballaghmor Class completed the course in a seemingly effortless manner, clear and 5 seconds within the time limit.

The Chinese Alex Hua Tian was in third position after the dressage phase. However, his horse Don Geniro was spooky and not eager to go forward, incurring 12 time penalties. Julia Krajewski gave a solid performance for the German team. With lots of balance and overview she and her Amande de B’Neville exceeded the time limit by merely one second.

Miloslav Prihoda Jr was the first to enter the arena aboard a KWPN-horse. Ferreolus LAT (Jaguar Mail out of Veonille II by Royal Dance, bred by A.J.M. van Esch from Eersel) had a great round up till effort 13c, a small point he hit so hard that the safety-pin broke off, provoking 11 penalty points. Quite a few time penalties brought the total to 30.60 penalties in the cross-country.

Laura Collett was riding quite assertively with her London 52. This puts the GB team in a great position for a team medal. “We are here for the gold. Oliver had already procured a fantastic result and gave me a pep talk beforehand. It’s nothing more than a shortened 4*. We have a great team. I feel like I am living the dream, it’s incredibly special to be here.”

Kevin MacNab was the second rider for Australia with Don Quidam (Quidam out of Nairoby by Amethist, bred by J. Schurink from Wijhe). A tough blood-made horse that started well and jumped increasingly better and cantered faster and faster during the course. Enduring merely 2.80 time penalties he places his team on a preliminary silver medal.

Sandra Auffarth started off strong with Viamant du Matz, but had a refusal at the second water obstacle 9c. An expensive mistake for the team. Picking up 2,40 time penalties totaled to -22.40, a disappointing result for the Germans.

Janneke Boonzaaijer’s Champ de Tailleur looked fresh at the start, showing a strong canter. At the first water obstacle they gave the viewers a scare, but with a loud yell the combination cleared the obstacle. Unfortunately, she also lightly touched effort 14c, causing the safety pin to pop back. Immediately 11 penalties. A refusal at the coffin and quite a few time penalties the end result was -42.60, visibly displeasing Janneke. Eventually, she gets eliminated for riding the wrong alternative after the refusal at 18.

Directly after her, Merel Blom made her appearance with The Quizmaster (Albaran xx out of Zarah-Maro stb by Casco, bred by R.M. Oechies in Delden). At the drop into the water, the pair lost balane and the experienced rider choose the longer route. The continued their way, the last point of obstacle 14 forms no problem and is cleared in a nice rhythm. After the difficult combination of narrows they are eliminated from the competition as it turns out that Merel forgot the C-element of the water effort on the alternative route.

Tom McEwen and Toledo de Kerser added to the success of the British team by completing the course without any penalties.

The last Thai contestant Krontewat Sanram was unfortunately eliminated after a fall with his Bonero K (Son de Niro out of Moonlight ster pref prest by Damiro, bred by P. Kluijtmans from Tilburg).

The dream of the Japanese team also fell apart. After an impressive cross-country for Kazuma Tomato, that received merely 1.60 time penalties after his -25.90 score in dressage, his fellow countryman Yoshiaki Oiwa could not finish the course today after a fall.

His fall and the damage caused to the obstacle, led to a waiting game for the experienced Australian rider Andrew Hoy. He had to wait under a tent to continue his race. Whether this was a disadvantage in these warm circumstances can be debated, since his well-jumping Vassily de Lassos crossed the finish line full of energy and without any time faults. This kept Australia in second position.

Karim Florent Laghouag was the last French rider to start. After a nearly flawless round of Nicolas Touzaint (0.4) and the 1.60 penalties of Christopher Six, he also cleared the course, securing a preliminary bronze position for the French team.

New-Zealander Tim Price found a great successor for his KWPN-horse Wesko in Vitali. He rode a strong round and thanks to only 1.20 time penalties he climbs up the intermediate rankings to the fourth position.

The second to last rider to start today was the favorite Michael Jung. Surprisingly, he also hit the safety-pin, incurring 11 penalties and dropping him to the tenth position with Chipmunk FRH.

The last combination was the Brazilian Carlos Parro and his Goliath (Chello III VDL out of Octa keur by Belisar, bred by J. de Boer of Nijeberkoop. In their steady round they only picked up time penalties: -22.80.