KWPN damlines on podium in Tokyo 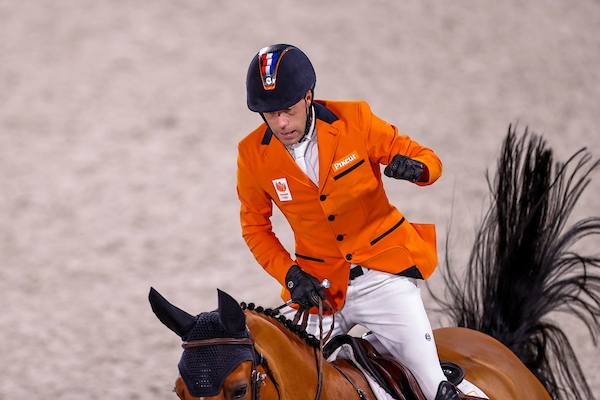 
The golden medal for Explosion W (Chacco-Blue out of Uarina ster sport-spr prest by Baloubet du Rouet, bred by Willy Wijnen from Berlicum) and Ben Maher was strongly hoped for. For years, the pair has ranked among the world top and Explosion W has developed into a dream KWPN-ambassador. Olympic gold is the icing on the cake, after winning medals at the European Championships of Rotterdam and being victorious in the 5* Grands Prix of Windsor, Valkenswaard, Prague, New York, Rome (2x), London, Doha and Madrid.

Repeating his achievement of the Olympic Games of Rio de Janeiro, the Swedish seasoned rider grabbed individual silver with the Kashmir van Schuttershof-son H&M All In. This by the Dutch Bas Huijbregts bred SBS-registered gelding (ds.Andiamo) has a KWPN-granddam, the keur mare Bellafleur (s.Omega). Remarkably, Kashmir van Schuttershof (s.Nabab de Rêve) also sires the horse in fifth place, H&M Indiana, that delivered three clear rounds with Malin Baryard this final. H&M Indiana is also a grandchild of a KWPN-mare. The granddam is the Cavalier-daughter Icerole, a 1.30m jumping studbook mare.

The bronze for Maikel van der Vleuten and Beauville Z has multiple Dutch dimensions. This eleven-year-old at Zangersheide registered gelding comes out of the first crop of Bustique and he was bred by Dutchman Pascal Habets out of the KWPN-mare Wrinton ster PROK (Jumpy des Fontaines x Andiamo).

The influence of the KWPN-recognized stallion Cardento in this individual championship was undeniable. His half-brother VDL Cartello qualified for the final under Darragh Kenny and he impressed as the sire of Cian O’Connor’s top horse Kilkenny (7th with one time penalty). Yesterday his KWPN-registered son Dubai (appointed, out of Ozella keur pref prest by Kastello, bred by Jan and René van Gestel of Hilvarenbeek) and Samuel Parot crossed the finish line with one mistake. The KWPN-recognized Chacco-Blue also left his mark. Not only via the golden boy Explosion W, but also as the sire of the in sixth position placed Chanyon of Daisuke Fukushima. In addition to Bustique, the following KWPN-stallions produced horses in this individual final: Verdi, Veron, Canturano, Arthos R, Mr.Blue and Eldorado van de Zeshoek.