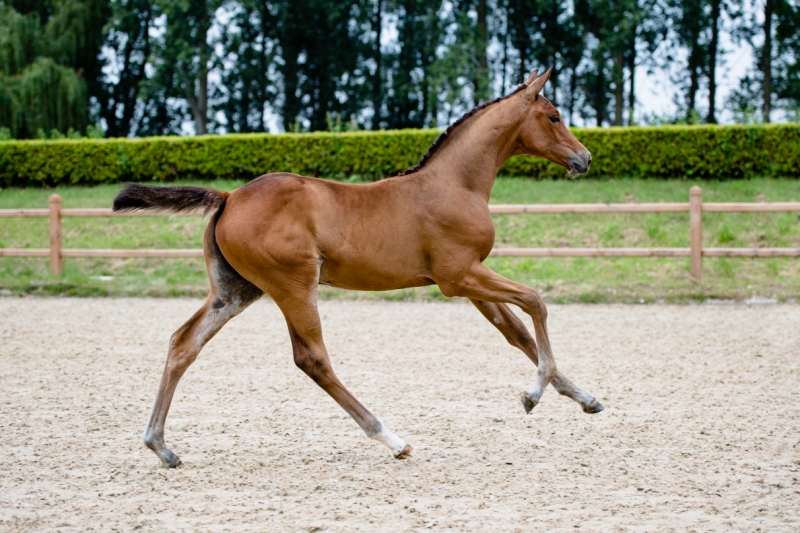 The very first collection of the Exclusive KWPN Jumping Foal Auction is rock solid! The majority of the auction foals can be directly linked to the Olympic Games. Add very impressive damlines to this and foals that also know how to impress themselves. Bidding has started today, the auction closes on Wednesday August 11th from 8pm.

With the blood of Diamant de Semilly, Kannan, Quidam de Revel and Landgraf I, Ritanula-N has an impressive pedigree. Her young dam is also a half sister to the 1.60m horse Chin Quidam VDL (s.Chin Chin) of the Olympian Darragh Kenny. Granddam Thianula N performed at 1.35m level herself and also produced several international 1.40/1.45m horses. This damline then goes back to Hinula, a full sister of the German approved stallions Lancer I-III. She produced, among others, the 1.50m-classified Unlimited-N (by Voltaire) and she stands at the basis of many international showjumpers.

Living legend Verdi TN
With participation in two Olympic Games, Olympic team silver, European team gold and team gold at the World Equestrian Games, he is one of the world's most successful sporthorses of his generation: Verdi TN. This daughter has earned his looks and also carries the valuable blood of Spartacus and Carthago Z. Reverie also represents a strong dam line. Her dam Handsome TN is a half-sister of the internationally 1.45m-classified horses Crocodile Dundee (s.Calvaro Z) and the Westphalian approved Diathago (s.Diamant de Semilly) of Marcus Ehning.

1.60m mother
The Grand Prix mare AJ Produkter Cardelia (by Cardento) can look back on a successful sport career and was placed in 1.50/1.55m classes many times. At the CSIO4* in Poznan she even qualified at 1.60m level. The Olympic stallion Cardento himself won several team medals. Also very interesting is that before her sport career, Cardelia already produced the international 1.45m show jumper Easy Boy (s.Quite Easy), who is also approved in Sweden. Cardelia is also the half-sister of the 1.60m horse Anatolica (by Robin I Z). Radelia van de Keihill's sire El Barone 111 Z already jumped his first Grand Prix at the age of nine with Malin Baryard-Johnsson and seems to have a great future ahead for both sport and breeding.

Bred out of half-sister Grand Prix winner
Under the Olympic champion Ben Maher and under Mario Deslauriers, Zandor Z son Urico won many Grand Prixs and took part in the WEG in Kentucky. Rascal Blue SW is bred out of a half-sister of this top jumping horse and this Excellenta C has already produced the internationally 1.50m-classified Hot Shot van de Hoendrikshoeve (by Winningmood). Excellenta C is also a full sister of the internationally 1.50m jumper Domar. Subsequently, this successful dam line goes back to the mare Diana, who is at the basis of Grand Prix horses such as Casantos (s.Carthino Z), Oranca (s.Fedor), Wish (s.Numero Uno) and Cas 2 (s. indoctro). Combined with this part of the Kattebel damline is here the rapidly emerging progenitor Chacoon Blue, who jumps at 1.50m level and is establishing himself as sire of many top talents.

Special
Are you looking for something special, something for (big) sport and/or breeding? Then this collection will not disappoint you. The collection can be viewed on the KWPN auction platform. Bidding will close on Wednesday August 11th.