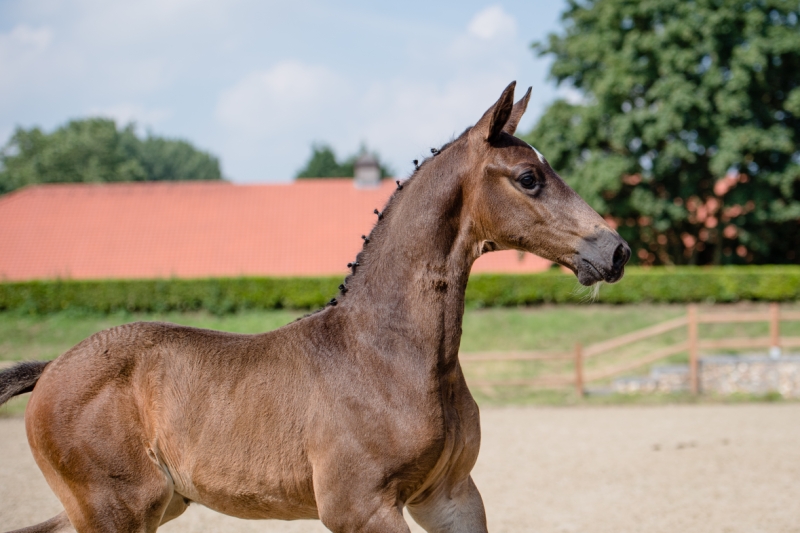 Tonight is D-Day, the very first collection of Exclusive KWPN Jumping Foal Auction will go under the digital hammer from 8 p.m. There already seems to be plenty of international interest with bidders from America, Sweden, Belgium, Bulgaria, Germany, France, United Kingdom, Lithuania and Switzerland.

Legendary Casall
The Olympic Casall is also represented, not on the father’s side this time, but he can be found back in the direct damline of Ragnar GHP. Ragnar is a son of the German progenitor Conthargos, who leaves his mark as a supplier of international show jumpers. Here he is combined with the elite mare Blenchi-A, whose oldest offspring are competing in sport. Via the international sport and breeding stallion Emilion, this damline goes back to Lord daughter Dessie IV, who has proven herself as dam of the 1.50m show jumper Pamela (by Animo). The line then goes back to the mare Maltia, who can be found in the second generation behind the legendary Grand Prix stallion Casall, one of the headlights of this proven Holsteiner lineage 890.

Successful sporthorses
With offspring such as Darry Lou, Tobago Z, Victoria, Warrior and Expert, the Grand Prix stallion Tangelo van de Zuuthoeve proves to be a first-class sire. He is here coupled to the young mare Nomykaat (by Chacoon Blue), which resulted in the colt Rangelokaat. Granddam Unikaat jumped at 1.30m level herself and has already produced five international showjumpers, including the 1.45m-classified Inekaat (by I'm Special de Muze) ridden by Coen Kerbert, who achieved a top score of 87.5 points in the IBOP saddle test as a four-year-old. Great-granddam Piekaat has proven herself in sport at 1.35m level and produced three 1.40m show jumpers, including the internationally classified Glenwood (s.Vingino).

As dam's sire the 1.50m-classified Chacoon Blue, who is developing into a striking breeding stallion, adds his genes to this successful sport line.

Special
Are you looking for something special, something for (big) sport and/or breeding? Then this collection will not disappoint you. The collection can be viewed on the KWPN auction platform. Bidding will close on Wednesday August 11th.