My Precious over 90 points in semi-final Pavo Cup 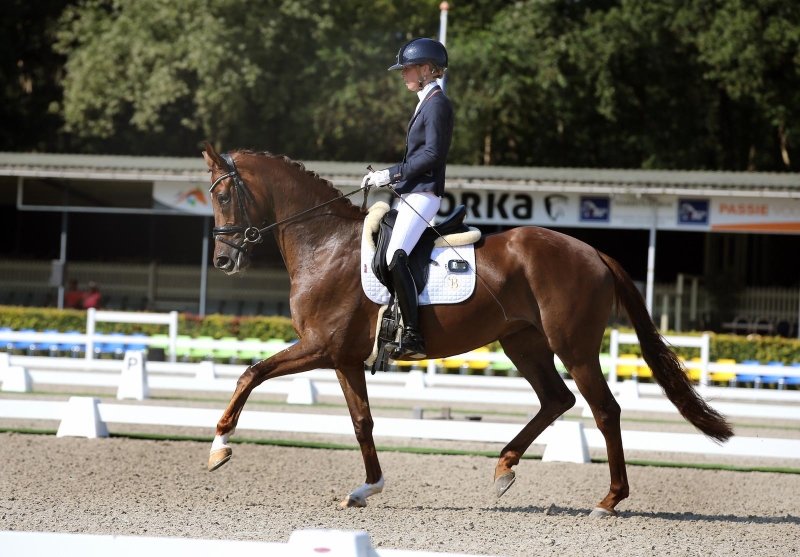 Following the six-year-olds, the semi-final of the Pavo Cup for four-year-olds was also headed by a mare. Ferguson-daughter My Precious moved to a total of 90.2 under Kirsten Brouwer.

Brecht D’Hoore and Janine van Twist took a seat behind the jury table for this semi-final. “This was a big group, and the average quality was very high,” commented Brecht. “We have seen many quality horses that were easy to ride despite the staging around the arena. Harmony was very important to us today. These are four-year-old horses, so they are allowed to spook at times, but we want to see horses that are willing to work. In addition, we watched closely if the horses are ridden nicely towards the hand, giving them the chance to use their body correctly.”

My Precious (Ferguson out of Cindarella Platinum elite EPTM-dres PROK by Vivaldi, bred by Titan Wilaras of Riel) scored multiple 9s and even a 9.5 for the walk. “This is a high-legged mare with a great walk. She could gain some power in the trot extensions, but that’s all right for a four-year-old. In the side pass she showed lots of balance and ease. A horse with abundant natural talent.”

Habanna-daughter Mayflower (out of Galanta ster IBOP-dres sport-dres PROK by Alexandro P, bred by Dressage Stables Rutten in Ittervoort) received 87.8 points with Lisanne der Nederlanden, placing second in the semi-final. “This is a show horse with lots of posture. She has a hindleg that is remarkably well-placed under the body. She also demonstrated a great walk. In the canter she remained uphill. Throughout the test she could stay slightly softer in the connection.”

The KWPN-approved Mister Maserati (GLOCK’s Toto Jr. out of Fille de Reine B elite sport-dres IBOP-dres PROK by Jazz, bred by comb. Bleeker of Nijverdal) ranked third with Diederik van Silfhout. The stallion was awarded 87.2 points. “This stallion has a lot of suspension in trot. Today he was rather tense at times because of the surroundings, which cost him higher points. He could gain more strength in the middle part of his body, but it is a horse with great ease and elasticity that moves uphill effortlessly.”

Ridden by Febe van Zwambagt, the In Style-son My 7th Sunday (out of G-Daula ster by Cadans M, bred by Joop van Uytert and Renate van Uytert-van Vliet of Heerewaarden) obtained 87.0. “We found especially the canter and walk remarkable. He has lots of body use and showed a lovely posture in canter, in which he collected easily. The trot was slightly fast-paced and could develop more strength, but he demonstrated great extensions.”

The approved McLaren (Morricone out of Samantha by Sir Donnerhall, bred by U. Toenjes of Ganderkesee) and DInja van Liere received 86.2 points. “This stallion has a striking front and moves with an uphill tendency. He could have shown more flexion in the hind leg today. He was constantly presented with length in the neck, always remaining nicely on the vertical. This horse was remarkably steady in that aspect.”

The twenty top placed four-year-old horses have qualified for the Pavo Cup final this Sunday, that starts at 08.45hrs. Later that day, the best placed five- and six-year-old horses make their appearance. The final takes place at the National Equestrian Centre in Ermelo and the entry is free. If you’d like to come watch, you must order free tickets in advance. In addition, you must bring proof of identification and a corona entry pass to Ermelo. More information about the program and entry to the KWPN Championships, can be found here.