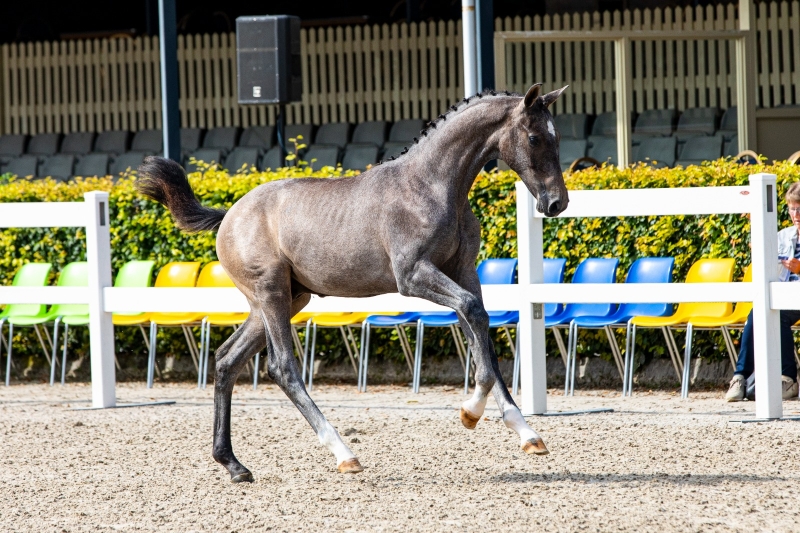 Cor Loeffen, Marcel Beukers and Stan Creemers judged the jumper foals at the National Foal Championships. In a thrilling final, with high quality and minimal differences, Racoon W (Cantona TN out of Gunanita elite pref IBOP-spr PROK by Corland) was crowned champion. “This is a big, long-lined foal,” explains Cor Loefen. “Especially the athletic body and the balance in his canter are strong suits of this foal.” This foal will be auctioned September 1st at the Dutch Top Foals Auction (Veulenveiling Midden-Nederland) in Lunteren.

The second place was also claimed by a colt, Rey (Jumper Verdi out of Beau-Odette elite sport-spr PROK by Cartano) of breeders H.G. and M.H. Spronk of Kampen. “This also a very athletic foal. This morning he was slightly tense, which affected the elasticity in the canter. In the championships round this was notably better.” Rey will be auctioned in the KWPN Online Foal Auction 3, that starts coming Monday and ends August 23.

The best filly of the day placed third today. This honour went to Zirocco Blue VDL-daughter Rubycara van Seldsum VDL (out of Lynncara SMH ster D-OC by Cornet Obolensky) of breeders Esther Hovenga of Jelsum, R.P. de Melker of Grou and VDL Stud in Bears. “This a well-developed foal. Her hind leg use and elasticity in the canter were outstanding.”