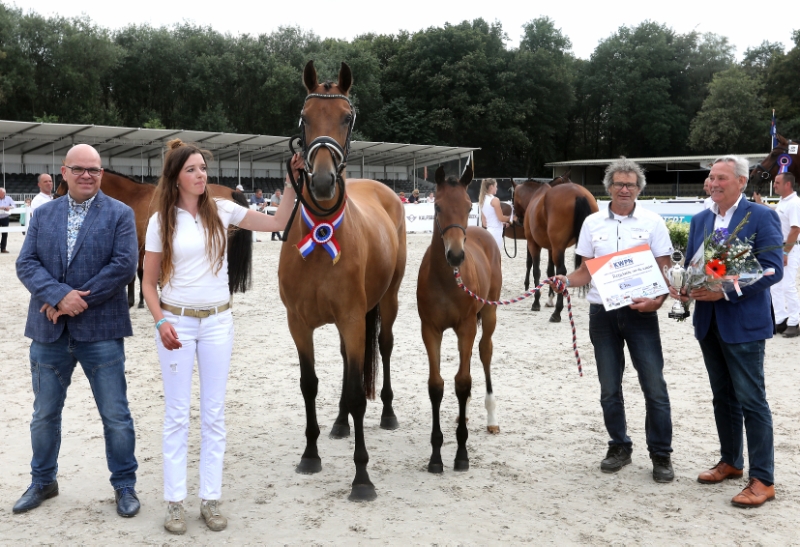 Five years ago, the stallion Le Formidable was crowned foal champion. Today his daughter Rosatrichta van de Westen followed in his footsteps an won the Virbac Foal Trophy. The foal of breeder Cees Kikkert was elected the best in a hotly contested final.

Rosatrichta van de Westen (Le Formidable out of Itrichta van de Westen elite IBOP-dres PROK by Apache) caught the eyes with her lovely model. “The most remarkable quality of this foal is that she moves very naturally, using her entire body,” exclaims an enthusiastic Johan Hamminga, that inspected the dressage foals this NFC together with Arie Hamoen and Pedro Trommelen. “She is high-legged, alluring and has a solid conformation and a beautiful head. In movement, she demonstrates lots of technique.” Cees van Kikkert bred this foal out of the renowned Zinni van Wittenstein-lineage, her dam is a half-sister of the KWPN-approved stallion Dorado.

The vice-championship title also went to a filly: Rylena (Kyton out of My Lena ZL ster D-OC by Blue Hors Zack) of breeder Rom Vermunt of Geesteren. Noteworthy is that the full brother of this foal, Remy Martin, placed third of his group at the NFC this morning. Dam My Lena ZL has qualified for the Pavo Cup final for four-year-old horses, that takes place in Ermelo this Sunday. “This is an alluring foal with lots of presence, she moves with remarkable elasticity in her body.”

The best cot is another offspring of Le Formidable. Ready to Rumble (out of Eos-Utopia elite IBOP-dres PROK by Ampère, bred by Rik van Gils of Eindhout) of Saskia Poel in Heusden and D.H.J.S. Knoops of Wanssum was third in the championships. “This is a well-developed foal that moves uphill and very light-footed. He has a superb canter.”