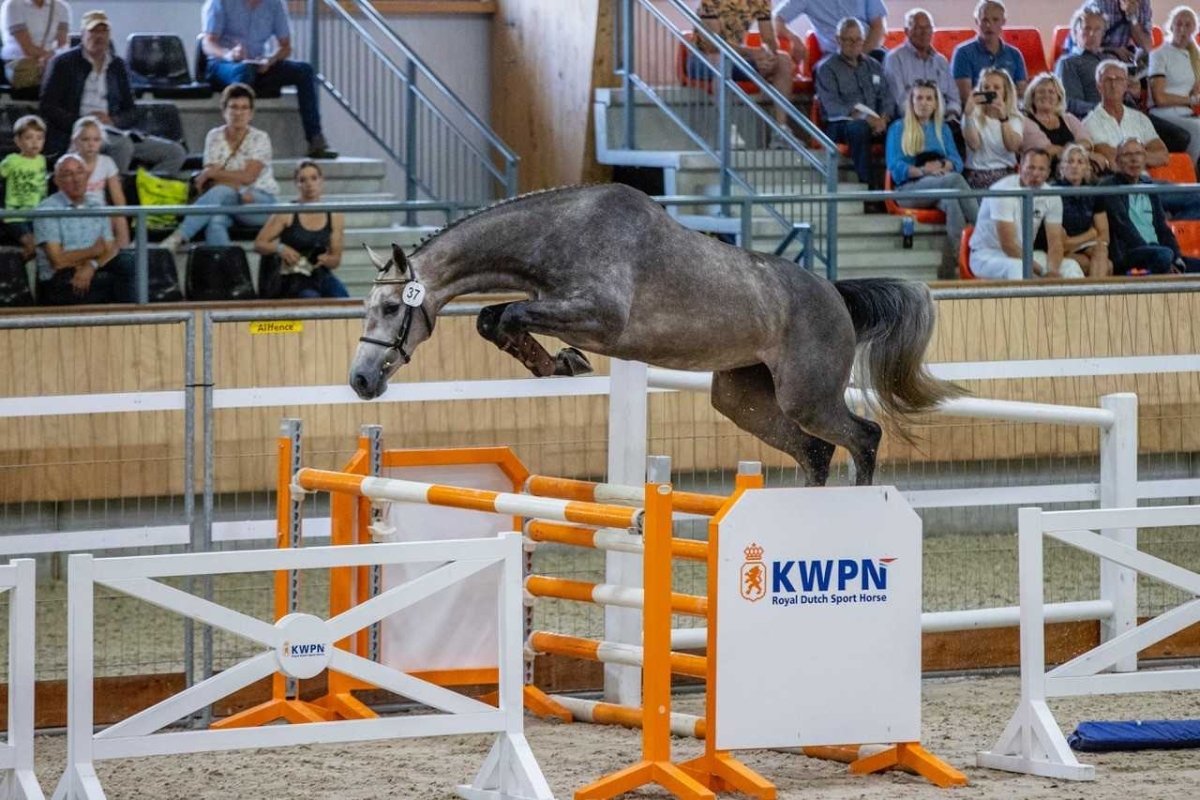 Seven jumper mares returned for the final of the National Mare Championships. The athletic Asca Z-daughter Nirmosa MB was crowned as champion.

“We have invited seven mares for the final, all of which are appealing, have blood, jump with good reflexes, are careful and possess abundant athletic ability,” commented Henk Dirksen after inspecting all the mares together with Henk van den Broek and Bart Henstra.

The new National Mare Champion is the charming Nirmosa MB (Asca Z out of Dumosa ster PROK by Vittorio) of breeders Henk Mulder and Trieneke Brink of Gasselte. “This is a well-developed, youthful mare with blood and appeal. She has a light-footed canter and jumped with great reflexes,” explained Henk Dirksen. The champion mare comes out of the half-sister of Grand Prix stallion Cosun (s.Up to Date) and thereby represents a strong sport lineage. In second place was another genetically interesting mare: Nirmette van ‘t Studutch (Cornet Obolensky out of Jakarmette-E PROK by Nabab de Rêve) of breeder Sjaak van der Lei, that owns her together with his parents Karst and Hilda van der Lei. This mare was shining at the studbook inspections where she scored 85/90 and convinced the jury once again in Ermelo. “A high-blooded, long-lined mare that always finished the jump very well and possesses abundant athletic ability.” The top three was completed by the third grey, the Emir R-daughter Nikky Vera (out of Vera sport-spr by Goodtimes) of breeder VOF Platenkamp & Evenhuis Services of De Kiel. “Again, a high-blooded mare that has a very youthful appearance and a light-footed canter. On the jump she shows lots of athletic ability.”

The fourth position was obtained by the appealing For Pleasure-daughter Nikita W (out of Vanish elite EPTM-spr PROK by Stakkato, bred by Benny Wezenberg of IJsselmuiden of VDL Stud. She jumped with lots of scope. Fifth place was for the mare with the powerful canter Nanolivia VDL (Dakar VDL out of Anolivia VDL keur IBOP-spr pref by Indorado) of breeder VDL Stud, followed by the well-modelled Neealba VDL (Cohinoor VDL out of Ealba VDL ster pref by Zavall VDL) of breeder VDL Stud and on the seventh position we find the impressive jumper Netflix Original STR (Grandorado TN out of Dein-Liebling-STR PROK by Van Gogh, bred by T.A.M. Streppel of Wilp) of Team Nijhof.