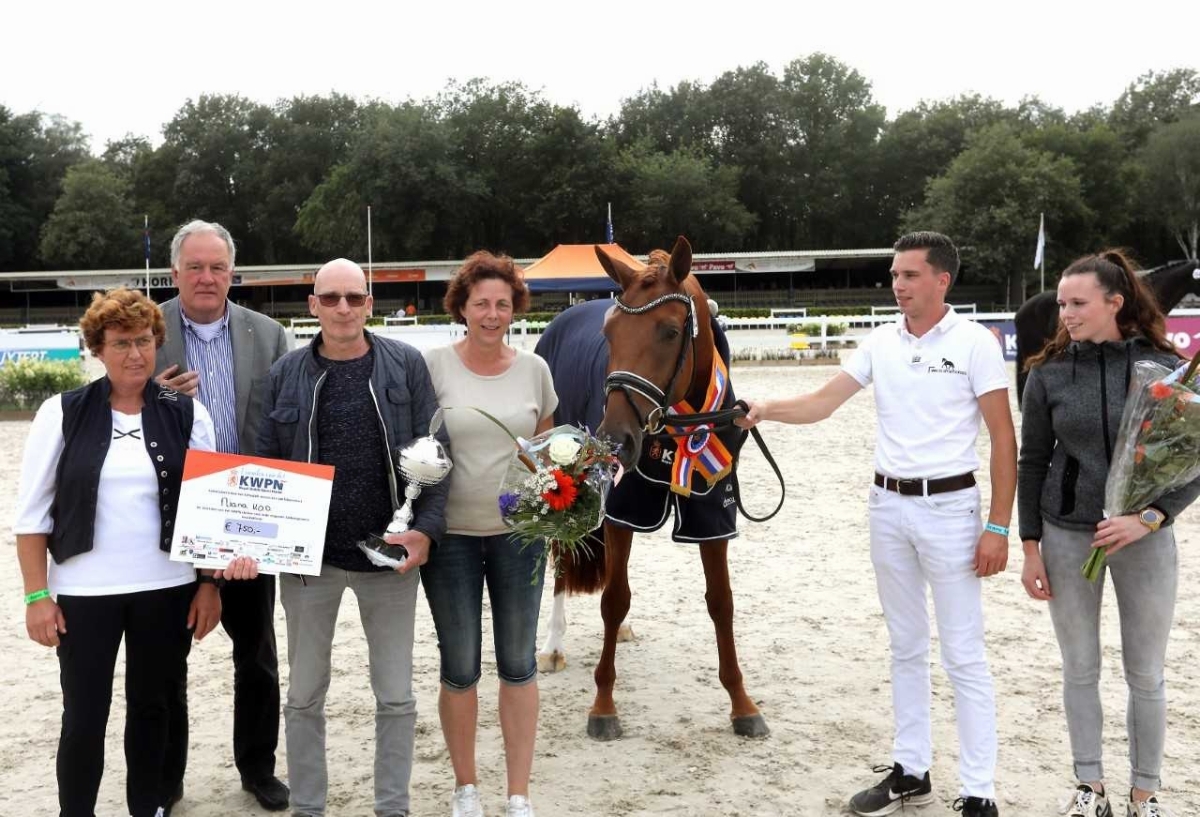 “We had a large group of dressage mares today at the National championships and the quality was of a high level. The fact that we invited 14 mares to the final signals that too,” said Marian Dorresteijn. Together with Bart Bax and Toine Hoefs she inspected 50 mares.

After one more presentation of the top three mares in hand, the jury and the enthusiastic audience turned out to be on the same page. This meant that the champion of the Central Inspections of Brabant, Niana V.O.D. (Desperado out of Zoriana elite IBOP-dres pref prest PROK by Jazz) of breeder Ad van Os was honoured as the National Mare Champion. Each and every time she entered the ring, this charming full sister of the KWPN-approved stallion Mowgli V.O.D. moved with impression and technique. “This is a very youthful and appealing mare that collects and extends with great ease. She stands out in her self-carriage and engaged hind leg. A champion in every aspect!” exclaimed Marian Dorresteijn. The second position in this championship powered by Kalfsbeek was claimed by Nouvelle Feniz Texel (Glock’s Toto Jr out of Feniz Texel elite sport-dres PROK by Negro). Three years ago, she was the undisputed top seller at Foal Auction Prinsjesdag. “This Toto Jr-daughter has a great model and lots of presence. She impresses with her good trot in hand and cantered for 90 points at the studbook inspections. She was also convincing in the walk.”
Nouvelle Feniz Texel is closely related to the number three of this final, Nashville DS (Painted Black out of Keyveniz Texel stb-ext pref D-OC by Negro) of breeders D. Staller and D. Broekema. “This is a beautiful, modern mare that moves light-footedly.”

The alluring Governor-daughter Nuranja (out of Zoranja elite IBOP-dres pref D-OC by Sir Sinclair) of family Andeweg followed in fourth place in this strong final, ahead of the genetic gem and powerhouse Newmanda van ‘t Studutch (Glock’s Toto Jr out of Roumanda elite sport-spr PROK by Rubiquil) of breeders Sjaak van der Lei and Jenny Toes.

Read all about the National Mare Championships in the next issue of the KWPN Magazine.