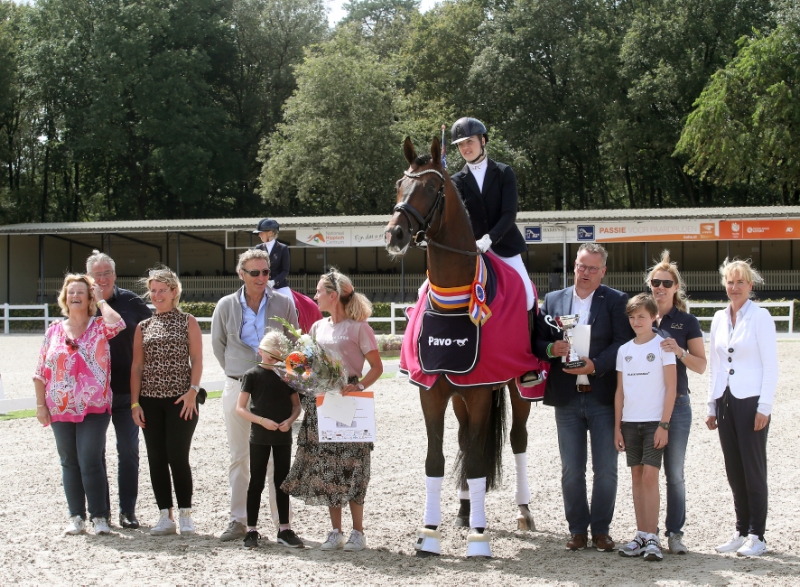 The KWPN-approved stallion Las Vegas was the tipped favorite for the title after the semi-final for five-year-olds on Thursday. He completely lived up to those expectations in the final today. Ridden by Franka Loos he received tens for his trot, canter and by the guest rider.

“The canter is phenomenal,” praises Mariëtte Sanders Las Vegas (Ferdaux out of Dalia Delin ster PROK, bred by J. Deenen of Heijen). “We award him a 10 for the trot and a 10 for the canter. The canter is actually even better than the trot, but we can’t give an 11.” Guest rider Philipp Hess also asked if he was allowed to grant this unparalleled talented stallion an 11. “What a superb feeling to ride this stallion. You can extend, he collects easy, responds quick to the aids and is overall a very comfortable ride.”

Another 10 for Lightning Star RR

Not only Las Vegas received the ultimate 10 from the guest rider. Philipp also rewarded Lightning Star RR (Ferguson out of Daily Enjoy elite pref IBOP-dres sport-dres PROK by De Niro, bred by Titan Wilaras of Riel), presented by Kirsten Brouwer, with the top mark. “This mare is always forward”, explains Philipp’s father Christoph Hess during his son’s riding. “I love this type of horse; this is a characteristic you need for the highest level.”

The best gelding completed the podium. Lord Platinum (Ferguson out of How Pretty Platinum ster by Bretton Woods, bred by Titan Wilaras of Riel) was placed third in both the semi-final and today’s conclusion. The gelding was ridden by Curo Benitez Sanchez. Following a score of 88,2 points in the first part of the final, he received a 9.5 from the guest rider.

Dinja van Liere presented the horses that obtained the fourth and fifth position this final. The KWPN-approved Lowlands (Millenium out of La Donna S by Donnerball, bred by B. Schrapper of Groenheim) received no less than 89,4 points this final. This placed him ahead of his stable mate Leonidas (Trafalgar out of Gaishia elite sport-dres PROK by Alexandro P, bred by R.G. Nijenhuis of Wilp) that scored 87,2 points.