Kadiene thanks to 10 from guest rider invincible 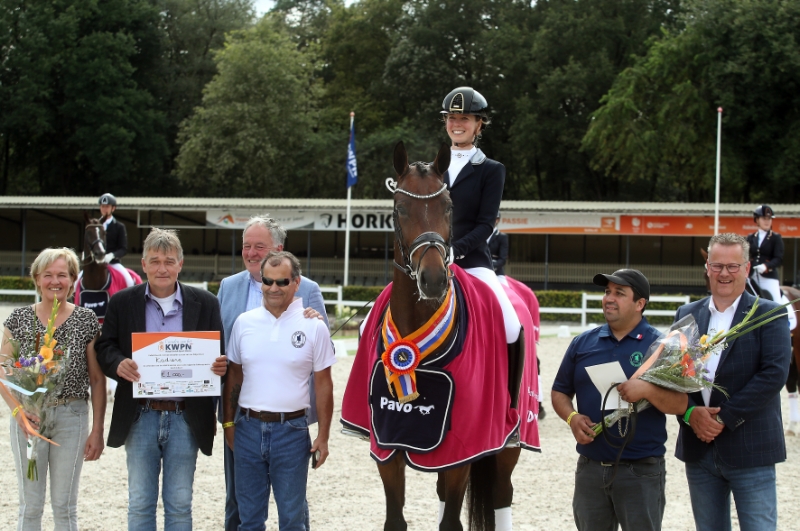 She won the semi-final and the first part of the final. Receiving a 10 from guest rider Philipp Hess, the Zhivago-daughter Kadiene secured the title. Presented by Svenja Grimm, the mare won the Pavo Cup for six-year-old horses.

Kadiene (out of Glamour Girl ster PROK by Belissimo M, bred by De Radstake B.V. in Varsseveld) grabbed the lead in the semi-final where she scored 88,6 points. In the final she bested her own result and scored 90 points. Philipp Hess was impressed by her; he awarded the mare the ultimate 10. “It is an incredible horse, and she gives a fantastic feeling,” he exclaims enthusiastically. “She is very easy to work with and the flying changes are fantastic.”

The KWPN-approved stallion Kyton (out of Wilbria keur pref IBOP-dres by Ferro, bred by W.J.J. Goesten of Berkel Enschot), presented by Bart Veeze, was the fourth offspring of the stallion Ferguson that made it to the second part of the Pavo Cup final today. This stallion also formed a beautiful combination with Philipp and received a 10 from him. Kyton was in second place after the first part of the final and maintained that position, making him the best-scoring stallion.

Marieke van der Putten showed Kuvasz RS2 (Glamourdale out of Dyor de Hus elite pref IBOP-dres PROK by De Niro, bred by Havikerwaard Stud in De Steeg) in the Pavo Cup fnal. He received 85,4 points in the first part of the final and thereby obtained a top three placement. Philipp rewarded the appealing stallion with a 9,5.

The stallions King van het Haarbosch (Spielberg out of Gina elite IBOP-dres PROK by Florencio, bred by L. van Aaken of Wintelre) under Jeanine Nieuwenhuis and Hexagon’s Kaygo (Capri Sonne JR out of Fila Manda elite sport-dres D-OC by Westpoint, bred by Stal Hexagon in Schore) with Thamar Zweistra wrapped up the top five. Everdale-son Kenndale (out of Amerette elite EPTM-dres D-OC by Special D, bred by W.G.M. van Driel of Loosbroek) was the best gelding this final. His rider Nora van Houten directed him to the seventh position.