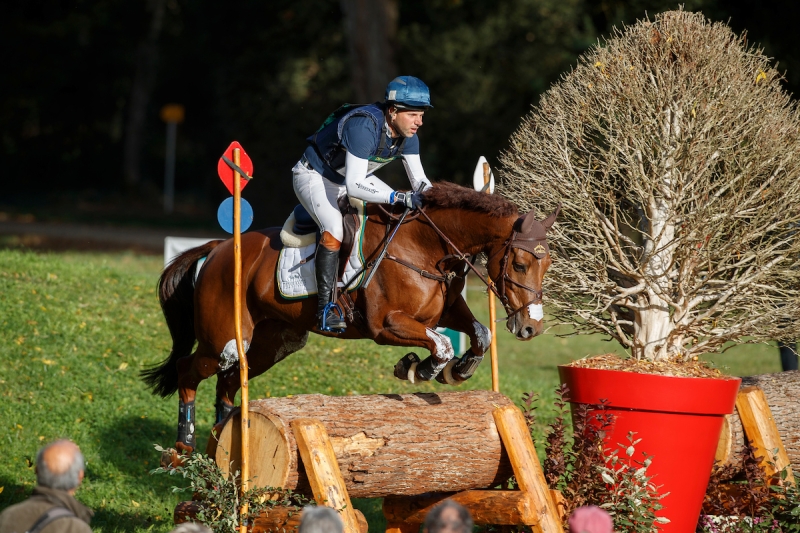 Representing Brazil, Carlos Parro participated in the Olympic Games of Tokyo with the KWPN-horse Goliath (Belisar out of Octa keur by Chello III VDL). That their breeding product would make it this far, is something his breeders Grietje and Jannes de Boer had never expected.

Goliath is born in the stabes of the De Boer family, but he did not stay there for long. The family breeds foals as a hobby. “We like to keep our stables quiet,” says Grietje. Since the stable is home to primarily mares, they prefer not to have any stallions around. For that reason, Goliath was sold as a young foal.

Through different hands Goliath ended up with Carlos Parro. The family De Boer keeps in touch with the rider tells Grietje. When the horse had just arrived at Carlos, there was contact by telephone between the family and the Brazilian rider. When the daughter of Grietje found out that Goliath was on the participation list of the Olympic Games in Tokyo, she said: “Mum, he is back again! She then posted it on Facebook and we received a lot of reactions,” tells Grietje. So, what are you talking about with the rider of your Olympic homebred horse? “About horses of course, that’s all” laughs Grietje. “The last time we spoke, Carlos told us that he was very pleased with Goliath and that he is doing the work very well, that’s wonderful to hear” comments the breeder proudly.

That Goliath would reach the Olympic Games is something Grietje had never expected: “No, of course I had never expected this! You may dream of it. It is incredible that a horse you bred is performing at such a world stage, but it never came to mind.” Concerning Goliath’s placement (individually 32nd, team 12th place) Grietje says the following: “It is a young horse, so I had no depiction of a high placement this Olympic Games. In three years, the Olympic Games are organised in Paris. He will be more mature and experienced by then, perhaps resulting in an overall beter ranking.”

Goliath comes out of a Belisar dam. “Chello III VDL raises the expectations for showjumping or eventing, but Belisar is not jumper horse. Chello III was my choice at the time. We already bred a foal with this mare (Fiorenzo, Belisar out of Octa keur by Vermont) and we wanted to breed another offspring out of her. So which stallion do you use? We chose Chello III. And it turned out quite alright!”

The De Boer family breeds both dressage and jumper horses. At the moment they have a colt by Kjento (Ronaldo B, out of Lurella B preliminary keur D-OC by Grand Galaxy Win). They also have a Silverstone-mare (Carella B, out of Marella keur prestatie sport-spr by Haarlem) and a Corland-mare (Ocarella B, out of Carella elite IBOP-spr PROK by Corland) in their stables. Both jumper and dressage genes in this multidisciplinary breeding. And not without success. Goliath is not the only successful eventer horse that was born at the stables of the De Boer family. The horse Zlatan B (Haarlem out of Marella keur prestatie sport-spr by Indorado) competed in the 2019 Military Boekelo-Enschede with the Swedish rider Viktoria Carlerback. “Breedin an eventing horse never came to mind. We have never expected this. The fact that breeding is our hobby makes it even more fun to experience something like this.” says Grietje proudly.

More information about the KWPN-horses at the Olympic Games can be found on this overview page.
Photo Goliath: Dirk Caremans, Hippofoto.be