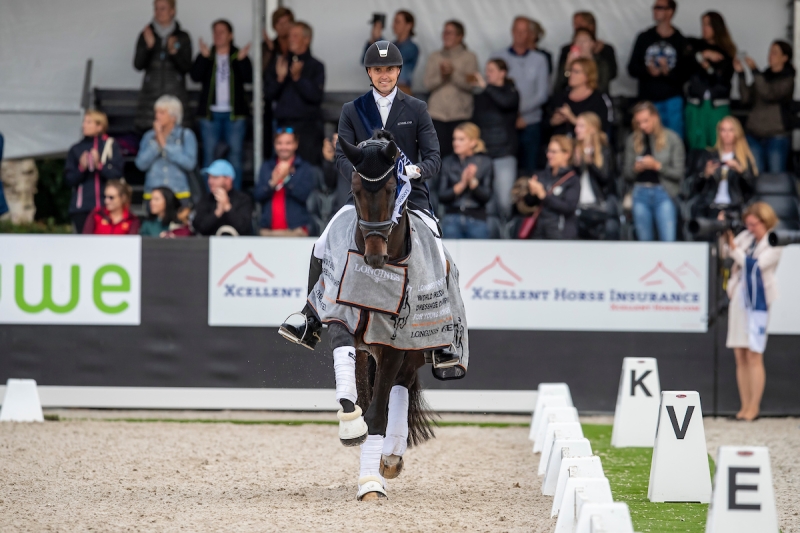 In a week the World Breeding Dressage Championships for Young Horses commences. After the event was forcibly canceled due to the corona crisis last year, the young dressage talents are back to compete in Verden, Germany this year.

On Wednesday the event kicks off with the qualification for six-year-old horses, for this age category the small final is planned on Thursday and the final on Saturday afternoon. The five-year-old horses make their first appearance on Thursday, their small final is organised on Friday and the medals can be won on Sunday. Friday, Saturday and Sunday the seven-year-olds are on the program.

In the five-year-old category, the Netherlands is represented by six combinations, among them the top three of the Pavo Cup final of last weekend: Las Vegas (s.Ferdaux), Lightning Star RR (s.Ferguson) and Lord Platinum (s.Ferguson). KWPN-horses are not only active on behalf of the Netherlands, Moldavia, Norway and Ukraine also included a five-year-old KWPN-horse in their selection for this championship.

The seven-year-olds class guarantees a thrilling battle. Unlike the other age categories, these horses have competed in the world breeding championships before the corona crisis. Out of the top five of 2019, four horses have returned. One of the tipped favorites for the title is the golden medalist of two years ago: Apache-offspring Jovian. He is part of the Dutch delegation, as is the KWPN-approved stallions Jameson RS2 (s.Blue Hors Zack), Jersey (s.Vivaldi) and Just Wimphof (s.De Niro). Jongleur STH (s.Expression) and previous Paco Cup-champion Johnny Depp also defend the Dutch colours in Verden. Canada and France also selected seven-year-old KWPN-horses for the World Championships.

Have a look at the list of participants and the full program.