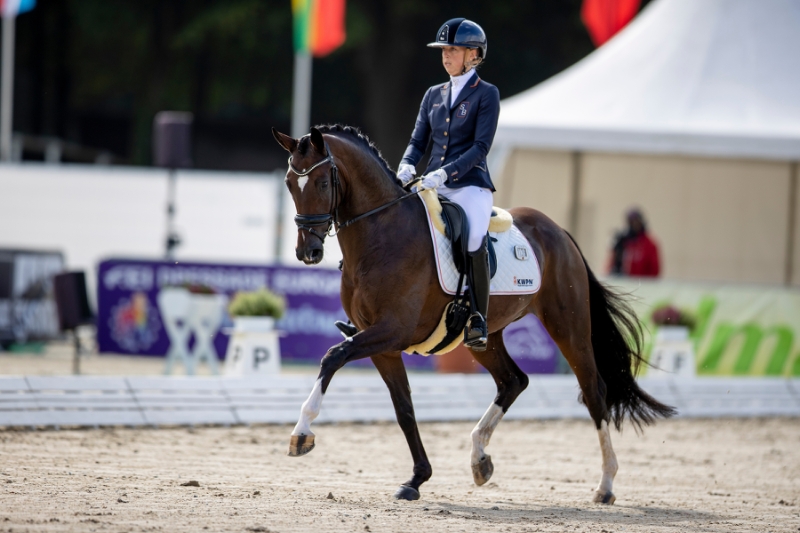 At the World Championships in verden, Lightning Star has lit the fire by coming in second in the qualification for five-year-olds. With lots of expression the Ferguson-daughter danced to a score of 95.2.

The day started off well for the Dutch squad when Pavo Cup winner Las Vegas performed an incredible test with Franka Loos as the first start of the day. The approved son of Ferdaux (out of Dalia Delin preliminary keur PROK by Wynton, bred by J. Deenen) once again showed his beautiful front, nice contact, uphill and he trotted with lots of rhythm and suspension to a 9.2. In the walk the stallion also showed lots of space and elasticity, which was rewarded with an 8.8 and his grand, incredibly jumped canter even received a 9.5. An 8.9 for submission and 9.5 for overall impression brought the total to 91.80, which seemed difficult to beat. And yet, six other horses bested it in this qualification filled with enormous quality. It promises a thrilling final!

One of those horses was Kirsten Brouwer’s Lightning Star, a daughter of Ferguson out of Daily Enjoy elite pref IBOP-dres sport-dres PROK by De Niro, the first of the two breeding products of Titan Wilaras in this qualification. The number two of the Pavo Cup showed lots of elasticity and expression, everything seems to come easy to her. She is not the biggest in size herself, but her movements are huge, yielding both in trot and walk a 9.5. The canter could have shown a slightly better jump, but the jury awarded it with a 9.2. Followed by a 9.7 for the submission and a 9.7 for general impression, the sympathetic bay set a result of 9.52. Enough for the second position behind Eva Möller and Danciero 8 (9.66) and ahead of the same rider on Global Player OLD, a son of Grand Galaxy Win T (9.50).

Dinja van Liere held two trumps in this age category. Aboard Labarron (For Romance out of Tuschinski, bred by L.M. Bergers Ketterink) she performed a solid test that was rewarded with 8.62. Labarron is a very elegant gelding with a good trot and a spacious walk, both received an 8.5. The canter is light-footed and big and was rewarded with an 8.8. A lovely simple change and nice contra’s secured two more 8.8s on the scoreboard. The score put them on the twelfth place, thereby procuring the last direct ticket to the final. Dinja also made an appearance on Leonidas. This well-developed bay is a son of Trafalgar out of Gaishia elite sport-dres PROK by Alexandro P. The horse is bred by Rolf Nijenhuis from Wilp and has a spacious trot and an uphill canter. In the walk he could show more overstep and he sometimes is slightly strong in the contact, bringing down the score to 7.78.

Merely a sixteenth point ahead was Hexagon’s Luxuriouzz, bred by Wendy Plomp. This son of Johnson out of Walida van de Waalsehoeve elite IBOP-dres PROK by San Remo) was ridden by the Hungarian rider Benedek Pachl. His enormous uphill model captures everyone’s eyes. The trot is active and with a nice push off the ground and was awarded an 8. The walk is spacious, an 8.5, and for the canter he received a 7.8. The overall image, however, could be more open. He remained tense in the contact which resulted in an open mouth every now and then. This affected the mark for submission, a 7.2. Still, with a 7.8 for general impression the final score of 7.86 placed him on the 23rd rank, out of 42 competitors. The representative of Ukraine, Krack C-daughter Lemirah-Gonda (out of Emirah-Gonda stb-ext by Sir Oldenburg, bred by G.J.W. Verdellen) received 7.60 with Nathalia Leshshiy.

The last horse of the Dutch team, the Ferguson-son Lord Platinum (out of How Pretty Platinum ster by Bretton Woods, bred by Titan Wilaras) was presented by the Spanish rider Fransisco Benitez Sanchez. The remarkably charming stallion showed lots of good bits but was somewhat spooky. The trot was rewarded with an 8.8, but the active walk was brought down to a 6.8 because of the tension. Although he received a 7.5 for the general impression, the final score lingered somewhat surprisingly at 7.47, partly because of a 0.05 point deduction. The reason behind it, is unclear to the reporter. Possibly because the rider took so much time for the simple change it was seen as a mistake? Perhaps more on that later.

Tomorrow the small final is scheduled, in which more KWPN-horses may be added to the already solid score of three in the best twelve out of this top-quality age category.