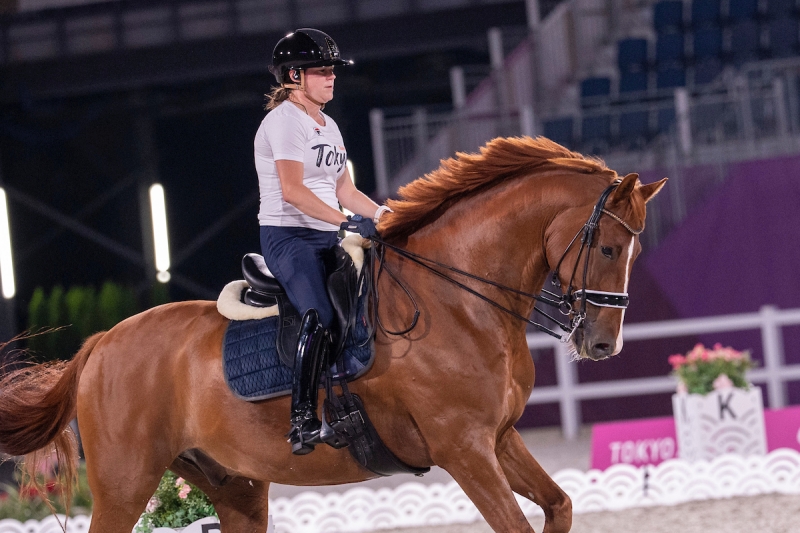 Today, Sanne Voets made her first appearance at the Paralympic Games in Tokyo. She steered her Demantur to 76.585% in the individual test of Grade IV, taking the gold medal and fulfilling her role as favorite!

Aboard the Vivaldi-offspring Demantur RS2 N.O.P. (out of Kaylee keur prest sport-dr by Elcaro, bred A.M. Reuzenaar of Schaijk), Sanne Voets performed a beautiful test in the Grade IV. Demantur is the first KWPN-horse to grab a medal this Paralympic Games. “This is amazing, I had such a nice ride”, says Sanne enthusiastically. “Demantur has a lot of quality, I was afraid I could not do right by him. He is able to do so much, if I ride well, he can do it all. I have filmed a few of my trainings here so that I could show them to Emmelie Scholtens and Seth Boschman. They gave the final tips. Today I kept those in mind and was able to use them in the ring. If I keep sitting quietly and give Demantur the chance to move uphill, he does it. I am so lucky to work with this horse.”

After three gold medals at the World Equestrian Games and the European Championships, the expectations for this combination were sky high. “Everyone is talking about that triple gold and I already put so much pressure on myself to do well. That is something I have to get used to, when I left for Rio I was not cast in that role. First, I am going to enjoy today and watch the Grave V, after which the medal ceremony is scheduled. Tomorrow we have a day of rest and I get to watch my colleagues in the Grade III that undoubtedly will put on beautiful performances. I really am living day to day here. Of course, I am going to try to ride like this again in the team championships, but at the same time I know we work with horses. At least it is nice that the first hurdle is taken and that we succeeded in performing a good test at the right time. I am confidently looking forward to the rest of the week.”

Presented by the Swedish rider Louise Etzner Jakobsson, Goldstrike B.J. (Dreamcatcher out of Pamberley ster prest sport-dres by Jazz, bred by B. Jelgersma) also qualified for the Freestyle to Music on coming Monday. This combination was very close to a podium in Grade IV, ending on place four. Earlier in the day, the individual championships in Grade II took place. In Grade II two more KWPN-horses qualified for the Freestyle. The first is Clarc (Dreamcatcher out of Miss Sinclair elite prest PROK by Lord Sinclair, bred by A.P.M. Pittens of Nistelrode), that placed fifth with Beatrice de Lavalette for the United States. Representing the home country Japan, Mitsuhide Miyaji guided Charmander (Hohenstein out of Naomi elite pref prest PROK by Donnerhall, bred by J.Pleiter of Oldebroek) to place seven.