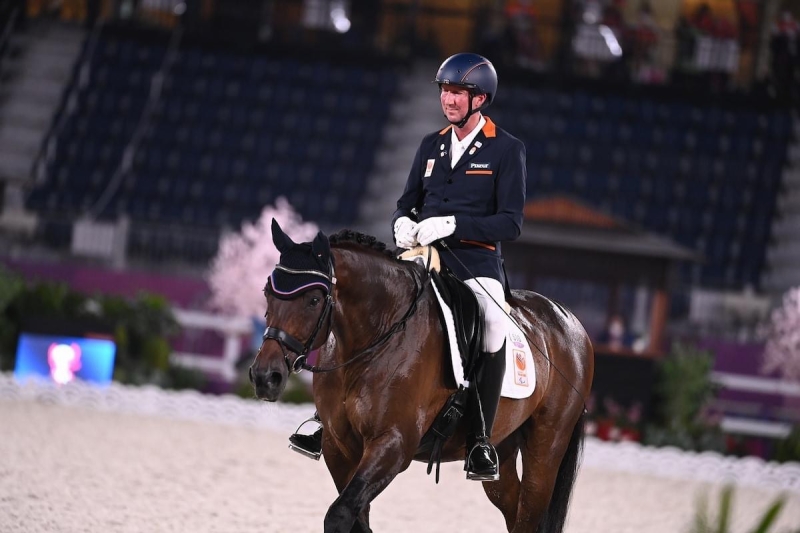 Frank Hosmar and his Sandreo-son Alphaville N.O.P. scored 73.405% in the individual test of Grade V today. Thanks to this score, the combination secured the bronze medal.

The bronze of Frank Hosmar and Alphaville N.O.P. (out of Marcia keur by Iglesias, bred by A. Hendriks from Reek) is the second Dutch medal this Paralympic Games. They had settle behind the Belgian rider Michele George and Best Of 8 (s.Bonifatius) and the British Sophie Wells on Don Cara M (s.Don Jovi). Five years ago, these riders also filled the podium in Rio de Janeiro, Frank won bronze then too. “I am slightly disappointed. Alphaville gave me such an amazing feeling, up front I thought this would be my best test ever, but horses are no machines. We had a few minor errors, but also showed many great bits.”

In the Grade V the best eight combinations may come back on Monday to perform their Freestyle to Music, after the team championships are held on Saturday and Sunday. Half of the horses in Grave V are KWPN-bred, four of which qualified for the freestyle. In close pursuit of Alphaville was the Florencio-son Highlander Delight’s (out of Pijalda MW prest by Jazz, bred by P.G. van Berkel from Holten). Ridden by the German Regine Mispelkamp, he scored 73,191% and obtained the fourth position. Belgian rider Kevin van Ham qualified for Monday with Eros van Ons Heem (Johnson out of Onyx ster by Ferro, bred by H. Vallaeys out of Boutersem). We will also see the Australian Amelia White back after the weekend with her Genius (Romanov Blue Hors out of Comtesse elite sport-dres PROK by Don Schufro, bred by L. Pleunis-Spangenberg from Hazerswoude Rijndijk). Tomorrow, the program features the invidual test of Grade I and III.