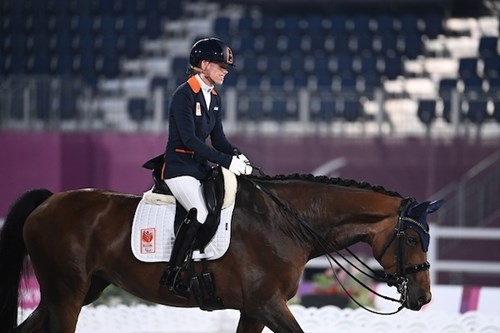 Under the saddle of Rixt van der Horst the Belissimo M-daughter Findsley N.O.P. won a bronze medal at the Paralympic Games today. The combination scored 75.765% in Grade III.

Today is the second day that the individual medals are up for taking in Tokyo. After Grade II, IV and V yesterday, when two KWPN-horses obtained a medal, today it was the turn of Grade I and III. Rixt van der Horst was aboard the mare Findsley N.O.P. (Belissimo M out of A-R. Gila ster pref by Obelisk, bred by Memape Beheer B.V. and N. van Vliet from Oranjedorp) and performed a flawless test, resulting in bronze in the individual championship. Naturally, that also meant Rixt secured a spot in the Freestyle to Music on Monday.

“I was satisfied with my test”, says the rider. “We had a little bit tension because it was our first performance here in Tokyo. Some things could have been a bit better. The leg-yield is normally better. I thought the transitions in the test were nice, the walk was very good. Overall, I had a good feeling. I had hoped to set a slightly higher score here though.”

Maud de Reu steered Webron N.O.P. (Sir Sinclair out of Liane elite prest sport-dres PROK by Landwind II B, bred by J. Seebregts and E.J. Schuyers from Haaren) to the tenth position. Webron transitioned to canter in the extended trot, which cost a significant amount of points. The combination just missed out on qualifying for the freestyle. Tomorrow the Paralympic Games continue with the team championships.