WCYH: Jovian in a league of his own 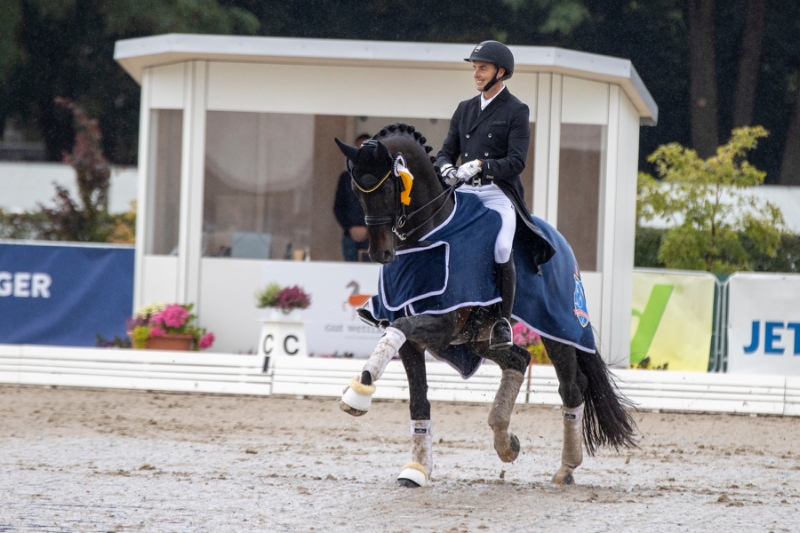 Jovian has just won the first qualification for seven-year-olds in Verden with superior force majeure. With a wonderfully ridden test and a ten for his impressive trot and a 10 for his talent, his score went to 87.145%, more than 5% more than the number two. Renate van Uytert rode both Johnny Depp and Just Wimphof to the finals as well as Jarina des Vallees, who is competed for France.

It was of course not a surprise that he won, but the force majeure with which Andreas Helgstrand's Jovian (Apache out of Zinith elite pref prest EPTM-dr D-OC by Tango, breeder: E.T. ten Bosch of Driel) made the final was overwhelming. For a long time Helgstrand’s wife Marianne was in the lead with Elverhojs Raccolto on 81.888%, followed by the very sympathetic riding Simone Pearce with Quando Unico (81.709%). But Jovian seemed to come from another planet. With so much suspension, beautifully engaged, but also with huge half-passes and on the other hand pirouettes that were turned on a dime, he was the only one to get a technical score above 80%. Add to that the two tens for trot and general impression, a 9.8 for the massive canter, a 9.3 for submission and an 8 for the walk and the total went to 87.145%. That promises something for the final, because that 9.8 could also have easily been a 10!Renate’s twee J’s

Renate van Uytert rode both her stallions to a place in the final. With Just Wimphof (De Niro out of Rastede elite sport-dr IBOP-dr PROK by Riccione, breeder C.Rienks-Kramer) she entered the arena early and showed a very appealing test. The trot had a lot of impulsion and suppleness and was rewarded with a 9.2, the ground covering walk was rewarded with an 8.9. With a technical score of 70.447, her total came at 87.80%, good for 10th place.

With Johnny Depp, Van Uytert had another strong competitor. This time it was the super walk that stood out, but also the beautiful half-passes, and the amazing canter yielded many points. With a 9.2 for the walk, 8.8 for the trot, canter and submission and a technical score of 71,786, the son of Bordeaux (out of Wiana mainly keur pref prest) bred by Breeders of the Year J.A. and B. Naber from Vredenheim came in at 79.493%, good for ninth place.

The last starter was the surprise of the day. The pouring rain could not stop French rider Barbara Clement Klinger from presenting the Everdale daughter Jarina des Vallees (out of Arina elite pref prest sport-dr by Sandro Hit bred by H.B.G. Holleman-Hilderink) in an optimal way. She put down a very strong test that was rewarded with 72.50%. And that also earned her a 9 for the submission rewarded by the judge at C. Jarina is perhaps not the most spectacular horse, but her uphill canter and the appealing trot both yielded high marks, bringing the total to 78.250%. She finished eleventh and earned a well-deserved ticket for the final.
Nicky Snijder fell just outside that final. He had the sympathetic Jongleur STH (Expression out of Bella Vurona STH elite pref prest IBOP-dr Sport-dr PROK D-OC by Fürst Heinrich, breeder B. Nekeman Alteveer) sharp on his aids. The walk was a highlight for him as well, and the half-passes and extended canter were both very beautiful. With an 8.5 for the walk and an 8.2 for submission combined with a technical score of 70.714%, his total came to 75.957 and thus the fourteenth place.

The young rider Kimberley Pap rode the KWPN stallion Jersey in a sympathetic manner to a score of 72.268%. The stallion is blessed with three good basic gaits and the trot and canter were highly rated with 8.3 and 8.2 respectively. The extended trot was beautiful and in the line towards the pirouettes the stallion showed that he already has the ability to sit, but some mistakes crept into the changes. They were 19th.
Marieke van der Putten may have had some déjà vu feelings when she entered the arena with Jameson RS2. Immediately after the halt at x, the gorgeous stallion started to back up and after that he let us vocally know (just like his stable mate Keano RS2 did earlier this week) that he really is a stallion who deserves to be looked at. But we know Marieke; she made the best of it and sat quietly, asking the stallion for his attention, making it a test with highs and lows. The trot reprise was beautiful; nicely uphill, with self-carriage and well-bent half-passes, it was rewarded with a 9. But the walk was barely shown due to the tension, which not only resulted in low scores in the test but also a 5.5 from the judge at C. In the canter, the son of Blue Horse Zack (out of Atilinda M elite pref IBOP-dr sport-dr D-OC from Negro) who is bred by Stal 104, showed his massive quality again, this was rewarded with a 9. With a 6.5 for submission and an 8 for the general impression, the total score came to 70.233% and thus the 25th place.

Under Canadian saddle we also saw the All at Once daughter J'Adoreina (out of Amoreina GC elite IBOP-dr PROK by Tuschinski, breeder B.M. van der Zwaard). Matthieu Bosselier rode a correct test with few mistakes, which gave them a total score of 66.574%.