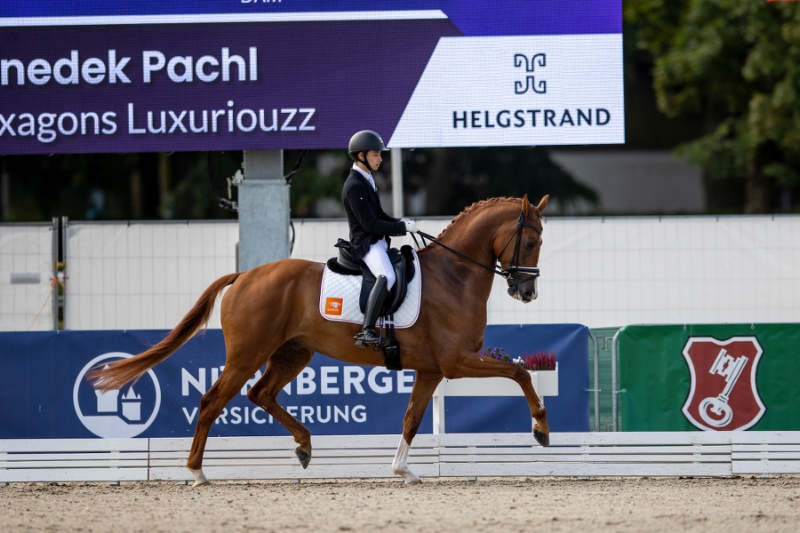 This morning, the small final for the five-year-olds was on the program in Verden as well. Under bad weather conditions, the Hungarian rider Benedek Pachl managed to ride the Johnson-son Hexagon's Luxuriouzz, which is owned by Thamar Zweistra, to the final.

Yesterday, Wendy Plomp’s breeding product (out of Walida van de Waalsehoeve elite IBOP-dr PROK by San Remo) had to deal with some tension, which was mainly expressed in the connection. Today this was much better. During the test he remained much better up in front and stayed nicely off the hand. The judges noticed that too. “Today the contact was much more open. His trot is nicely active, rhythmic and balanced, and he showed a nice medium trot, an 8.8. The walk is big and he stretched nicely forward, an 8.5. The canter has a lot of balance and is uphill. He could cover a little more ground, but still an 8.6. For submission we give an 8.7 and we think a horse with potential for the Grand Prix, for that an 8.5.” All in all, the score came to 8.48, which gave him the last place in the final behind Birkhof's Bohemian OLD under Nicole Casper who scored 8.8 and the very charming mare Polka Fascination M ridden by Dennis Kjaer.Actieve Leonidas

Dinja van Liere did not manage to reach the final with Leonidas. This time her score was 8.02 with the by Rolf Bijenhuis bred son of Trafalgar (out of Gaishia elite sport-dres PROK by Alexandro P). “A horse with an active trot that could be a little more elastic. He sometimes loses balance in the corners and circles, an 8.0. The walk is active but he could come a little more out from the shoulder, also an 8. The canter is nicely uphill and he has the ability to collect but the hind leg could come under a little more, an 8.3. It is a horse that likes to work and is reactive to the aids, but in all gaits we find him a bit tight in the neck. He should also follow the hand more when stretching down, therefore a 7.7. But an elegant and willing horse, for that an 8.1.”

Once again, Fransisco Benito Sanchez was not able to show Lord Platinum optimally. The sympathetic stallion, who had to perform in the pouring rain, can show a very nice outline, but was again very tense, which was at the expense of his performance and was very obvious in the contact. When he was also startled by the umbrellas that passed just behind the empty stands, it was all over and the stallion could no longer find peace. “A horse with an elastic trot that is nicely uphill, for that an 8.8. Before the incident, the walk lacked some rhythm, and afterwards he was for obvious reasons very tense, so a 6.0 for that. But also in the following canter he couldn't really give himself anymore, a 7. For submission we give a 6.5, but you have a good horse, so we hope he will become more relaxed and you can develop his gaits, a 7.3.”

This gave the breeding product of Titan Wilaras (Ferguson out of How Pretty Platinum ster by Bretton Woods) a final score of 7.12 which finished him just behind Natalia Leshchiy with Lemirah Gonda. The long-legged daughter of Krack C (out of Emirah-Gonda Stb-ext by Sir Oldenburg, breeder G.J.W. Verdellen) has an elegant appearance and is blessed with ground covering gaits, but she has some difficulty with the balance. “We don't think it was quite your day because you had quite a few problems with the contact and the balance. The trot is active, but regularly loses rhythm and balance, the mare was also not completely straight and you had trouble keeping the shoulder under you, a 6.8. The walk is clear but could be a bit more active, 7,8. In the canter she should put more weight on the hind leg, a 7.3. And we also have to include these remarks in the mark for submission. She is obedient, but the balance and the shoulders, that go all over the place, make it a 6.8. Overall impression was a 7.2. But a beautiful, long-legged horse that can develop a lot over time.”

And with that, the final of the five-year-olds to be held on Sunday now has four KWPN horses in it.