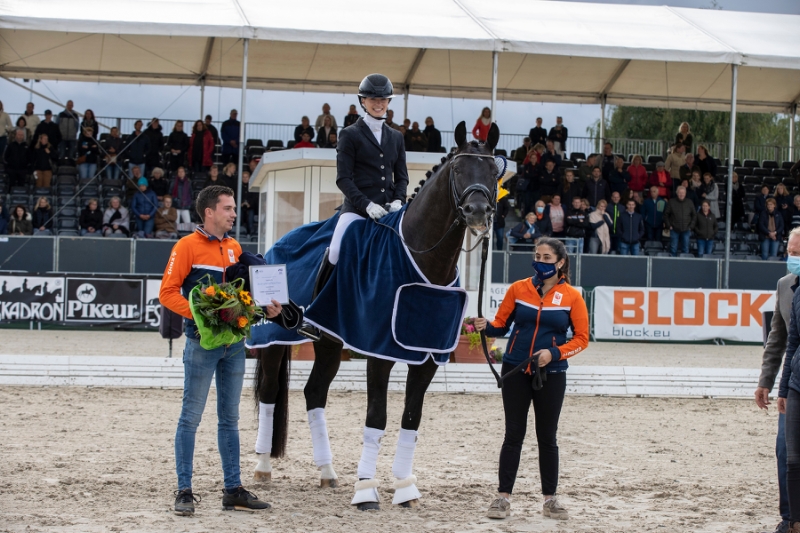 The KWPN stallion Kjento was just honoured as the new world champion for six-year-olds. With enormous force majeure, the powerhouse stallion, who is ridden by Charlotte Fry, won the final in which he was awarded no less than four 10’s by the jury. Thalia Rockx rode Koko jr de La Fazenda to a very nice fifth place. King van het Haarbosch finished in ninth.

It was a super exciting final because there were quite a bit of changes in the top of the leaderboard. Whether it was the nerves or the circumstances, with the occasional heavy rain showers, the top horses of the qualifying round made mistakes and other combinations performed beyond expectations.

Therefore, the atmosphere in de arena was buzzing when the number two of the first round, Escamillo, entered the ring. Ridden by Manuel Dominguez Berna, the Rheinlander stallion by Escolar was again very impressive, but there was some tension and loss of rhythm here and there. As a result, the hoped-for 10’s stayed out. With three times a 9.5, his score came to 93.4. Opportunities for Charlotte Fry who, as always, kept her cool.

Kjento was simply amazing. His massive gaits, the unparalleled use of the hind leg, the elasticity and the self-carriage. Everything seemed to work out, every ridden step was on-point. When the test was almost over, the audience already made themselves heard, which spooked him a bit, but that didn't stop the jury from awarding him four 10’s.

Peter Storr commentated on behalf of the jury: “We can sum up this performance in only one word: Wow! This was really of super quality. The trot has a lot of activity, balance in the extensions and nice shoulder-ins and half-passes. We would like to see a bit more suppleness in the walk, but the canter again has so much balance, with nice clear changes, perfect on the aids, and so beautifully ridden. This horse looks happy, he does his job with pleasure and ease. We don't blame him for the last spook on the midline, that was the audience. What more could we ask for in a horse ? So a 10 for submission and overall impression as well!” And with those four 10's and an 8 for the walk, the score came to a staggering 96%. What a success for Van Olst Stallions and the breeding of the Van Os family.

Thalia Rockx was one of those riders who exceeded themselves and did very well with Koko jr De La Fazenda, bred by her father. The daughter of Toto jr (out of Gerda Nova Elite sport-dr by Romanov) showed a easy and uphill overall picture, and did remarkably beautiful changes. Peter Storr complimented the young rider: “An exciting and quality horse and you rode her very well. The trot is easy and the extensions were ridden with impulsion and lots of energy, an 8.8. The walk has a lot groundcover, and we thought you very nicely kept the medium walk all the way to the pirouettes. The canter has a lot of balance, but should remain a little more through over the back, an 8. But a well ridden test, in which the contact could sometimes stay slightly better connected, an 8.5.” And that mark was also given for the prespective. “Just a very good horse.” And with that Koko jr de la Fazenda came in at 85.20%, good for fifth place and the title ‘Best Mare’.

Jeanine Nieuwenhuis and the KWPN stallion King van het Haarbosch also showed themselves very well today. The son of Spielberg (out of Gina elite IBOP-dr PROK by Florencio) who was bred by L. van Aaken from Wintelre showed a nice, constant test in which he always remained beautifully harmonious in the contact. The extended trot could have been a bit more convincing, but the walk  was beautiful and except for a small mistake in the counter canter,  which Nieuwenhuis was able to correct very quickly, the stallion showed himself much better than on Wednesday. The jury noticed that too. Peter Storr: “Your horse was much more at ease now. He showed a nice elastic trot and was also well presented in the shoulder-ins and half-passes. The walk is groundcovering and clear, the pirouettes were very well executed. Sometimes he could stay a little more through in the top-line, an 8.5. The canter was well ridden, with a positive appearance. Also in canter he could stay a bit more through over the back, an 8. You both did well, that's why we give an 8 for submission. We just think it's a very nice horse, an 8.2 for perspective.” And with that, the score came to 81.4, good for ninth place in this final.

The bronze medal went to the Polish rider Beate Stemler who very skilfully presented the sympathetic and powerful For Romance son For Magic Equesta. The pair scored 86.40% with three nines for trot, walk and general impression.