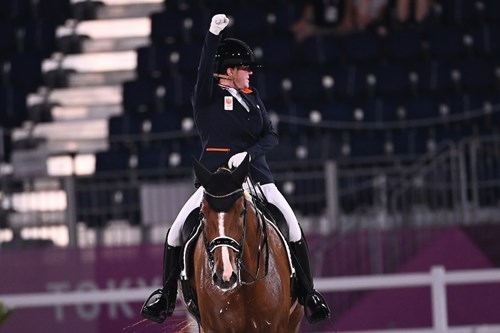 At the Paralympic Games in Tokyo, the Dutch team entirely aboard KWPN-horses won the silver in the team championships today. The bronze American team also included a KWPN-bred horse.

Yesterday, the tests of Grades I, II and III were ridden for the team championships, today it was the turn of Grade IV and V. The Dutch combinations gave it their all and all three performed a flawless test. They eventually secured the silver, but the difference with the golden medal of Great Britain was minimal. The Brits scored merely 0.66% more, giving the silver medal of the Netherlands a golden rim.

Silver for the Netherlands

Rixt van der Horst was the first to perform on behalf of the Dutch team yesterday. She steered Findsley N.O.P. (Belissimo M out of A-R. Gila ster pref by Obelisk, bred by Mamape Beheer B.V. and N. van Vliet from Oranjedorp) in Grade III to 76.235%, a strong start. Today, Frank Hosmar and Alphaville (Sandreo out of Marcia keur by Iglesias, bred by A. Hendriks from Reek) and Sanne Voets with Demantur (Vivaldi out of Kaylee keur prest sport-dres by Elcaro, bred by A.M. Reuzenaar from Schaijk) successfully concluded the competition. As the last rider Sanne procured the highest Dutch score: 78.200%.

The bronze team medal is flying to the United States. Rebecca Hart and the Wynton-son El Corona Texel (out of Urieta Texel elite pref prest EPTM-dres sport-dres PROK by Goodtimes, bred by Wim van der Linde from De Cocksdorp) made an important contribution to this success by scoring 72.206%. The German and Italian team also included successful KWPN-horses. Regine Mispelkamp competed with the Florencio-offspring Highlander Delight’s (out of Pijalda MW prest by Jazz, bred by P.G. van Berkel from Holten) under the German flag, the German team placed 7th. The Italians followed in the eighth position this championship, Bruberry (Lord Loxley out of Punulda sport-dres by Kelvin, bred by Tenwolde Horses from Haastrecht) is participating in her second Paralympic Games with Federica Sileoni.

Tomorrow, the equestrian arena in Tokyo revolves around the Freestyle to Music. Spread out over the various Grades, nine KWPN-horses are in the race for these last, individual medals.