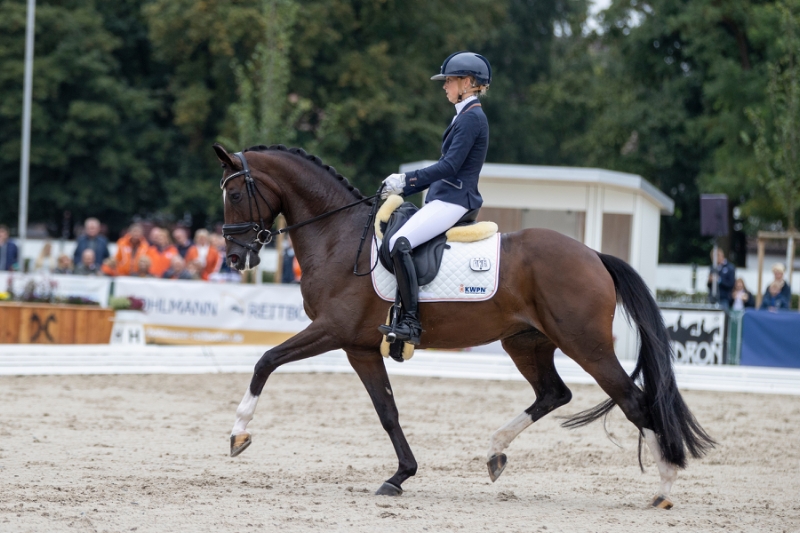 Kirsten Brouwer won the bronze medal with the amazing Ferguson daughter Lightning Star RR. With her beautiful expressive movements she managed to win over the judges and the public. Franka Loos managed to get the fifth prize with Las Vegas. The championship went to Hesselhoej Down Town under Jeanne Hogberg. Silver was for Danciero.

This final was so exciting! In the qualifying round it was already clear that the quality of the five-year-olds was unprecedented. Six horses went over the 90% and again the same number of horses managed to achieve that score. Eva Möller had two strong comeptitors under saddle and after she made some small mistakes with the Grand Galaxy Win-son Global Player, she went the extra mile with Danciero. This Hanoverian stallion bij Dancier was rewarded with 9.66 with a ten for prospectve, but that was not enough to beat Jeanna Hogberg's score with the Danish-bred Hesselhoej Down Town (by Heselhoej Donkey Toy). As a true Happy Athlete he danced through the arena, beautifully on the hind leg, with enormous power and on a nice steady constant. So, as last starter, Kirsten Brouwer had the task to achieve a higher score than his 97%.

But Kirsten really went for it. And what a mare this Lightning Star RR is, with her exceptionally energetic movement, wonderful suppleness and great use of the hind leg. Sometimes this could also work against you at this level because her unprecedented work ethic also meant that she sometimes over-collected a bit and therefore came back just a little too much in the transitions. “A very light-footed, active mare with a strong trot with good use of the hindleg. The extensions were nice, but in the transitions the trot sometimes became a bit too passage-like, a 9.2. The walk is groundcovering, but she could follow the hand a little more, a 9.0. The canter has a lot of power, and she showed nice extensions, a 9.5. She is obedient but especially in the middle part of the test there was a bit of tension, a 9.2. And a 9.5 for this beautiful, well presented mare.” That brought Lightning Star RR, a Ferguson daughter out of Daily Enjoy elite pref IBOP-dres sport-dres PROK by De Niro, who is bred by Titan Wilaras, to 92.80% and with that the bronze medal and the title of Best Mare.

Franka Loos also did a great job with the Pavo Cup winner Las Vegas. With his beautiful uphill frame, the approved son of Ferdeaux (out of Dalia Delin preferably PROK by Wynton, breeder J. Deenen) showed his great trot. Always in balance, with a strong hind leg and lovely use of the front leg. The walk was clear, only in the pirouette was a slight loss of rhythm. But at the canter, all brakes were released. With a huge use of the front leg and a hind leg that is placed under the body with enormous force, he showed that he had to be reckoned with. “A very powerful stallion with a lot of work ethic”, the jury began. “The trot has power, suppleness and he showed good extensions with clear differences between the working, medium and extended trot, a 9.5. In walk, however, he should come through a little more and we didn't feel like we saw his full potential today, a 7.8. The canter is very powerful, uphill and he also kept his balance very nicely in the counter canter. For that a 10. He is obedient, pays close attention to his rider and is good on the aids, a 9.5. A horse with a lot of potential, we give a 9.5 for that.” Unfortunately Franka rode a wrong line in the walk for which 0.5% was deducted and with that Las Vegas came to 92.10, good for a beautiful fifth place in this final.

Dinja van Liere presented Labarron very nicely. The son of For Romance (out of Afanory ster PROK  by Tuschinski, breeder L.M. Bergers-Ketterink) showed easy and forward. He has a very charming, light-footed trot and a nice uphill canter in which he also masters the counter canter and simple changes well. “His trot is light-footed and elastic. He is still a bit quick in the lengthenings, which was especially visible the second time in the frame, but he has a lot of balance in the turns, an 8.2. The walk has good grond cover, good over track, an 8.5. The canter is nice uphill and has energy and balance. In addition, he very nicely maintained the quality in the counter canter, a 9.0. A very obedient horse that shows beautiful transitions. Sometimes the contact can be a little more constant, an 8.5. But a horse with international potential, a 9 for that.” And that brought the total score to 87.6, good for 10th place.

KWPN had four horses in this final, including Hexagon's Luxuriouzz, bred by Wendy Plomp. His 22-year-old rider Benedek Pachl had trouble keeping the son of Johnson (out of Walida van de Waalsehoeve elite IBOP-dr PROK of San Remo) nicely up in front today. Nevertheless, the long-legged chestnut showed again that he has a lot of potential for the future. “You rode a good test, but he seemed to be a little tired. You kept the rhythm well and he was active, but the biggest problem was the contact where you could not always keep him off the hand. He should also show a little more push off the ground from the hind leg, an 8 for the trot. The walk has scope and a good rhythm, an 8. The canter shows a lot of balance, is uphill but he had some trouble in the counter canter where the hindquarters were placed slightly out and he was rushed, a 7.8. The halt was good, but he lost some balance in the medium trot and the half circle in the medium canter, therefore a 7.4. But an impressive horse that can still gain a lot of strength.” And with an 8 for overall impression, the total came to 79.6, good for 15th position. For Pachl there was an extra prize of honour. Because he was the youngest rider in this final, he received a beautiful bicycle, very useful when you live in Holland.