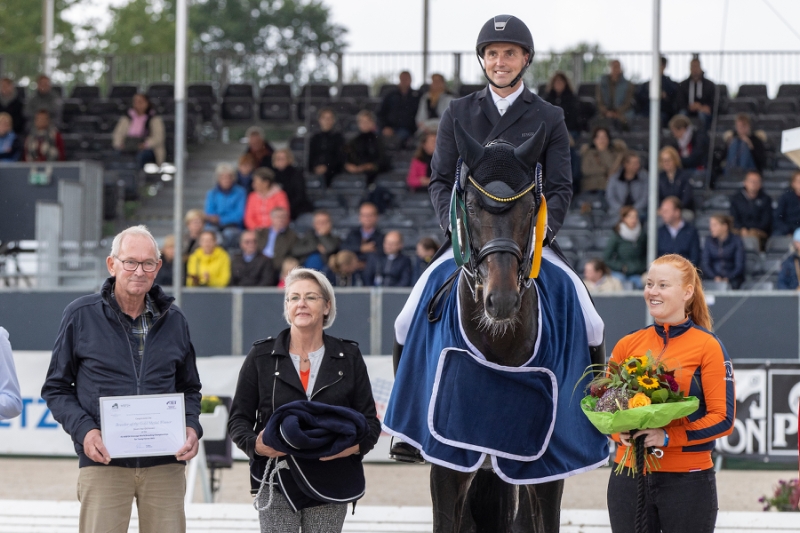 Jovian has just been honoured for the second time in his career as the World Champion Young Dressage Horses. The seven-year-old son of Apache was again in a league of his own and not only showed his enormous talent in movement, but also performed a technically very well executed test. After the gold that was won by Kjento and the bronze from Lightning Star RR, the Dutch anthem could be played again at this World Championship that was so successful for the KWPN.

When it came to who would win the gold, it was of course not very exciting in this final, but a lot did chang on the leaderboard. The moment Helgstrand entered the arena with Jovian as the last starter, Blue Horse Touch of Olympic was in the lead. Ridden by Nanna Skodborg Merrald, the son of Don Olymbrio showed a very appealing trot tour, a great walk and a strong canter reprise with well ridden changes. With three times a 9.6, he received a total of 83.965%. He was followed by the very charming Escolar son Eternity with Anne Mette Strandby-Hansen who received very high marks from 9.5 to 9.8, and also got a very good technical mark but had to settle with a 7.2 for the somewhat limited walk.

Emperor of the day
But Helgstrand and Jovian just did it again. With enormous expression, beautifully off the ground, in rhythm and balance the stallion won to the title with great force majeure. “We call him the Emperor of the Day.” The jury began. “A horse with exceptional balance in the trot, self-carriage, expression, impulsion and just getting every step right, for that a 10. The walk is clean but could cover a bit more ground. He collects well, an 8. The canter is very powerful, with a lot of jump, and well controlled pirouettes in which he lost  s little rhythm, a 9.8. He did a very good test with nice walk pirouettes and good changes. A 9.8 for that. And of course a horse with an unprecedented talent, for that a 10.” With a technical score of no less than 83.072 and 95.20% for his gaits, the total came to 89.136%. For the second time the Dutch anthem was played and this was also gold for the breeder E.T. ten Bosch from Driel, who will receive a breeder's bonus of 1500 euros, made possible by the Friends of the KWPN with this result.

Two top stallions for Van Uytert
Renate van Uytert was clearly very satisfied with the performance of her two stallions in this final. With Just Wimphof (De Niro out of Rastede elite sport-dr IBOP-dr PROK by Riccione, breeder C.Rienks-Kramer) she already rode a very nice test. The stallion again showed that he possesses a lot of panache, he was very loose an supple, over the back to the hand. The canter was amazing, only in the changes he sometimes missed the balance. “A very supple horse with a lot of expression in the hind leg. He uses his body very well and the trot is nice uphill with a lot of shoulder freedom, a 9.5. The walk is clear and matching. He could use his body a little more in the collection, an 8.9. The canter was a bit rushed and could have been a bit more collected, an 8.3. In the first pirouette he lost some rhythm, and he should stay a little better uphill in the changes, an 8.2. But really an eye-catcher, who does his job very obediently, an 8.7 for the perspective.” And with that the score came to 79.565 with which the stallion finished ninth.
Johnny Depp also tried his heart out for Renate. The son of Bordeaux (out of Wiana mainly keur pref prest) bred by breeders of the year J.A. and B. Naber from Vredenheim, is very light-footed and also moves with a lot of spring. The half-passes had a nice rhythm and the walk was clear with a lot of overtrack. In the first pirouette he had some loss of balance, but the canter changes on the other hand were very nice. “We think Johnny Depp is a very handsome stallion. The trot is powerful, expressive, maybe a little rushed in the extensions but with a lot of shoulder freedom, an 8.8. He has a good walk, with a lot of scope, good use of the body and nice in the collection, a 9.3. The canter could be a little more collected, but it is very powerful, especially in the extensions, 8.5. A good test but he could bend a little more in the half-passes, an 8.9. And an 8.9 for perspective for this beautiful horse.” The average got to 80.7% and a very nice seventh place.

Still in top 10
Just behind Van Uytert, the French Grand Prix rider Barbara Clement Klinger finished in the Top-10 as well. With the Everdale-daughter Jarina des Vallees (out of Arina elite pref prest sport-dr by Sandro Hit, breeder H.B.G. Holleman-Hilderink) she amanged to produce another solid test. The long-legged mare has a lot of suppleness, but could stay a little more forward. The image is very sympathetic and pleasant to look at. The jury thought so as well: “You two are really friends, this test pleased us a lot. The mare is light-footed with a lot of suspension in movement. She is a bit rushed in the extensions, but she trots with a lot of shoulder freedom. She should develop a little more power from behind, an 8.3. The walk is clear, with good ground cover, active and with good transitions between the collected and medium walk. The canter has a lot of jump and is uphill, an 8.9. She could perhaps have a little more flexion in the joints and bend in the pirouettes but she listens very well to the rider, a 9 for submission. A horse that works in harmony , for the perspective an 8.6.” And that made the total 78.772%.

Honorary Prize for Kimberley Pap
Kimberley Pap also rode a good test with the KWPN stallion Jersey (Vivaldi out of Kebalia keur pref prest by Ferro, breeder P. Wetzelaer of Herpen) but the pair was not able to show that little bit of 'extra' that she managed to do in the small final. The stallion stood out with his self-carriage though, active from behind and nice in the rhythm. The canter was with lots of power, off the ground. “Thank you for showing us this black pearl”, the jury began. “He has elastic movements and enough impulsion but could show a little more difference in the middle and extended trot, an 8.9. The walk is clear, but it could be a little more through in the body, a 7.4. The canter has a nice rhythm and is uphill, but in the pirouettes he could sit a little bit more. For that an 8.7. Today he had some problems in the changes, a 7.8 for submission, but a horse with a great future ahead, an 8.” And with that Jersey finished in fourteenth place and Kimberley also received an I-pad fro being the youngest rider in the final.