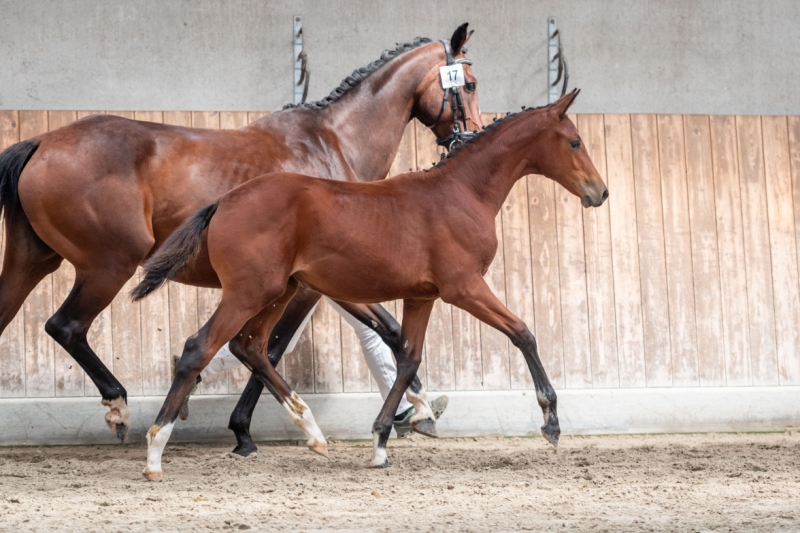 The (foreign) bidders did not miss the auction this time either. With many offspring from Grand Prix sires and World Championship participants, it is a spectacular collection. Bidding is still possible until tonight, the auction closes from 8 p.m.

The dressage foals seem to be in demand. For example, the GLOCK's Dreamboy N.O.P. daughter Rizzoli van de Nethe is currently at 7.500 euros. A potential buyer from the Netherlands has the highest bid.

Bidders from Belgium, Denmark, the Netherlands, Sweden and South Africa
Tangelo van de Zuuthoeve daughter Rockstar W is currently at 5.500 euros. A bidder from South Africa has so far had the longest straw, but has faced competition from various bidders from Bulgaria, Germany, the Netherlands and Sweden, among other things. The highest bid on Livius son Ranger is now 4.500 euros, buyers from the Netherlands are active for him. The second foal of Tangelo van de Zuuthoeve, the colt Raico, is also offered 4.500 euros.

Talented collection
Rockstar NT is part of the collection by Henkie (s.Alexandro P). His dam is the half sister of the Z2 horse Beatrix (s.Special D) and the Z1 horse Senriejetto (s.Kennedy). Sire Henkie is seen as one of the best Gelder stallions who delivered top performances at the World Championships. World Champion Kjento is also the father of a foal in this collection, Rolinda van de Arendsbucht is his daughter out of an Amazing Star dam. Further in the damline we see the Oldenburg approved stallion Abakarde (s.Akzent II). In addition, a Gelder foal is also part of this fourth collection. Robijn NA is a son of the Gelder stallion Floris BS.

Extended by three minutes
Experience shows that especially the last hour of the auction is a lot of bidding. The auction closes at 8 p.m. tonight. The auction always ends for a few foals at the same time. If a new bid is made in the last five minutes, the time will be extended by three minutes. Not yet registered as a bidder? This can be done easily, for free and quickly. We will also keep you informed of all KWPN auctions.

More info via KWPN inspector
During the photo and video day, all foals were assessed by a KWPN inspector and clinically inspected by a veterinarian. The foals are therefore selected for health and correctness, the basis for a promising future. The KWPN inspector will be happy to assist you with all your questions about the foals. In addition, our sponsor can support Horses2Fly in international transport. For questions, please contact Mairin van der Tol via salespromotion@kwpn.nl, 0341-255511 or you can call Wim Versteeg: 06-54201800.