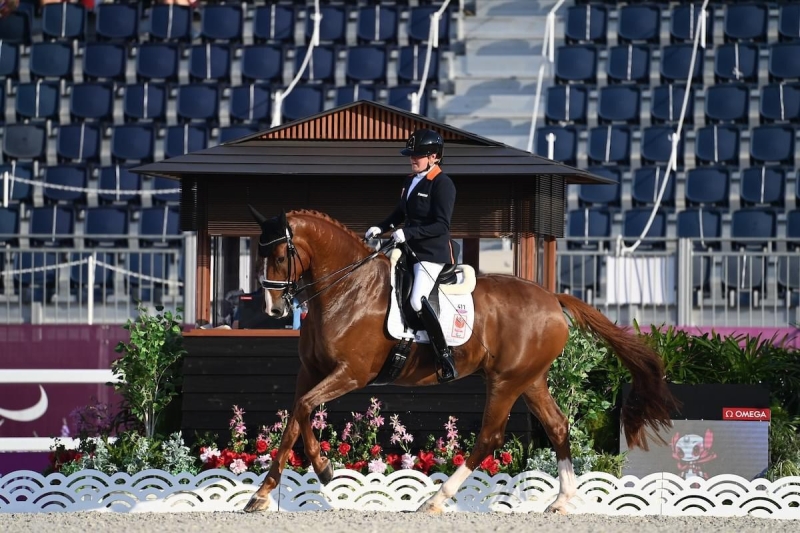 Obtaining a fantastic score of 82.085%, Sanne Voets and Demantur RS2 N.O.P. won a gold medal in the Grade V Freestyle to Music at the Paralympic Games. The silver was secured by Louise Etzner Jakobsson and Dreamcatcher-son Goldstrike B.J.

After the gold individual medal, Sanne and Demantur were the tipped favorites for the title in the Freestyle to Music. “A plan that has come together,” she exclaims enthusiastically. “You can arrange, control and prepare many things yourself, but in the end, you have to let it go and let it happen. And I did today. Every test I performed here was better than I ever did before. Three flawless test and we were able to peak at the right moment. There have been so many people involved in this journey to this incredible goal, you want to make them proud. Demantur has fantastic owners (RS2 Dressage Center, red.), but also my parents, friends, sponsors, the physiologist and the veterinarian: everyone plays a part in this success. The grooms of the Dutch team are standing by our sight to take care of all the horses, like a well-oiled machine! The atmosphere at the championship is also amazing, everybody is happy for each other and hopes the best may win.”

Prior to the trip to Tokyo, Sanne followed an acclimatisation process to let Demantur get used to the high temperatures. “He felt great right from the start of the warming up. Most riders bring a trainer, but I had my groom that helped me get focused. You know how to ride that test, but it is difficult to not overthink it under the pressure of the championship. It was 38 degrees Celsius today and we received the advice to do the warming up in the indoor arena and stay out of the sun. The indoor arena is slightly cooler but lacks any wind. I did the first part of my warm-up there and then we cooled the horse down in the cooling tent, after which I did a few more minutes outside with Demantur. We then went back to the cooling tent once more and from the tent we headed straight to the ring. Today I received the compliment that Demantur dealt with the heat the best of the entire Olympic and Paralympic Games, he came out of the ring with the lowest body temperature. I had read up on this in the best possible way so I did not have to rely on my gut feeling, but really use all the knowledge and information available. Demantur is very fit and eventually that’s what matters most. As a rider, your first task is to ensure your horse feels comfortable.”

The Swedish rider Louise Etzner Jakobsson won silver aboard Goldstrike B.J. (Dreamcatcher out of Pamberley ster prest sport-dres by Jazz, bred by B. Jelgersma). The combination received 75.935% for their freestyle to music.