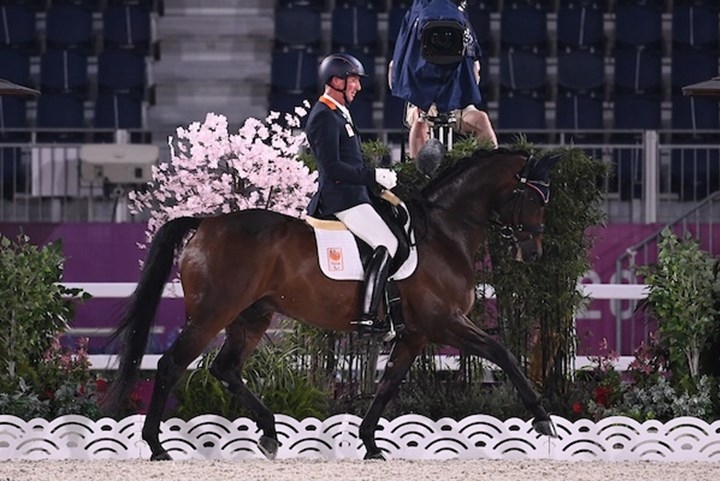 In the freestyle to music Grade V at the Paralympic Games in Tokyo, KWPN-horses take home both the silver and bronze medal. Frank Hosmar steered his Alphaville to silver, Regine Mispelkamp grabbed the bronze with Highlander Delight’s.

Belgian rider Michelle George won the gold medal based on an 80.590% score on Bonitfatius-daughter Best Of 8. Frank Hosmar came close with his 80.240% but had to settle for silver with his Alphaville N.O.P. (Sandreo out of Marcia keur by Iglesias, bred by A. Hendriks from Reek). The bronze medal in this Grade was claimed by the German rider Regine Mispelkamp aboard Highlander Delight’s (Florencio out of Pijalda MW prest by Jazz, bred by P.G. van Berkel from Holten). It must have felt like redemption after her fourth place in the individual test to now score 72.660% and secure a medal in the freestyle to music.

Frank is satisfied with the performance of his 16-year-old Alphaville. “He improved every day. On Thursday, I had to encourage him. Yesterday in the team championships and today in the freestyle he was super. I am thrilled with these medals. The scores awarded by the jury were slightly disappointing, however. Similar to yesterday, the British judge brought down my score significantly. That cost me gold twice.”

The sixth and eight position of this championship also have a orange touch. Genius (Romanov Blue Hors out of Comtesse elite sport-dres PROK by Don Schufro, bred by L. Pleunis-Spangenberg from Hazerswoude Rijndijk) obtained the sixth position for Australia with Amelia White. Belgian rider Kevin van Ham directed his Johnson-son Eros Van Ons Heem (out of Onyx ster by Ferro, bred by H. Vallaeys from Boutersem) to place eight.