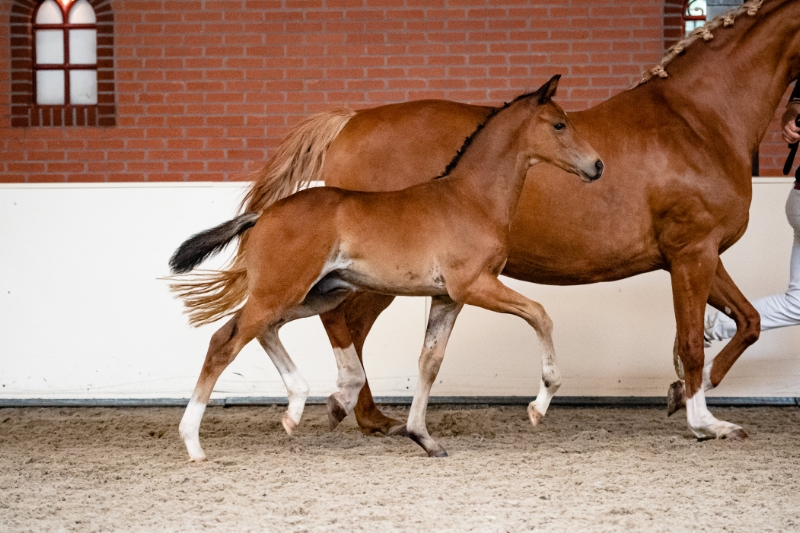 The fifth foal collection was presented this week at the KWPN auction platform. From the 10th to 13th of September, online bidding is possible on 19 jumping and 14 dressage foals. Among them is a half-brother of the international 1.50m stallion Flying Dream, an offspring of the preferent jumping stallion Arezzo VDL, and dressage foals sired by World Champion Glamourdale and Dutch Champion Just Wimphof.

Both proven and young stallions are well represented in this collection. In terms of dam lines, the well-known Sinaa, Leva, Niki and Sijgje lineages appear in this fifth foal collection. During the photo and video days, all foals were assessed by the KWPN inspector and a veterinarian. This means that all the foals are selected on health and correctness, which makes sure they have a promising future.

Show jumping bred
This collection definitely includes interesting show jumping bred foals. For example, the Douglas colt Rouglasryal K comes from the same dam as the KWPN approved stallion Flying Dream (s.Zapatero VDL), which -after an exceptional performance of 87 points- has meanwhile been placed in the international 1.50m classes. Ready for Takeoff SKR (s.Jardonnay VDL) also represents a solid family, as he is related to well-known Grand Prix show jumpers like Nirvana, Tadmus, Edinburgh, Tyson and Zandor. The filly Rouge Fan'E Five descends from Marlon Zanotelli’s upcoming Grand Prix stallion Grand Slam VDL and comes from the direct dam line of the KWPN approved stallion Glenfiddich VDL. A lot of sport also comes from the dam line of the filly Rivella-D (s.Diarado), who is related to the Grand Prix stallion Nagano (s.Lux). The colt Roelof-Jan (s.Jardonnay VDL) was bred out of a half-sister of the international 1.50m show jumper How's My Name (s.Spartacus) and comes from the direct line of Gerco Schröder's Grand Prix mount Glock's Zaranza (s.Karandasj). The Bustique son Ropario was bred from a full sister of the KWPN approved stallion Fire (s.Vleut), who is already competing at 1.50m level. The filly Rosinaa (s.Zirocco Blue VDL) has a proven pedigree, as her dam is a sister of the international 1.50/1.55m level competitors Celebrity VDL and Bugatti.

Great origins
When it comes to the dressage foals, Royalty Ventura (s.Dimaggio Black) is something special. This colt was bred out of a half-sister of the KWPN approved international Grand Prix stallion Capri Sonne Jr (s.Rhodium) as well as the international Small Tour horse Independent Little Me (s.Uno Don Diego). Rharzar (s.Glamourdale) also originates from a proven performance line. This filly was bred out of a full sister of the international Grand Prix dressage horse Vinzar of Coen van der Vlugt. Also interesting for sport and breeding is the filly Ramina (s.Taminiau), whose granddam performed at ZZ-Zwaar/fifth level after she did an excellent EPTM test of 86 points. The granddam of Rhapsody Sijgje LMD (s.Sir Donnerhall) also performed at ZZ-Zwaar level and produced Aat van Essen's Intermediate horse Walskoning (s.Jazz). The granddam of Rembrandt van Altrido (s.Lloyd) performed in the Small Tour and the filly Romee Ludine (s.Merlot VDL) comes from the same dam as the Mecklenburg approved stallion G-Star (s.Glamourdale) and thus also represents a proven damline.

More information
The collection can now be found at www.kwpn.auction. After registering on our website, biddings are possible from Friday the 10th of September until Monday the 13th of September. On the last day, the biddings will close from 8PM CET. We are happy to provide you with more information about the collection. In addition, our sponsor Horses2Fly, can take care of the transport of your foal. For any questions you can contact the KWPN inspector Wim Versteeg on +31(0)6 54 20 18 00 or Mairin van der Tol via salespromotion@kwpn.nl or +31(0)341-255 511.