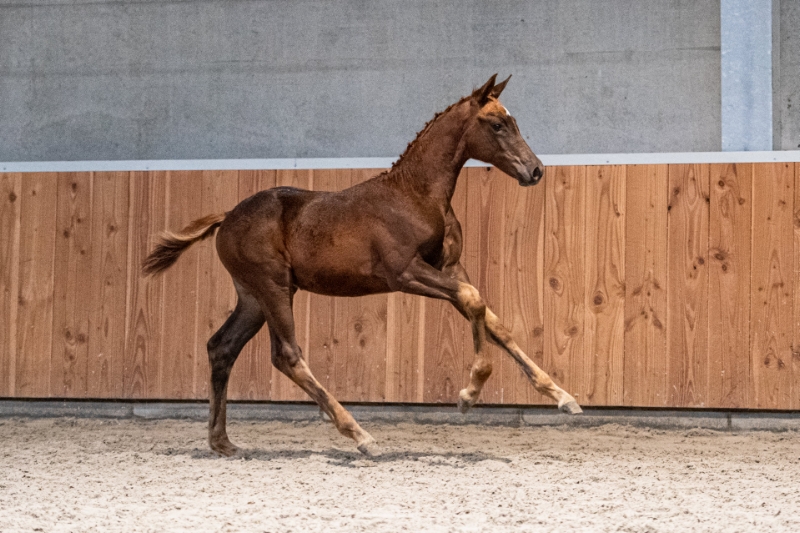 From the 24th till the 27th September, online bids can be made for the sixth foal auction on the KWPN Auctions platform. The collection includes 21 dressage and 15 show jumping foals, descending from stallions such as Cornet Obolensky, Pegase van ‘t Ruytershof, Eldorado van de Zeshoek, Ferguson, Chippendale, Dream Boy and no less than four foals by World Champion Kjento.

First-class damlines are represented within this collection. Several foals are bred from dams or half-sisters of international sport horses. During the photo and video days, all foals were assessed by the KWPN inspector and a veterinarian. This means that all the foals are selected on health and correctness, which makes sure they have a promising future.

Jumping foals
This collection also offers many interesting foals for lovers of jumping horses. For example, Roscoe J.E. (by Chopano Z) was bred out of a half-sister of the Grand Prix stallion Carbani (by Carolus II) with which Ali Rahmati performed. Royal Livano (by Inaico VDL) comes out of a half-sister of the Grand Prix horses Fantast (by Indoctro) and the stallion Unaniem (by Numero Uno), and Riva T (by Kensington) was bred out of the direct damline of the former top horse of Timothy Hendrix, the Cantos son Very Nice. Riavanta van ‘t Kattenbos (by Opium JW van de Moerhoeve) has the same granddam as the Grand Prix horses Dyranta van het Rhen (by Kashmir van Schuttershof) and RR Bellerose (by Kashmir van Schuttershof). In addition, three foals are bred out of mares which have jumped at least 1.30m level themselves, such as the Pegase van ‘t Ruytershof son Rockstar whose dam jumped at 1.35m level and is an international eventer, and the dam of the Cornet Obolensky son Rivelino is an international 1.35m level performer.

More information
The collection can now be found at www.kwpn.auction. After registering on our website, biddings are possible from Friday the 24th of September until Monday the 27th of September. On the last day, the biddings will close from 8PM CET. We are happy to provide you with more information about the collection. In addition, our sponsor Horses2Fly, can take care of the transport of your foal. For any questions you can contact the KWPN inspector Wim Versteeg on +31(0)6 54 20 18 00 or Mairin van der Tol via salespromotion@kwpn.nl or +31(0)341-255 511.