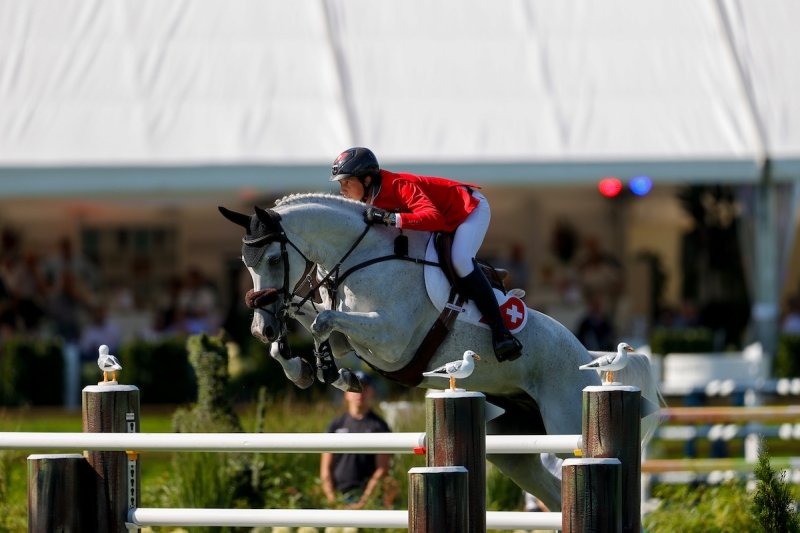 At the European Championships Jumping in Riesenbeck (Germany), the individual silver medal was obtained by the Swiss rider Martin Fuchas aboard his grey Leone Jei (s.Baltic VDL).

65 horses traveled to Riesenbeck to compete in the European Championships. Out of these 65, 7 were KWPN registered. Wednesday September 1st, the first qualification for the team championships took place, followed by the second qualification on Thursday. Friday, the final of the team championship was scheduled. Swiss won bronze in a convincing manner (KWPN-bred Leone Jei was part of the team), Germany won silver and Belgium bronze. Saturday was a rest day and Sunday it was time for the battle for the individual medals.

The participating KWPN-horse were the following:

What a performance by the Swiss Martin Fuchs and his grey Leone Jei (studbook name Hay El Desta Ali by Baltic VDL out of Dara ster pref IBOP-spr PROK by Corland, bred by G.M. van Mersbergen from Udenhout). At the opening’s day, the pair placed fifth with 1.31 penalty points in the 1.50m class. On Thursday, in the second qualification of the team championships they even climbed up to the first position on the intermediate rankings. In the individual final on Sunday the grey incurred four penalties in both courses, thereby securing the silver medal!

The big bay gelding Ermindo W (Singapore out of Aziza-W elite sport-spr PROK by Carinjo, bred by A.P. de Wit from Reuver) was ridden by the Swedish Rolf-Göran Bengtsson. In the first leg they ensured a strong start by placing eleventh with 1,96 penalty points. A clear round in the first round of the team championships brought them up to third place. In the second round, the pair dropped two poles. During the individual final on Sunday, they had one rail down in the first round, eventually resulting in an overall 13th position.

The Italian Antaonio Maria Garofalo finished the opening’s day with 6,10 penalties aboard Conquestador (Nabab de Reve out of Melissa stb prest by Farmer, bred by J. Pennings from Berlicum). This put them on the 40th position at the time. In the second round they added eight more penalties, dropping them to the 44th rank with 14,10 penalties. However, they picked only five penalties in the team final and thereby climbed up to the 38th position.

The Verdi TN-offspring Faquitol-S (out of A Capitola-S ster prest IBOP-spr sport-spr PROK by Carolus II, bred by the Van Straaten family from Den Ham) was ridden by the Hungarian András Kövy Jun. In the opening’s course on Thursday, they placed 43rd with 6,56 penalties. In the second round they added seventeen penalties, eventually resulting in the 57th position.

Marc Houtzager steered his Calimero 2nd round viewing PROK (Quidam de Revel out of Maifa ster prest by Libero H, bred by Stal Horn BV in Oud Ootmarsum) to a ninth place in the opening’s round. In the second course they added eight penalties, dropping the combinaties to the 29th rank. In the final of the team championships, they performed an impressive clear round, thereby rising to the fifteenth spot again. Marc decided to refrain from riding the individual final.

Jan Stetina and his stallion Gylord (Mylord Carthago out of Rachel M reg. A prest by Cash, bred by W.M. Jansen from Hoog-Keppel) represented the Czech Republic. In the first round, the pair accumulated 8,27 penalties. In the second course they withdrew from competition.

Also defending the colours of Czechia were Vladimir Tretera and his Gangster v/h Noddevelt (Eldorado vd Zeshoek out of a daughter by Careful, bred by A. van Rooy from Berlicum). After the first round they combination incurred 5,68 penalties, obtaining a 37th position. In the second leg they added 17 penalties.