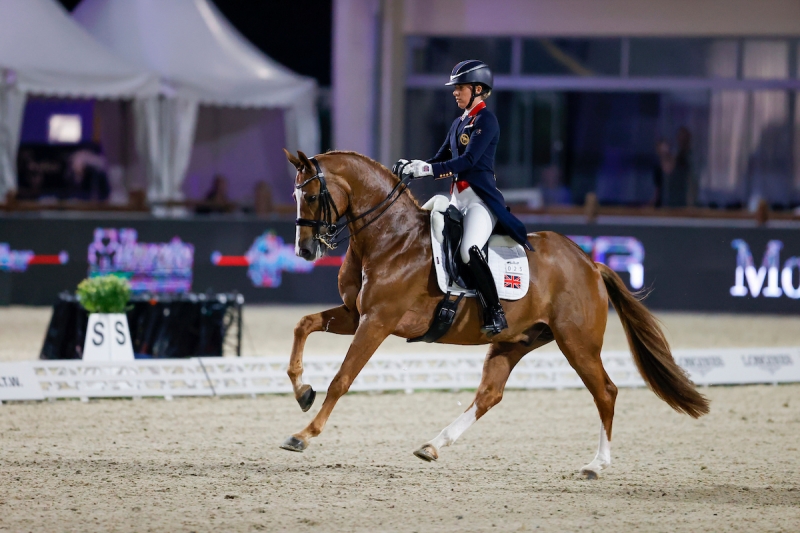 At the European Championships Dressage in the German Hagen, the chestnut Gio (s.Apache) won an individual bronze medal and a silver team medal.

69 horses had come to Hagen to participate in the European Championships. Out of these 69 horses, 20 are KWPN registered. On Tuesday September 7th, the first half of the contestants made their appearance in the arena. On Wednesday it was the turn for the other half to ride their Grand Prix test, after which the team medals were distributed. Great Britain won silver with three KWPN-horses in their team.

The following KWPN-horses performed at least two tests at the European Championships Dressage:

The British rider Charlotte Dujardin is having quite a season with her chestnut Gio (Apache out of Zenzi elite prest IBOP-dres D-OC by Tango, bred by H.J. de Jong from Gorinchem and Ad Valk from Gorinchem). Fresh off the heels of a invidual bronze medal in Tokyo, the pair added another individual bronze medal to their list of accomplishments. Great Britain won silver in the team championships. In the Grand Prix, the combination placed third with 79,829%. In the Special they missed out on the podium by placing fourth with 79,787%. In the freestyle to music, Gio and Dujardin went all out and scored a fantastic 87,246%. This ensured them the individual bronze medal!

Charlotte Fry also achieved some fantastic results with the KWPN-approved stallion Everdale (Lord Leatherdale out of Aliska K elite EPTM-dres PROK by Negro, bred by P. Kluytmans from Tilburg). During the first test, the Grand Prix, they placed fifth with 77,67. In the Special they repeated the feat with 78,146%. The rider was able to keep up the momentum and secured another fifth position in the freestyle to music. She steered her stallion to 84,721%. The British rider also contributed towards the silver team medal and she scored three new PRs.

Juliette Ramel has been one of the driving forces of the Swedish team for years. Aboard her Osmium-son Buriël K.H. (out of Ronja K.H. ster pref prest by Krack C, bred by P. Bakker from Oterleek) she placed ninth in the Grand Prix with 76,196%. In the Special, the combination procured 76,9% and the seventh position. The gelding ranked ninth in the freestyle to music, passing the eighty percent line with 80,175%.

Carl Hester and the black gelding En Vogue (Jazz out of Nicarla elite sport-dr PROK by Contango, bred by A. van de Goor from Herpen) were essential in the team silver of Great Britain. In the Grand Prix they placed twelfth scoring 74,845%. In the Special, the Jazz-son moved to the sixth rank with 77,310%. High artistic scores ensured a thirteenth position in the freestyle to music where they gathered 78,375%. They also traveled back home with a silver team medal.

The best Dutchman in the Grand Prix was Hans Peter Minderhoud and his KWPN-approved stallion GLOCK’s Dream Boy N.O.P. (Vivaldi out of Resia elite prest PROK by Ferro, bred by T. Coomans from Oud-Beijerland). Their Grand Prix was rewarded with 74,503% and a thirteenth place. Minderhoud guided Dream Boy to the sixteenth position in the Special with 73,632%. After the Special he decided to withdraw his stallion from the freestyle to music.

It was the EC senior debut for Dinja van Liere and Haute Couture (Connaisseur out of Destiney preliminary keur PROK by Krack C, bred by J.M. van Uytert in Heerewaarden and A.J.C. Drost from Dreumel) was a strong one. In the Grand Prix the pair placed fifteenth with 74,208%. The combination then obtained 75,699% in Special, resulting in the ninth place. In the freestyle to music, the rider was very close to the magical 80%. It turned out to be a 10th position with 79,668%. The mare was breaking all her personal records on German soil.

Another KWPN-horse that also competed in Tokyo was the Negro-offspring Elegance (out Reina elite pref  prest sport-dres PROK by Monaco, bred by G.J. van Olst from Den Hout) ridden by the Spanish Beatriz Ferrer-Salat. In the Grand Prix, they placed seventeenth with 73,898%. The combination obtained 71,748% in the Special, thereby procuring a top-20 position.

Marlies van Baalen represented the Dutch team. She had saddled her Go Legend (Totilas out of Litchy elite sport-dres pref prest PROK by Ferro, bred by Wittenberg Stables) and received 72,531%, the 21st position. It was unfortunately not the EC the rider had hoped for. In the Special, the pair scored 69,377% and ended up on the 26th rank.

The KWPN-approved stallion Governor-STR (Totilas out of Orleans elite pref prest PROK by Jazz, bred by J.B.J.M. Streppel from Wilp) gathered 72,484% on his first EC. Ridden by Adelinde Cornelissen he placed 23rd in the Grand Prix. The pitch-black stallion was eighteenth in Special with 72,143%. Due to the withdrawal of GLOCK’s Dream Boy N.O.P., Cornelissen was allowed to start in the freestyle to music. Unfortunately, the combination was excluded from competition.

Charlotte Heering, defending the flag of Denmark, scored 70,669% in the Grand Prix (23rd place) with her fifteen-year-old Bufranco (Negro out of Franka ster prest by Zevenster, bred by Fr. C. Kroot from Haghorst). In the Special they stepped it up by scoring 71,018% and placing 24th.

Dior S (Spielberg out of Wolivia L stb PROK by Florestan I, bred by the Lemmen brothers from Maasbree) and the Hungarian rider Anikó Losonczy set a personal record by scoring 70,046%, which resulted in the 29th position. In the Special, the pair placed 28th with a score of 68,343%.